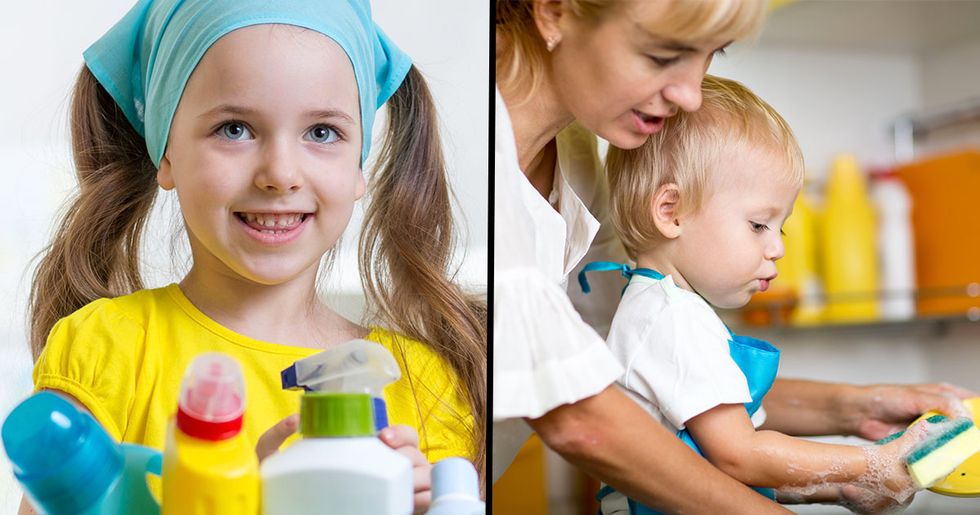 Any parent will agree; it's super important to teach our kids that they must work for what they get. It's a simple fact of life that if you want something, you must work to earn it. Period.

Even us adults will remember the absolute pain in the ass of doing chores. Who wants to take out the trash or do the dishes when there's socializing to be done or many hours to be spent playing video games?

But how on earth do we learn the value of life by having everything handed to us on a silver tray? Life doesn't work like that and here's why kids who have been raised doing chores turn out to be the most successful and well-rounded people.

Let's be real honest with ourselves here. No one enjoyed doing chores when they were a kid. I know I certainly didn't!

That moment of dread after dinner...

The majority of us will remember that moment after dinner when our parents would instruct us and our unfortunate siblings to do different, but equally as boring, jobs. Washing the dishes, taking out the trash, cleaning the bathroom, ironing, hoovering... the list of chores is endless.

The act of assigning chores to kids is becoming old fashioned, it seems.

Kids doing chores dates back centuries, and it seems that it is recently becoming looked at as an old-fashioned method of parenting. Many children are born with a silver spoon in their mouths, and despite that not being their fault, it's something that will mean that they're brought up thinking that they'll never have to work for anything themselves.

It is super important for children to learn how to work.

Julie Lythcott-Haims, a former Dean of Freshmen at the University of Stanford and author of How To Raise An Adult, has been conducting research into the very matter of children doing their chores.

Lythcott-Haims' research found a link between doing chores and happiness in later life...

"By making them do chores," she said to Tech Insider, "taking out the garbage or doing their own laundry, they realize they have to do the work of life in order to be part of life."

Stressing the importance of contributing as a family...

"If kids aren't doing the dishes, it means someone else is doing that for them," Lythcott-Haims continues, "and so they're absolved of not only the work but of learning that work has to be done and that each one of us must contribute for the whole."

Children must learn that family life works through teamwork and that all members must do their part in keeping the household tidy and organized.

It's not just family life that this practice effects...

Getting kids to do chores from a young age doesn't just contribute to a healthier family life, it apparently contributes to making these children grow into well-rounded adults and good employees, too.

Kids who are raised doing chores are more likely to become employees who collaborate well with co-workers...

This link has been determined due to the fact that children who have been doing chores their whole lives know firsthand what struggling looks like. They will be more likely to take on tasks independently and will always try their very hardest at something before asking for help if needed.

Lythcott-Haims suggested that employees who grew up doing chores will be happier to help others, as, especially those who have siblings, will realize that teamwork is essential in getting a job done quicker; and teamwork is what makes the perfect employee.

Lythcott-Haims wasn't the first to study this field of research in the upbringing of children.

Her insights have come from the Harvard Grant Study; the longest longitudinal study ever conducted.

The study has been going on for seventy-five years...

It's been revolving around the factors that drive human happiness - and it was found that people who did household chores growing up turned out to be overall happier adults in later life.

Children who do chores learn that they are part of "an ecosystem."

So what about the children who don't do their chores?

Remember Charlie And The Chocolate Factory?

Who could forget the spoiled brat that was Veruca Salt? Roald Dahl's character, the spoilt brat, was brought up by her wealthy father who gave in to her every demand. I highly doubt that Veruca did any of her chores...

Studies have been conducted around spoiled children.

A study of the articles, letters, and advice published in more than 300 parenting magazines between 1920 and 2006 found that children are now only asked to take on "trivial responsibilities," which include feeding a pet and doing only their own dishes.

Doing chores can be an antidote to "teenage listlessness and rebellion."

Markella Rutherford, assistant professor of sociology at Wellesley College of Massachusetts, stated that doing meaningful chores that contribute to a household is vital in the upbringing of children and adolescents. "This was seen as especially important for adolescents. Until very recently, greater autonomy and responsibility were emphasized as antidotes to teenage listlessness and rebellion."

Responsibility is a huge part of becoming an adult...

Children who have never experienced any form of responsibility will grow up to be narrowminded and selfish adults, but, today, more and more parents are feeling the need to bribe their children. "In the past, parents didn't feel the need to bribe children because they were confident chores benefited their kids by making them feel both responsible and an active part of family life," Rutherford explained.

Rutherford continued, "added to which, children of the past would not have expected to be bribed because their parents taught them to take pride in a job well done."

But the most important thing...

When raising a child, the most important aspect is to help them develop into well-rounded and decent human beings. Arrogance and laziness do not bide well in adult life, and a child brought up to think that they can get through life by not contributing to their household will sadly fall down this path.

So maybe it's time to start doing the dishes...

Whether your kids like it or not, doing their chores will do them the world of good. It may be boring and a complete pain in the ass right now, but it's all worth it to raise a well-rounded and respectful human being.