Why Was This Student Given Detention for Wearing a Sweatshirt and Jeans? | 22 Words 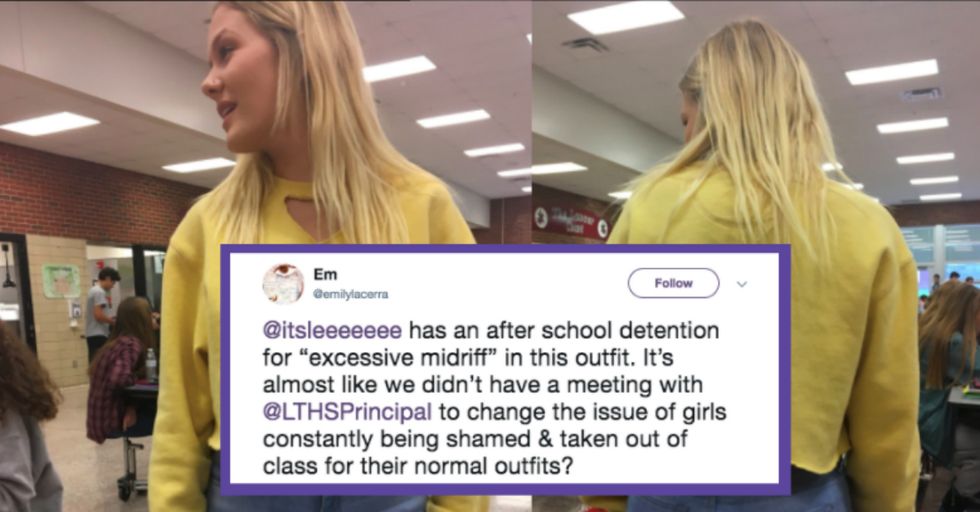 Why Was This Student Given Detention for Wearing a Sweatshirt and Jeans?

Another day, another story about a bizarre dress code violation.

Seriously, it seems like female students get sent to the principal's office for pretty much anything these days. It's hard enough to find your own style as a teenager, but throw unreasonable dress codes into the mix and there's truly no way to win. Young women these days might be better off just cutting armholes in a sleeping bag. Or — here's a thought — maybe schools could stop implementing dress codes that scrutinize women much harsher than they ever do men.

Here's the outfit in today's story:

A yellow sweatshirt. And a pair of jeans. That's what a high school student named Hailey wore to school last week. Her friend Emily posted a picture of the outfit, adding that Hailey had been given after-school detention as a result of the outfit.

How dare she! A sweater! AND JEANS?! Oh, the humanity! What a scand– Oh. Oh, wait. No, that outfit is actually completely fine.

Apparently, the school decided that Hailey's outfit showed too much midriff. They also chastised her for showing off cleavage.

What cleavage, you ask? Well, there isn't any. Go ahead and scroll back up to confirm. There's no cleavage.

Obviously, people are outraged at the way Hailey was treated.

@emilylacerra @itsleeeeeee @LTHSPrincipal When pulling a girl out of class for wearing jeans and a sweatshirt is mo… https://t.co/soFaizW54l
— Jess (@Jess)1510248935.0

When will people learn to stop policing women's bodies? When will we take girls' education as seriously as we take their male counterparts'?

Even some of the school's alumni are weighing in on the situation.