Why Were These Models Strutting Through New York's Times Square in Their Underwear? | 22 Words 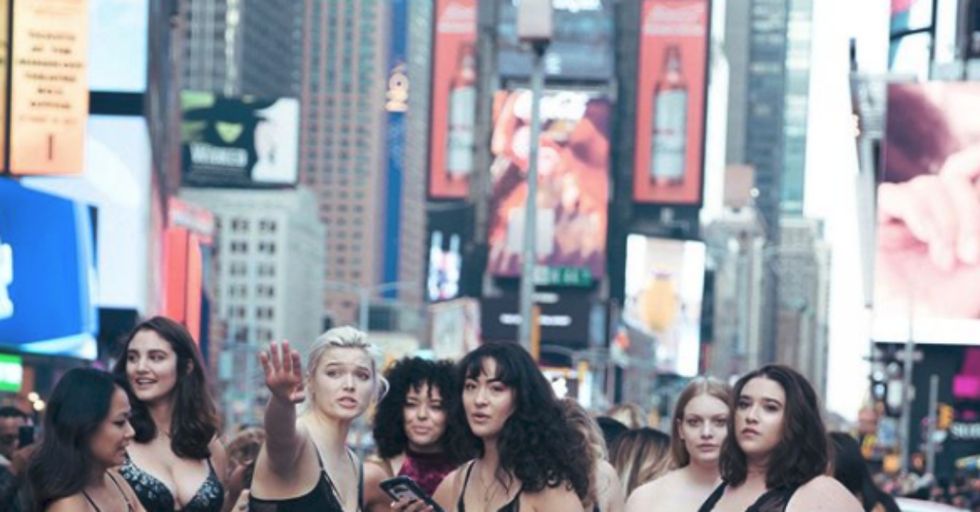 Why Were These Models Strutting Through New York's Times Square in Their Underwear?

It's not unusual to be walking in Times Square and to see something that makes you do a double take. That's kind of Times Square's whole vibe. But if you were in New York City's most popular tourist trap recently, you might've noticed some models walking around in their underwear. You'd have to be a robot to not stop and take notice.

Don't worry — nobody stole their clothes. Instead, it was a guerilla-style fashion show right there in the busiest part of town, staged by body positive model KhrystyAna.

They called it "The Real Catwalk" and it wasn't your average runway show, with a bunch of women who looked like one another. It was a diverse celebration of all shapes and sizes.

The idea to stage this catwalk had been brewing in the model's mind for quite awhile.

In a statement to Yahoo! Lifestyle, she said, "I’ve been a body positive activist for almost a year now, and the more this whole BoPo movement grows, the more creative ideas I get about women empowerment. So this #theREALcatwalk was brewing and in discussion for months now, and I’d organized two small scale all-inclusive lingerie runway shows this year, but this time it was different."

As everyone knows, timing is everything.

Which is why this event came at an important time, quickly after the famed Victoria's Secret fashion show aired around the world. It's one of the most popular television events, but it's also something that celebrates only one type of body.

In fact, it's the opposite. The point of the entire thing is to be inclusive and celebrate all body types. But it doesn't mean the frustration isn't there. "This is exactly when so many of us ladies feel so discouraged about our bodies and faces. We look at these beautiful VS models and get deeply affected, sometimes not even consciously, by the overwhelming standard of one kind of beauty. Neglecting to represent the many other types or ideals of beauty can make us feel unattractive, as if we need to change to become more like those girls," she explained.

If you have a vision and dream you're passionate about, why waste time?

Which is why KhrystyAna put the show together in just a couple of days, thanks to the enthusiasm from her fellow models. "A lot of models from our agency were very excited to walk this ‘flash mob’ style fashion show," she said. The actual event was more than anyone could've hoped for...

The beauty about the body positivity movement is that at the heart of it, it's all about inclusion.

KhrystyAna knew that if she couldn't include everyone, she didn't want to put the show on.

"I didn’t want to make it just about the curvier women, and I would only go full out organizing like this if I knew it was ALL inclusive," she said. It's very easy to fall into the societal norms of only thinking one type of person is beautiful. It's a battle women continue to fight through the years.

The turn out was truly incredible, and lived up to what KhrystyAna hoped it would be.

"There will be transgender women, women of different ages and sexual orientation, full made up face and some with no make up, waxed or unwaxed legs, vegans, and carnivores," KhrystyAna wrote on Instagram when promoting the show a few days before. And there were tons of excited and supportive onlookers," she said. How could anyone not stop and support such an amazing scene?

Not only were the spectators moved and encouraged, but those who participated in the event were equally astounded.

"I am able to stand here today because of the women in my life. I grew up depressed & considered taking my life in my early twenties. I finally chose to be happy by following the lead of women in my life," one model wrote in an Instagram caption.

The success will hopefully pave way for more in the future.

"We hope this is not the last #theRealCatwalk we do," KhrystyAna says. "I’ve been getting messages from women from various countries requesting to do this in their cities. The truth is, anyone can do it. It’s for all women!" She's an inspiring trailblazer, and the world better be ready to handle whatever she has next.