Wife Fails That Pretty Much Sum up Married Life | 22 Words 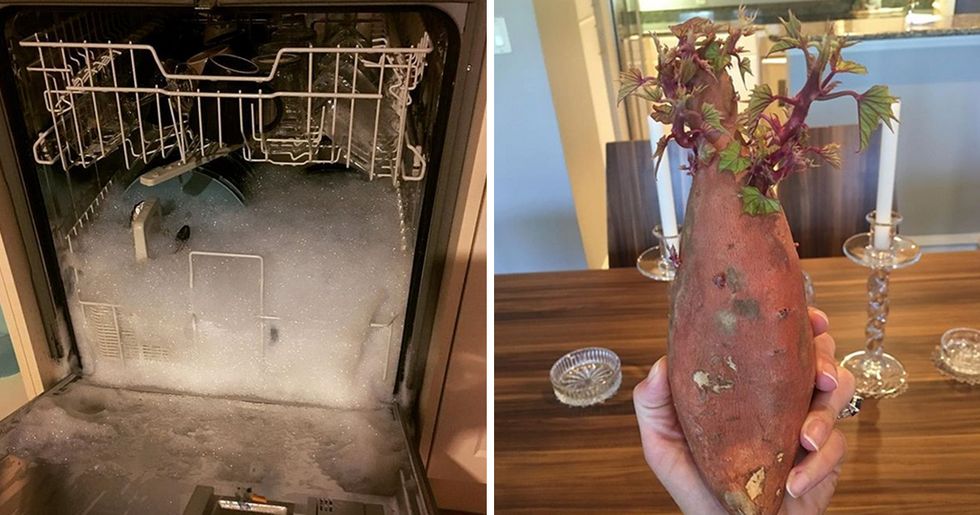 Wife Fails That Pretty Much Sum up Married Life

Being married is pretty much the best thing ever. It's basically like having a sleepover with your best friend every single night. You get to love new family members, form new traditions, and make the rules for how the two of you are going to run your own household.

Being married also means that you get to experience new failures that you might not have thought possible before you tied the knot. While the fails happen no matter who your other half is, today we're going to be focusing on wife fails. The Internet is pretty full of them!

As a wife, I can admit that I'm certainly not without fault. For instance, I still have no idea which HDMI input goes to which electronic devices, and I'm not particularly motivated to figure it out anytime soon.

You may not be a fantastic cook, but I bet you can handle toasting a bagel, right? On the other hand, maybe it's harder than it looks.

It's our wedding anniversary today & we stuck with our usual tradition. He bought me flowers & I completely forgot. #wifefail
— Sara Sheridan (@Sara Sheridan)1506107034.0

Hey, it's nice to have traditions. At least you remembered how many years you've been married, right?

In an update: I also got wrong how many years it has been. #hopelessbutmakesgoodstewapparently
— Sara Sheridan (@Sara Sheridan)1506108268.0

Well, you're zero for two on this one. You can make up for it next year, though– just set a reminder on your phone.

Eric told me this morning that he has been showering at the gym for the past week because they have clean towels and we don't... #wifefail
— Mary Wynne Imhof (@Mary Wynne Imhof)1461860561.0

Sometimes the laundry piles up; sue me! (And while Eric is being very resourceful, something tells me that he could probably manage to do a load of towels.)

Didn't quite think that one through.

As it turns out, making cakes in the shape of tiny clothes is pretty much done in one situation and one situation only. Still, it was a very thoughtful thing to do!

Call this a fail if you must; I'd just start saying that I was growing food for next year's dinner. Way to plan ahead!

So that's what happens when you try to wash a foam pillow. That is good to know.

I don't know what that is, but it is decidedly not cornbread. Are you sure you didn't grab a couple coal briquets from the garage?

Who would have guessed that adding soap to a washing machine would be a bad thing? I'm glad someone else made this mistake before I did.

Time for a haircut!

It's not that bad. Maybe you'll start a new hair trend!

This one is pure gold.

I would absolutely read that book. I'm surprised J.K. Rowling didn't think of that herself, actually.

This is terrible news unless you are someone who enjoys plugging only one end of a cable into your computer. If that's the case, then you're going to have a great time!

Hey, it's the thought that counts, right? Plus, everyone needs socks.

This is an easy mistake to make!

I'm learning so much about laundry today. Mostly that it can be very destructive. It's probably safer to stop doing it altogether.

One of these things is not like the other.

Everyone remembers the happiest day of their life. For some people, that day is the day they met Rob Lowe.

This wife got the cake; she just forgot the candles. I say the cake is the most important part. No harm, no foul.

Freezer paper is not the same as parchment paper!

Another thing that's good to know! I would have done the same thing.

Somebody cooked the cookbook.

My wife tried cooking Thanksgiving dinner for us and actually burned the cook book. from funny

It's called a cookbook for a reason. Probably because you're meant to cook it. Right?

Were these supposed to be edible?

Sorry to break it to you, but those are not ribs. Maybe they were at some point, but they aren't anymore.

On the plus side, your counters are now expertly seasoned. Some people pay a lot of money for that.

Just save the balloons and keep them for next year! I'm pretty sure that's how balloons work.

You did your best.

Hey, it can be hard to reach every area of the back! Of course, that's usually when it's your own back and not someone else's.

This one actually made me gasp.

I'm not saying this is grounds for divorce. But you should probably get a lawyer.

That's not how that works.

My wife using an outlet. from mildlyinfuriating

She tried. Bless her heart, because she tried.

When my wife does the dishes, I have to do a silent bit of cleanup just for myself from mildlyinfuriating

Maybe after she finally figures out how to get the roll in the right place, she can finally start leaving the toilet seat up.

What's she supposed to do? Waste precious effort breaking the box down and putting it in the bin? Actually, bring it out to the trash can herself? I don't think so.

This one is too real.

I am 100 percent guilty of this. I want my water to be fresh, even if it means using five different glasses each day. Share this with your spouse!