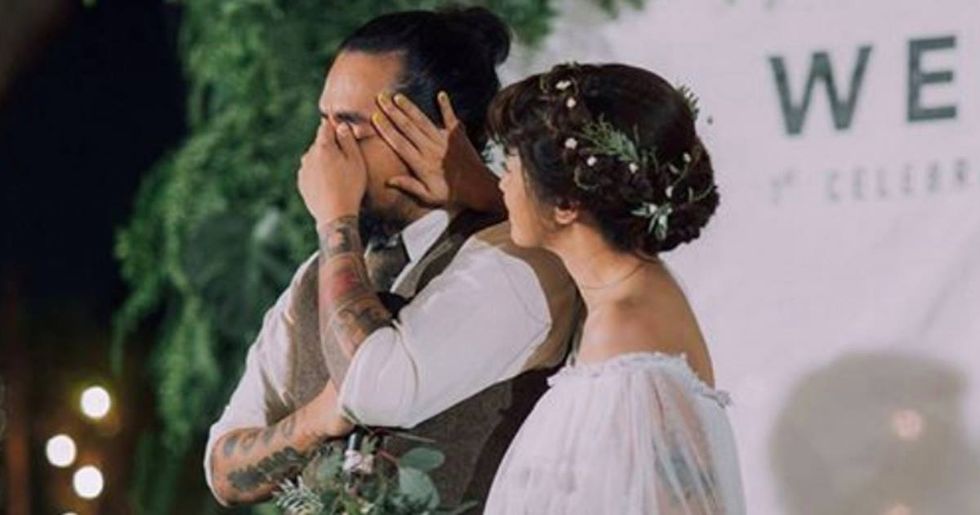 Wedding days are a nerve-racking time for most involved, but usually it’s the good kind of nerves. You know the type: butterflies in your stomach, your heart racing in anticipation for the next step in your life.

One bride-to-be experienced a completely different type of nerves though when she stood at the alter and revealed the sordid details of her husband-to-be’s affair to her wedding congregation.

You see, the night before her wedding she revealed a number of texts from a number she didn’t recognise, exposing her fiancé’s double life and turning her world upside down.

The woman, Case (names have been changed to protect those involved), told all in a post on Whimn, revealing how she came to terms with her alleged betrayal and got revenge in the most dramatic way.

The night before her wedding, the bride-to-be had been enjoying drinks with her bridesmaids when her phone buzzed. She walked over to it, expecting to see a message of congratulations in anticipation for the big day.

What she didn’t expect was a number of texts from an unknown number, showing screenshots between her fiancé, Alex*, and another woman. She claims the screenshots were accompanied by a message, reading ‘I wouldn’t marry him. Will you?’

Put that fairytale wedding on hold

As proof, the woman sent pictures of her with Alex (the groom), along with texts between the two which detailed their affair – dating from months to just days before.

The texts ranged from: "This weekend. You and I. It is on, hot stuff. Bring your A game." To: "Your body is f*cking incredible. And sh*t do you know how to use it. I wish my GF had half the skills you do."

Cry your eyes out

Casey, the bride, claims she knew immediately that this was real and she quickly began to piece things together, believing she was a fool for not realising sooner.

Her friends demanded she call off the wedding but she couldn’t think straight, so she decided to sleep on it instead. When she woke, she claims she knew exactly what to do.

She would go ahead with the wedding, but instead of reading her vows she would ‘out’ Alex as a cheater, reading the texts to their family and friends.

She walked down the aisle, turned to the crowd as she reached the alter and said: "There will be no wedding today. It seems Alex is not who I thought he was."

Where did we all go wrong?

As soon as the words left her mouth, she said a ripple of shock went through the church before Alex attempted to grab her hands. She resisted, taking out of her phone and reading the messages out loud.

As she continued to read the messages, she claims the colour drained from the groom’s face before he walked out of the church, his best man following him.

Things will never be the same again

She then turned back to the crowd and said: "I love all of you and as horrible as this is I’m glad you all are here. There will not be a wedding reception today, but instead, there will be a celebration of honesty, finding true love and following your heart even when it hurts."

It's quite easy to pick up on the signs the other half is cheating on you if you look reallyreally closely at their behaviour...

Sexting is a bad idea

Who cheats on their other half when everything is actuallyrecorded in the form of solid, hard evidence? You'd not want to marry an idiot anyway.

Guys guys guys...when will you ever learn...you can delete your side of the messages but you don't have control of theirs! Girls have each others backs! (after the deed has been done in this case though)

Some guys are just wired to be perverts...I guess you could almost blame her for falling for his antics in the first place?

The final piece in the puzzle, now it all makes so much sense, all those late nights back home, all of those times he asked you how to spell "massage" while he was texting under the sheets at 3.00 a.m

You don't have to be a detective to figure out if your man is up to no good...although that magnifying glass might come in handy when you're reading through the small print in the divorce papers.

Being single has its benefits! Embrace it. A ring on your finger can get really annoying when you think about it, having to take it off at airport security to get past the metal detectors...what a drag!

Would you remain friends?

"Let's just be friends" is something a lot of people part ways with when exiting a relationship, although in this case it might be better off not talking....although you should expect to recieve a few midnight texts though, he's got a history of that.

Hang out with your friends for company, you don't want to be on your own mourning the end of a relationship.

Or if one of your best friends is ice-cream, then why not hang out with ice-cream! Happiness can be found at the bottom of each tub.

Drowining those sorrows is an easy "go to" method of forgetting, but you do run the risk of making contact with the offender...is it worth the risk? Almost certainly.

Cat's never hurt anyone...well not on purpose anyway...ok, they often hurt people on purpose...but they can be good company. Find one to hang out with, preferably your own, you don't want to get caught hanging out with someone elses cat.

He'll be worse off

And remember that no matter how bad you're feeling after the break up from hell...he'll most likely be feeling worse, and if he isn't, then he's probably a sociopath who you should have dumped a long long time ago.

A break up is always a good excuse to get back in the gym and get fit. There's no better revenge than looking your best.

When there's tonnes of guys swooning over you, it'll be sure to leave some egg on the face of your ex-fiance. Figuratively and perhaps literally depending on how good your aim is.

Maybe you'll have another chance?

And before you know it you'll be dating again, maybe even fall into a long-term relationship again and who knows, another proposal might be in the works?

It would be nice this time if it made it all the way to the honeymoon...a new personal best!