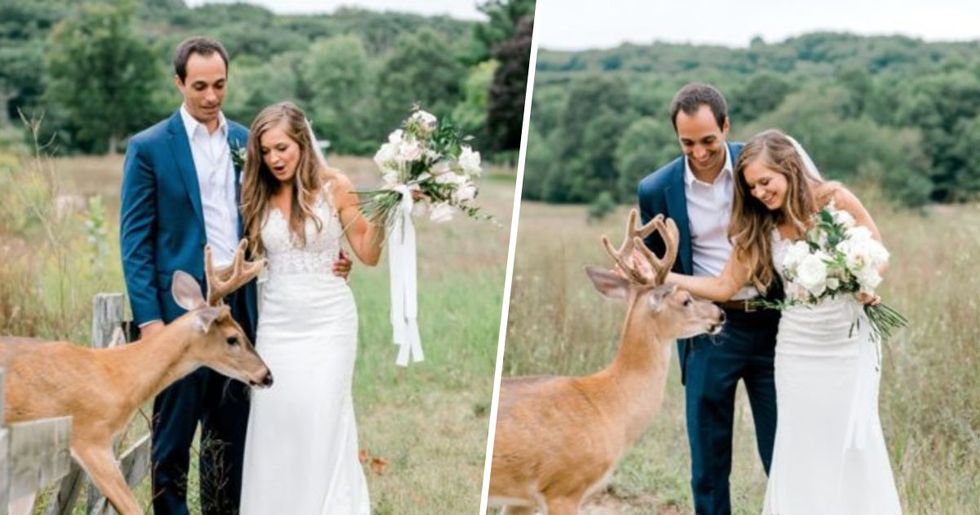 When you picture your future wedding photos, you don't exactly imagine being surrounded by wild animals, do you? Well, I'm sure this couple didn't either.

But during the photoshoot on their happy day, one gatecrasher completely stole the show - A wild, yet thankfully very friendly deer.

The animal expertly photobombed the couple during their photoshoot, and contently nibbled on the brides' bouquet, resulting in some amazing photos. Keep scrolling to see the photoshoot, which certainly puts every other wedding album to shame.

And she takes the most stunning photos for couples on their happy day.

Everyone wants the photos from their big day to be perfect.

And Laurenda certainly delivers. Her portfolio boasts an impressive array of beautiful weddings in the most gorgeous locations.

From beaches to countryside manors...

And all the way to lush green forests, Laurenda has done a vast variety of different wedding shoots.

But the one thing her shoots don't usually include?

Animals. Wild animals, to be precise.

Wild animals tend to have no place in wedding photoshoots...

Well, unless it's an adorable wild deer with a keen hunger for flowers, that is.

One couple's photoshoot stood out from the rest...

Because of the curious deer that decided to steal their spotlight. Newlywed couple, Morgan and Luke, were celebrating their nuptials on the Felt Estate, in Saugatuck, Michigan, when Bennett stole them away for their “golden hour portraits."

However, someone gatecrashed the shoot...

Now, while most wedding gatecrashers tend to completely ruin a couple's big day, this particular gatecrasher made the photoshoot even better.

Their new guest quickly became the star of the show.

The friendly animal greeted the couple but quickly made a beeline for Morgan's bouquet.

The mischevious deer quickly climbed over the fence...

And proceeded to reach for the bouquet, clearly hungry for some flowery snacks. “We walked over this hill and made it to a field where we saw just over a wooden fence was a deer," Bennett told The Dodo. “As soon as we arrived, the deer looked up and just casually walked over to the bride and groom."

The couple seemed to find the whole thing hilarious...

And they can be seen laughing in disbelief as the deer stood directly in front of them during the shoot. “He started reaching his neck over and grabbing flowers from her bouquet and just chewing away," Bennett said. “Then he steps over the fence so he’s standing in front of them, and he’s just hanging out eating her bouquet."

But they didn't let their new friend spoil the shoot.

At first, the couple didn't know what to do with their new friend. But they decided to just continue with the shoot. “We were all kind of giggling and looking at each other like, ‘What’s going on? What should we do?’" Bennett said. “Morgan’s expressions were priceless — they just kind of made the photos."

They used their gatecrasher as an opportunity...

Luckily, the deer was incredibly friendly.

And seemed content to quietly munch on Morgan's bouquet while Bennett snapped away.

The deer stopped at nothing to feast on the bouquet...

But Morgan held onto it as long as she could. Anything for a great photo, right?

But the deer was relentless...

She really wanted that bouquet, didn't she?

The bride eventually decided to give the hungry animal her bouquet...

When the couple returned to the field later that night, they found that the deer had left something behind for the bride — a little wedding gift.

“When we walked back to the area where we dropped the bouquet, the deer was gone but there was one white rose still intact," Bennett said. "She picked it up and joked, ‘It’s the final rose.’"

Amazingly, the full shoot was caught on camera, too.

Laurenda shared the adorable photoshoot to her Facebook page.

She wrote, "Deer: 1. Bouquet: 0. When the field you want to take bride & groom portraits in has an overtly friendly deer...you roll with it until the deer decides the bouquet is lookin' like a good snack. Morgan & Luke, you rock. Much more from your beautiful day to come!"

And people in the comments were loving the shoot.

Many were quick to note how this couple's marriage got off to the most wonderful start, and how brilliantly they handled the full situation.

Though not all weddings go quite so smoothly...

Keep scrolling to hear some of the most disastrous wedding tales...