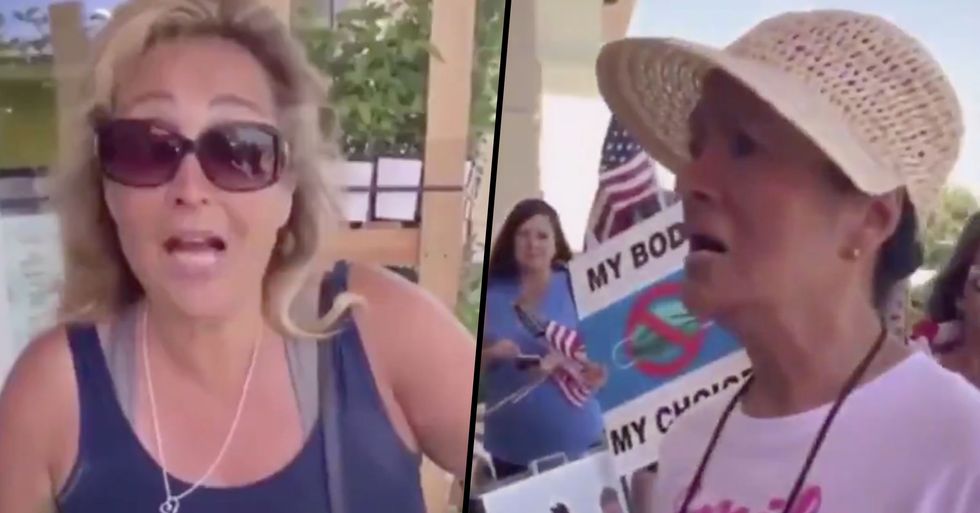 The "Karen" meme started out as a lighthearted joke, but now these women really aren't playing. In fact, they seem to be multiplying quicker than you can say coronavirus.

One "wild pack of Karens" was spotted doing what they do best outside a grocery store in California. I'd like to say you'll be shocked by their argument, but you probably know what's coming...

Over the last couple of months, "Karens" have been sprouting up all over the place.

Having an opinion on pretty much anything and everything they could possibly start an argument about.

From racist rants to anti-mask parades, for some unknown reason, they seem to enjoy making a scene.

We can't help but notice that it is often middle-aged white women at the center of many of these scandals...

And there seems to be no way of reasoning with these people...

Especially when what they're saying is based on faulty assumptions.

There's just no way of getting through.

A “wild pack of Karens" has recently been spotted outside of a grocery store in California.

They were filmed taking part in an anti-mask rally on Saturday... Obviously.

The original Facebook live-stream has made its rounds across social media this weekend.

All because of one "Karen" and her extreme overreaction.

After being blocked from entering due to store policy requiring customers to wear a face mask.

The women were protesting against COVID-19 restrictions.

Which originally started elsewhere but somehow managed to end up here.

The video starts off with one Karen tying to get inside.

“I don’t know what country I’m in," the woman says. “I thought I was in the United States."

The woman filming claims that the store is “keeping customers hostage."

Due to the front doors reportedly being locked.

Another Karen can be heard in the background saying this “is worse than Communism."

Yep... I don't want to live on this planet anymore either.

And the craziness didn't stop there...

From Donald Trump flags, to signs stating that masks are a form of “child abuse." There really was no chill from these women.

As the clip continues, people get increasingly agitated.

“This is a war crime," says one woman. “This is crimes against humanity happening right now…"

Oddly enough, I don't have any sympathy for these women right now.

And Twitter users who watched the viral video sure don't either...

If only the women could really hear what they're saying.

Eventually, the police arrive on the scene.

Although it's unclear from the video what happened next.

The Orange County Register reports that two women from the protest were arrested.

On suspicion of trespassing.

These sure are crazy times we're living in. For more "Karen" news, keep scrolling...