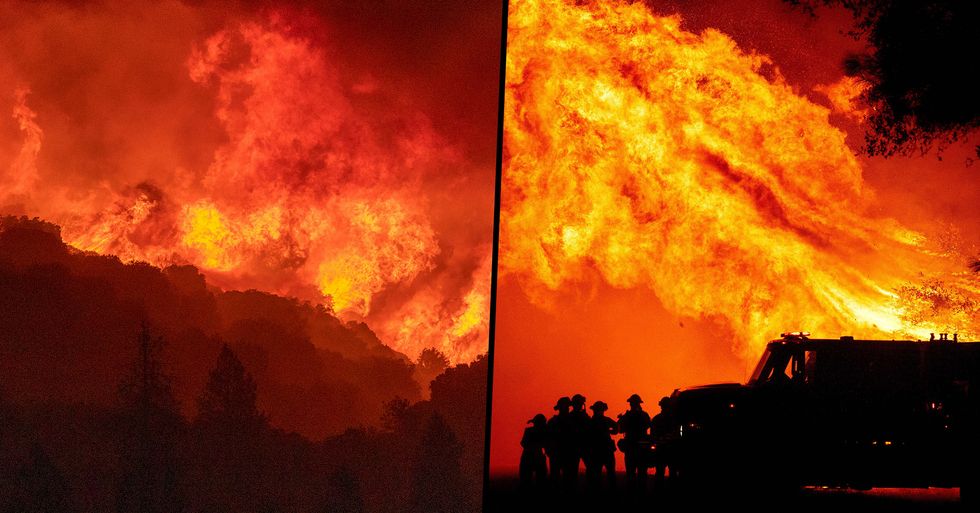 Unsettling pictures and videos continue to roll in of the fires in California, and they're just another reminder that the blaze is only going to get bigger...

The fires burning on federal land north of Sacramento are the largest we've ever seen...

6 of the twenty largest fires California has ever seen have taken place this year, with Cal Fire putting the August Complex Fire at the very top of its list.

The El Dorado Fire, which has grown to more than 10,000 acres, was ignited when a family used a “pyrotechnic device" for a flamboyant gender reveal.

Over six-hundred firefighters were called to tackle the blaze...

Which became so bad that it could even be seen from satellites in space.

California Governor, Gavin Newsom, was forced to declare a state of emergency in 5 counties.

It's a truly dire situation.

And, as the days roll by, more and more photos from the blazes have been emerging from panicked residents across the country.

The fires have engulfed California's skies into a murky orange hue...

3.1 million acres have been incinerated in California this year, and Gov. Gavin Newsom blames climate change...

There are currently 102 active fires that have burned millions of acres in twelve states across Alaska and the West.

The August Complex Fire consists of thirty-seven fires that were sparked by lightning this August.

So far it has burned a huge 471,185 acres and is only twenty-four percent contained.

Terry Krasko, a spokesman for Forest Service said that the fires could actually be a lot bigger than that.

He said an airplane with "infrared capabilities that measure the size of the blaze" wasn't able to record the fires, as it was out of service.

Krasko said that while the smaller fires have been extinguished.

The larger parts of the fire just keep getting bigger.

Federal officials say that increased temperatures and offshore gusts have caused the fire to grow angrier over the weekend. Although the temperatures are said to get lower over the next few weeks.

President Trump has even given his opinion on the matter...

We've clearly got a long way to go, let's just hope we can get the blaze under control soon.

For more on the gender reveal party that triggered one of the largest blazes, keep scrolling...