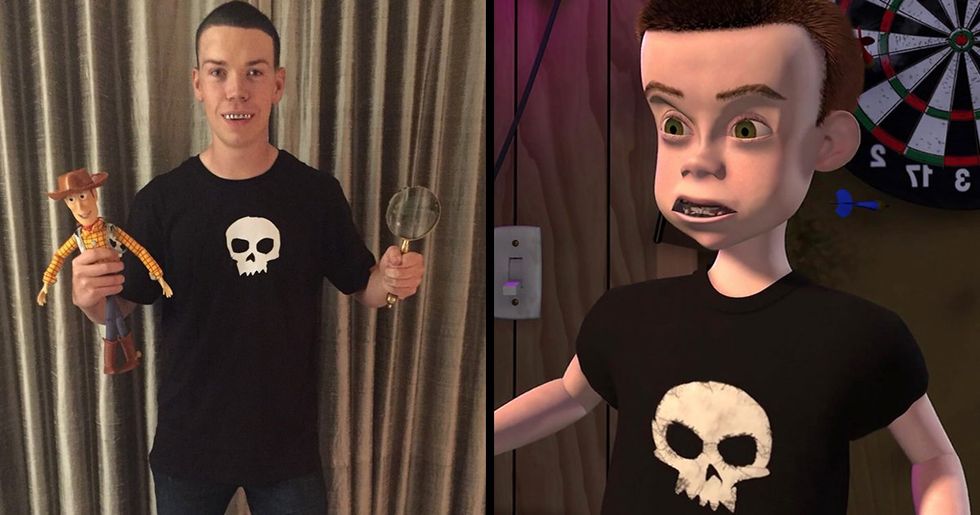 Will Poulter Dresses As Sid From Toy Story For Halloween

You may recognize Will Poulter from his role in movies like We're the Millers or The Maze Runner. Or you may know him by his British accent and animated eyebrows. Either way, he's a well-known actor who (like many of us) also happens to enjoy dressing up for Halloween.

This year, Will took the opportunity to address his uncanny resemblance to one of the animated characters in Pixar's Toy Story, for his costume. And the Internet just about lost their mind. Now, you may be thinking, "Isn't it a bit hard for someone to resemble an animated character?" But believe me, when you see them side-by-side, you won't be able to tell who is who.

Sid is the maniacal, young next-door neighbor, who likes to torment dolls and toys. Some may say that he is even a "bully." And I would agree with that. Any kid who wears a skull on their shirt is scary to me.

He's been called Sid's look-alike before.

Poulter stated in a tweet that he's decided to "respond to the comparisons" with his costume, due to the fact that many people on the internet have pointed out the similarities. Although, Poulter (unlike his costume) has different standards when it comes to bullying.

To Poulter, dressing up as Sid is not all fun and games.

Poulter stated in a Tweet that he would like to "raise some attention" for AntiBullying Pro, a UK-based program in which he is an ambassador for. While the Internet can have their fun at seeing Poulter dressed up as his animated doppelgänger, he wanted to make sure that they were aware of an important cause.

What being an advocate for Anti Bullying Pro means.

The program encourages young people to become ambassadors advocating for an anti-bullying culture within schools. According to Anti Bulling Pro, "In their role they help educate their peers on bullying, lead on anti-bullying campaigns, promote a culture which celebrates and tolerates difference and help keep their peers safe both online and offline."

Poulter's costume provided a perfect way to address bullying in front of a large audience.

Sid's character in Toy Story torments the neighborhood toys, inflicting fear on them. So when you think about it, Poulter's costume is a genius representation of everything he believes in.

And now that we're here, we might as well check out some other awesome celebrity Halloween costumes!

Any questions? No? Great! Let's dive right in.

From her No Doubt days too! And she absolutely crushed it. I'm jealous of this costume.

Gwen went as Sally from Nightmare Before Christmas. Do famous people have professional makeup artists they use because it's on point? Oh, wait, yes. Yes, they do.

Her Boyfriend, Blake Shelton, went as a scruffy Sailor.

Not going to say this costume was as lazy as mine was this year but pretty close! Next year Blake, next year.

Jessica Alba as Betty Rubble from "The Flintstones!"

Her partner in crime, who represented with the Wilma Flintstone costume, is Kelley Sawyer, the Co-President of Baby2Baby! It's a charity that a lot of LA Celebs support, including Alba!

Yes, it's Dora and Diego from Dora The Explorer! She even has a map and a backpack to go with it!

This is too cute! Stormi gets to go as a butterfly with her mom for her 1st Halloween! I'm pretty sure I went as a clown on my first Halloween. That was definitely not as cute.

Speaking of the Jenner family, Kendall Jenner went as a Fembot from the Austin Powers movies.

And she found a friend who dressed as Austin Powers. It was perfect!

And charming he is. Sorry, I got a little distracted there!

They all got dressed up (in one way or another) for a Halloween party with the kids! Isn't that what Halloween is all about?

We all know Beyonce is no stranger to dressing up.

This photo was taken during her 2017 Grammy's performance. And if you haven't seen Beyonce in concert, you should change that. It's a religious experience. So what did she dress up as for Halloween?

Beyonce as Toni (or Phoni) Braxton!

Can we get a collab please? That's something I didn't know I needed in my life until this very moment.

I'm now 90% convinced these two are reincarnations of each other or something. Their voices are too good and the resemblance is uncanny.

Also a perfect costume. Awkwafina even retweeted Munn so you know this costume is the real deal.

OMG is that Joe Jonas as Sansa Stark??

Yes, yes it is. And he's weirdly ripped. Maybe Sophie Turner should start seeing the same personal trainer as Joe so she can have 20 in biceps for season 6 of Game of Thrones.

The Game of Thrones star and boyfriend of Joe Jonas approved of the costume fully. I wonder if it's authentic.

Sophie went as an elephant!

Keen eyes might have picked her out in an earlier photo! It might not my favorite costume of the night, but who am I to judge! It looks great!

Is that Paris Hilton as a Furby doll?

Nightmares of the 2000s come back to haunt. This is a zombie on top of a zombie. Two things that should have stayed dead.

Speaking of Paris... Here's her sister dressed up as Paris Hilton at her 21st birthday party.

We can confirm, the outfit is pretty close!

Some people want to relive their 20s! I know I do, and I'm still in them.

The scariest costume of the year goes to Rita Ora as Post Malone.

I'm terrified. This is so spot-on it makes me want to run away and never come back to the internet. Rita, why?

The former One Direction front-man KILLED IT with this Elton John costume circa 1975, when Elton played Dodgers Stadium. Taron Egerton better watch out.

We went through the archives to confirm.

No offense Elton, but I think Harry might have pulled it off a bit better. You're starting to look a little raggedy, buddy.

Zoe Kravitz as a Tired Vampire

Let's wrap things up with one of my favorites. A vampire that is not a night person. If I were a vampire I would sleep in until midnight.