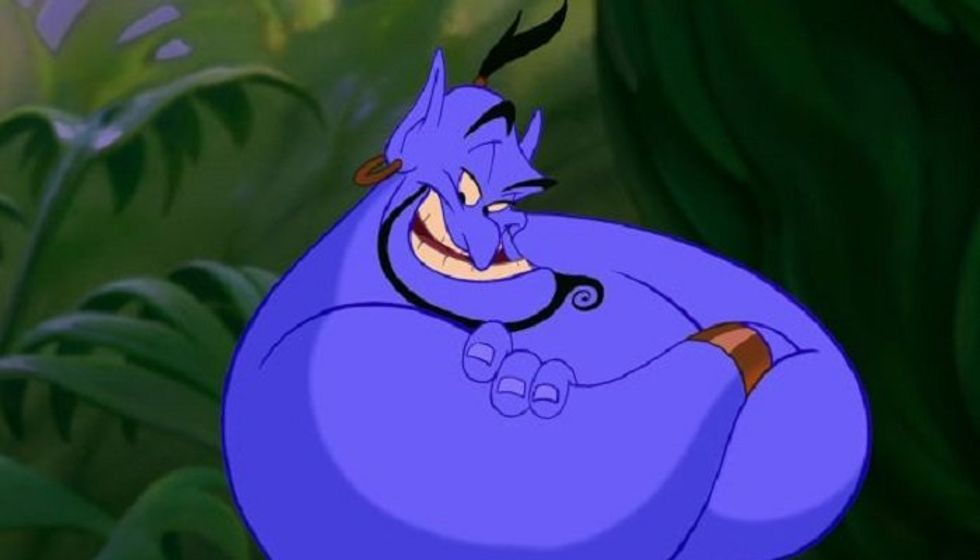 Kids of Disney's 2D-animation heyday have fond memories from Aladdin. And its characters really made the movie– we had the quick-witted Aladdin and the headstrong Jasmine leading the ensemble. On the villain's end, we had Jafar and the sassy parrot Iago, as conniving as his namesake. And who could forget the hilarious Genie of the Lamp? So it's no surprise that news of a live-action adaptation had fans excited!

However, when Entertainment Weekly offered a first look at the cast of Aladdin, fans had a couple of problems. Now, we always knew it would be hard to replicate the genius Robin Williams brought to the genie. But the problem now is, pretty obvious.

Now fans are wondering what the end result of all this will be. And while they're mostly reserving judgment for Aladdin's release, this current outcry is hilarious! Check out what the internet is saying about Disney's Aladdin.

Disney's original film is a classic.

Everyone fell in love when the animated film came out in 1992.

And, arguably, its crowning glory was the Genie.

Genie had the best one-liners.

While the sheer absurdity of his jokes never failed to make kids laugh, a lot of the Genie's humor was aimed towards adults!

He made the film fun to watch with the whole family.

If you couldn't laugh at the Genie's jokes, you probably had to get your funny bone checked.

So when Entertainment Weekly made an announcement, fans were excited.

The live-action Aladdin movie has been highly anticipated– everyone is ready to see what Agrabah looks like in three realistic dimensions!

But some of that excitement turned to shock.

Not everything is living up to our expectations!

The publication released a number of still images.

One thing is for sure, it looks like #Aladdin is going to be aesthetically pleasing https://t.co/WaujMID2gW
— philip lewis (@philip lewis)1545232628.0

People are DYING over the live-action Jafar.

Well, it's an understandable reaction.

If Genie is the most talked-about character in Aladdin, then Hot Jafar is definitely a close runner-up.

And he's single-handedly ruining the whole 'defeat Jafar' plot that the movie follows.

People have already been predicting Jasmine's arc in the movie.

And they're getting a little bit ahead of themselves on this one! The thirst is real, guys.

Someone even downgraded Aladdin to being described as "Disney Cruise-cute."

Aw, poor Aladdin. You're still the protagonist, though!

But hey, why do they have to fight?

It's going to be a stretch this time around, for sure.

ANYWAY, suffice to say that a lot of feelings are going around.

Heck, some people are stuck on the cuteness of live-action Abu!

But what about Genie? Well, here's the EW Magazine cover:

And we knew we were getting Will Smith as the Genie, which by itself is intriguing. But here's the thing: people were really expecting the blue Genie we know and love.

And the floodgates were opened.

Give the people what they want!

But when what would the other two wishes be?

Some comparisons were drawn.

Now that would be truly concerning on top of Will Smith's head.

Apparently, the hairdo alone is anxiety-inducing.

Does the phrase "hakuna matata" help at all? Wrong live-action movie? Yeah, okay.

It does have some strange proportions.

But hey, don't mock Genie's personal sense of style! He's being himself.

Someone even brought Marvel into the discussion.

That is certainly a hilarious mental image.

People wondered how the hair was staying up.

This person wondered if they'd mixed up the characters.

All in all, it was a hard no from most people.

But then Will Smith himself made a clarification!

Will Smith confirms that his genie will in fact be blue in Disney’s live-action #Aladdin film! https://t.co/TWPmyWEngO
— Talkies Network (@Talkies Network)1545240841.0

So there you have it! The first look may be a tad misleading; we will be seeing a blue Genie in the movie.

That hasn't stopped fans from using their Photoshop skills, in the meantime.

One Twitter user went ahead and fixed the EW cover for everyone!

Others are marveling at the deja vu of it all.

Now THAT'S a blast from the past.

Plus, not everyone is disappointed.

Some fans really are marveling over the other, more cool-looking pictures released from Aladdin.

So let's see what the final product looks like.

If nothing else, Aladdin is still a super fun story! Plus, now we get to laugh over all these great Genie jokes. Share this story with all the Aladdin fans you know, and see what they think of the situation!