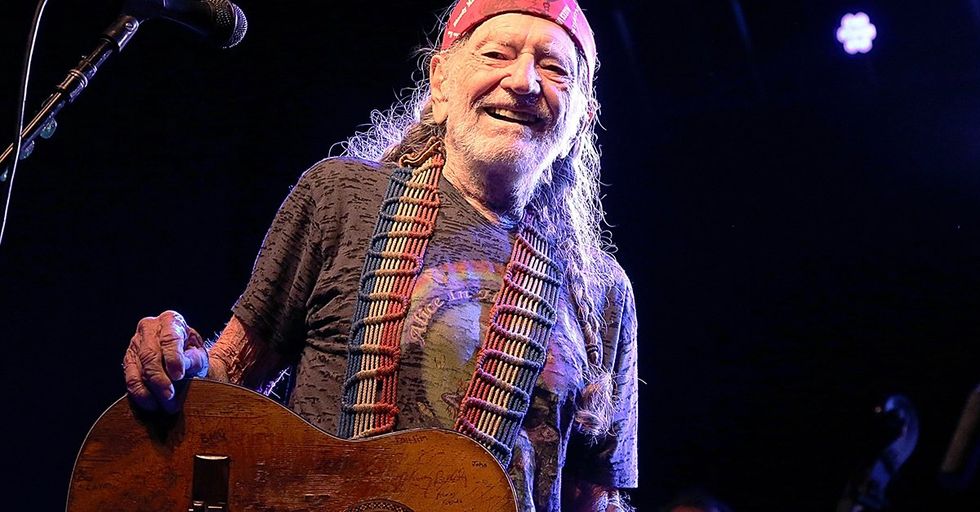 Willie Nelson Rescues 70 Horses and Keeps Them on His Ranch

There's no one singer on earth who perfectly embodies country music quite like Willie Nelson. Forget the trucks, forget the American beer (made by a German company), forget the women and the bar fights. Willie Nelson is just pure unfiltered American South in the best way.

And part of walking the walk means owning his very own farm in the middle of nowhere. Or, I guess more specifically, middle of nowhere Spicewood, Texas. By the way, if I had to come up with a fake name for a fake town in Texas, it would 100% be Spicewood. But it's a real place, I promise!

But it's not the fact that Willie Nelson owns a farm that's so important. After all, any good cowboy owns a farm. It's in the owners manual that comes with every pair of cowboy boots. It's what he keeps on that farm that's so gosh darn cool.

Willie Nelson is just an all around country boy.

Well, boy is stretching it, but you get what I mean.

He's been around for what feels like forever, and he's had kind of a crazy life.

Look at that cute lil face. There's some crazy stories in those eyes.

Like the time he almost died swimming in Hawaii when he was only 48.

Nelson was just minding his own business, swimming in the freaking Pacific Ocean when his lung fully collapsed.

I guess that's what happens when you've been a chain smoker your whole life.

Nelson took it easy on the cigarettes for a while after that but picked the habit back up a bit later.

Nelson used to smoke between two and three packs a day.

He frequently got pneumonia and decided he needed to make a change.

Can you guess which one he chose?

Yeah, he chose to quit cigarettes.

Because Willie Nelson and weed are basically synonyms.

So what's the point of the health issues backstory?

Well, they slowed Nelson down a little.

He currently resides in Hawaii, but also has a huge farm in Texas.

Talk about living the life. If I could chill any two places in the world, it would definitely be Hawaii and on a big ranch somewhere.

His farm, lovingly nicknamed "Luck, Texas," was originally built for a movie.

In fact, it was a movie adaptation of his album The Red Headed Stranger.

Nelson loved the sets so much, he left them up.

And now, on his massive ranch, he has an adorable little town built to resemble the old American Southwest.

He also has a recording studio on the lot.

This is the dream. Roll out of bed, take a stroll around your movie set, and sit down to record some old school country music, all without ever getting out of your PJs.

Well, that is, when he's not touring.

Because at the ripe young age of 87, Willie is still touring like he's a teenager ready to take on Coachella head-on.

Nelson still tours 200 days out of the year.

What? I'm pretty sure I don't do anything productive that many times a year.

But as much as he loves touring, he loves his ranch too.

Stating, "When you're here, you're in Luck, and when you're not, you're out of Luck."

Fair enough, but why spend 200 days a year out of luck, Willie?

I guess you don't need luck when you have millions of dollars and are a bonafide music legend.

I know you're saying to yourself, "get to the freaking horses."

Fair enough! You think Nelson is Lucky for getting to walk around in his PJs all day? Well, the horses are even luckier.

Nelson has over 70 horses that just roam free on his property.

That's too many horses, right? I barely have 70 friends. How could I remember that many horses?

Because if I own a horse, you better believe we're gonna be buds.

Nelson loves all of his horses though, and takes special care to make sure they're all living their best lives.

“My horses are probably the luckiest horses in the world."

Why Willie, why?! I wish someone loved me as much as Willie Nelson loves his horses.

"They get hand-fed twice a day, and they were just ready to go to slaughter is probably the last thing they remembered, so they’re happy horses."

I'm not crying, you're crying. Nelson rescues the horses right before they're about to be taken to slaughterhouses.

Hand feeding rescue horses sounds like something Mother Theresa would do.

Can you think of a more lovely way to spend an afternoon?

Also, how does one get a rescue horse?

And can it fit in my one bedroom garden apartment? Because if not, I'm gonna have to move.

Weed, horses, and music is not a bad way to live the last years of your life.

Especially on a huge ranch that's only a few miles outside of Austin, Texas.

Just down the road is some great food, awesome music, and a thriving arts scene.

Willie's got this whole life thing, and people on Twitter have noticed.

Some people have their own Willie stories.

This is so nice. I love when celebrities are down to earth. They're just like us!

True. This person really knows what they're talking about. I gave a beer to a horse once and it totally ruined my house party.

Should we be electing celebrities as President? Probably not. Would Willie Nelson be a cool af President? Definitely.

Conversely, this is bad advice.

Willie even sings a song about it. Granted, that was probably when he was a little edgier.

Also, this GIF is great, why don't more people use it?

I'm putting it in every article from now on. No one can stop me.