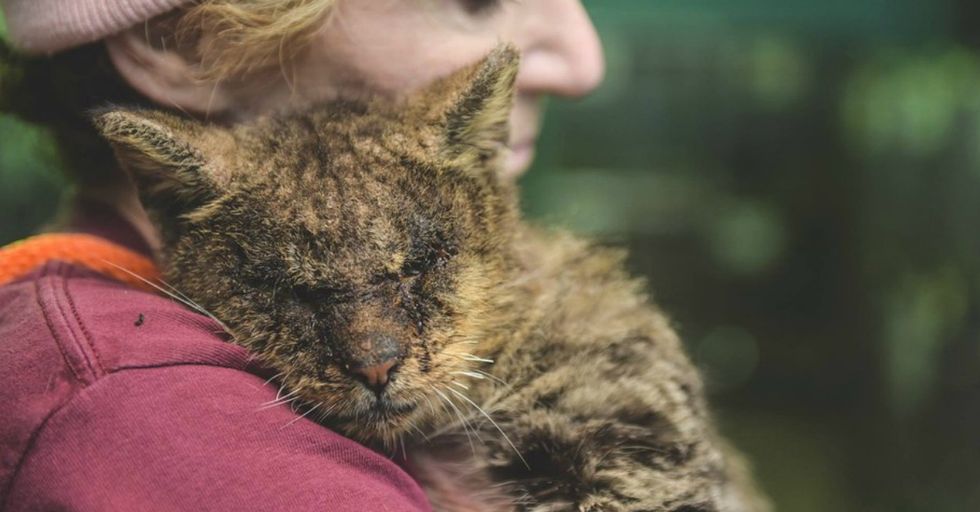 With One Little Hug...Rescuer SAVES Cat No One Would Touch's Life

No one was willing to even touch little Valentino the cat.

Until she came along...

WARNING: Some of the photos below are a bit graphic.

When rescuers found Valentino, he couldn't even open his eyes.

Valentino laid in his cage at the Baldwin Park animal shelter, suffering from sarcoptic mange. He was highly contagious to both cats and humans.

All little Valentino wanted was love, but no one was brave enough to give him any.

That is, until Elaine Seamans arrived...

"He reached out with his little paw and made the tiniest meow," Elaine told The Dodo. "It was like he was screaming without verbalizing it: 'Please help me.'"

She scooped little Valentino into her arms and up against her chest, risks be damned.

And what happened next was everything...

"When I picked him up, he put his little head on my shoulder," Seamans says. "That was it. I had to get him out."

She called up her friend, Toby Wisneski, founder of Leave No Paws Behind, and let little Valentino subtly purr into the phone. "When I was talking to Elaine on the phone and she let me hear his little meow, I said, 'That's it,'" Toby said. "I could hear him. That sealed the deal."

That weekend, Toby got Valentino over to the vet.

A key step on his road to recovery.

She said that, "everybody just adores him and they're very protective of him."

Even better still, "his prognosis is excellent and once he gets through this, he's going to have a long life ahead of him."

"He's so loving," she says. "You can tell he is very grateful. He will purr for them and try to rub up against [veterinary staff]. He knows he is safe." "His heart is good."

Thanks to one risky hug, this cat has a second chance at happiness.

Once he's well enough, precious Valentino will find a forever family all his own. Until then, you can keep following along with his recovery journey on Facebook here.