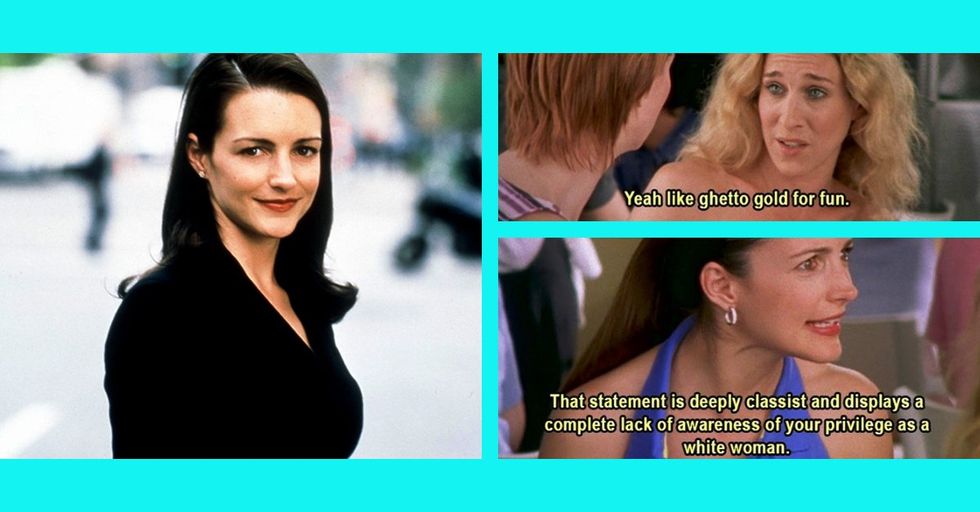 Since its inception in 1998, Sex and the City has been a classic of television – a sort of time cinematic capsule preserving the era's hopes, dreams, and ambitions. Through the four girlfriends, Carrie, Samantha, Charlotte and Miranda, Sex and the City examined the zeitgeist of the early aughts, with its emphasis on luxury, glamour, and Manolo Blahnicks.

It also, unfortunately, preserved the most problematic aspects of the era. As noted by many a pop culture observer, Sex and the City was rife with classism, racism, homophobia and transphobia.
The SATC girlfriends, while ostensibly openminded and accepting New Yorkers, were also prone to the worst gaffes that only a bunch of rich white women with disposable incomes could make.
Take, for instance, that time Carrie, a sex columnist, called bisexuality a "layover to gaytown." Problematic, right?
How about the curious lack of people of color on the show? Yes, there were a few people of color, but they were more caricatures – sketches – than they were actual characters.

Did they lock 99.7% of all the black people out of New York City while filming Sex and the City? Banish them to the Bronx? Brooklyn? 🤔
— ravenwilkinson (@ravenwilkinson)1510759432.0

As Hunter Harris explains in an article for Refinery 29,

[SATC] was a show that was simultaneously progressive and regressive, where people of color were either stereotypes or punchlines. Even when Samantha or Miranda — never Carrie or Charlotte — shared their bed with a Black or Latino suitor the lead characters’ empathy or curiosity never expanded beyond stereotypical observations whispered amongst their narrow, white social circles. New York was the main character on a show that featured only one type of New Yorker.

Of all the girlfriends on Sex and the City, no character so typified this as Charlotte York. Charlotte, a sweet, WASPY idealist, existed in a New York only a rarefied few see. It was white, privileged, and upperclass, and Charlotte, in her pursuit to become the perfect wife and mother, never questioned this.
Enter the ladies @everyoutfitonsatc, an Instagram page that curates all the outfits ever worn on the show. Writer and director Lauren Garroni and designer Chelsea Fairless, both Los Angeles residents, wanted to examine the problematic social approach of the show.
As Fairless said to Nylon:

Since we started this account, we’ve been trying to think of clever ways to address the problematic dialog in the series. But when we write ‘that’s racist’ in response to something, it may be true, but it’s not exactly comedy gold. So we thought that it would be much funnier if our viewpoints came from Charlotte instead. It’s unexpected, and our audience is desperate for it.

Even though Charlotte is not actually ‘woke,’ she’s so passionate about her beliefs that it’s easy to imagine her as a social justice warrior. If she took all of the energy that she put into her marriage with Trey and channeled it into a more worthwhile cause, she could save the world."

The meme has caught on across social media. Fairchild states that "people have not only been reposting it but posting our #WokeCharlotte memes as their own. Which, in meme culture, is the highest form of flattery."
But there was one form of flattery neither of the women could ever have expected. Kristin Davis, the actress that played Charlotte is a fan of the meme. "Last week she wrote, ‘I love #WokeCharlotte more than life itself," Garroni said.
In the end, both Fairchild and Garroni are happy with their creation. "It just started out as an inside joke between Chelsea and I," Garroni said. "We never anticipated it would gain so much traction, but we’re so happy with the response."