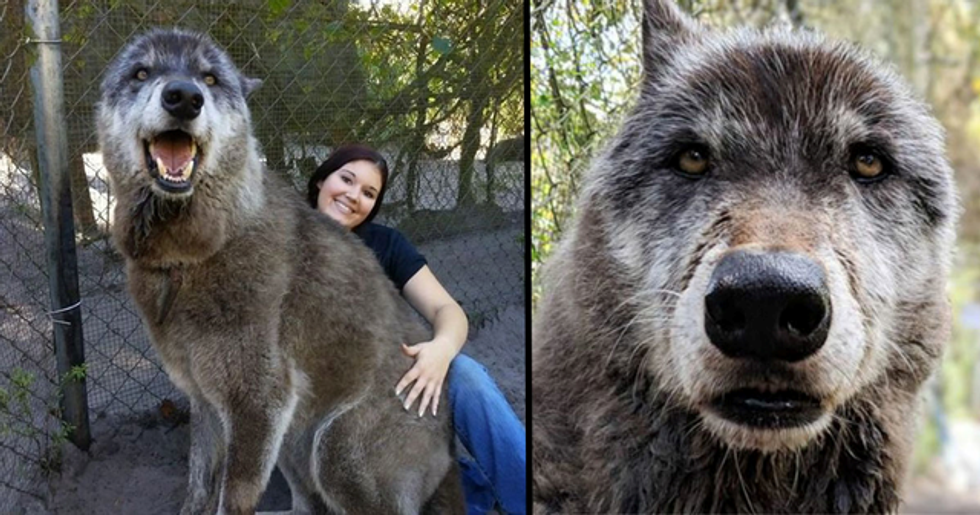 Gray wolves are native to Eurasia and North America. It is estimated that there are around 300,000 wolves in the wild. Although people often fear attacks by them, they usually stay away from humans.

However, when they mix with domestic dogs, people often think that they can have one as a pet. That's where they are wrong. Very wrong. Luckily there are some helpful volunteers who are there to care for the animals in a way that most of us can't.

If it ever feels like all your friends have a dog or a cat, there's a reason for that.

44% of all US households have a dog, and 35% have a cat. This means there's an estimated 78 million pet dogs and 86 million pet cats. That is a lot of animals to try and keep in check. It's no wonder that some go wandering off, or have owners that struggle with them.

Have you ever heard of creatures being taken to an animal shelter?

It sounds like the right place to take strays, and the people who work there do their best to save the animals. But they can receive a lot of different animals in a short period of time, and they usually don't have much funding.

The hope is that the owners come and find it.

Stray pets that are brought in are usually looked after for a week or so, in the hopes that someone contacts them. The next step is usually to see if anyone will adopt them.

Often there's not much that can be done to help the animals.

When the animals are sick, it is often the policy of the shelter to euthanize them. Unfortunately this can often be the course of action for healthy animals too who aren't claimed quickly enough.

A survey was carried out on thirty European countries. Sadly, only four countries (Czech Republic, Germany, Greece, and Italy) don’t permit the killing of healthy, stray dogs. It is not that all the other countries want to do it. But without funding it can be tricky to support so many stray dogs.

In America the numbers aren't pretty.

Each state has slightly different laws, and each shelter has its own system, but sadly a high number of euthanasia has to take place. It is thought that around 1.5 million animals are euthanized in animal shelters each year. This is 670,000 dogs and 860,000 cats every year.

One pet looked like this was sure to be his fate.

In 2008, while the rest of the world was struggling with the financial crisis, one creature had his own plight. Yuki was eight months old and living in North Carolina. He was purchased from a man who had just finished boot camp. But life wasn't going to be plain sailing for Yuki.

Yuki was larger than anticipated.

The owner of Yuki had his own struggles and decided that he couldn't handle such a large dog (he currently weighs around 120lbs). The next day Shy Wolf Sanctuary received a call from a shelter saying that they believed that a wolfdog had been brought in as a stray.

Have you ever heard of a wolf dog?

Wolfdogs are almost exactly what they sound like. They are the creation when people decide to try to breed wolves with domestic dogs. Usually they are mostly dogs, with a hint of wolf, but Yuki was a bit different.

Each wolf dog is a unique breed.

Every wolf dog is different and has a different background. It is one of the reasons why they are usually not permitted to be domestic pets. They are less predictable than regular wolves or dogs. They have different strains of each and this can lead to them being more aggressive in certain situations.

Wolves have always been a part of stories and folklore. This is probably because they have been around as long as humans. They have been extinct in the UK since the nineteenth century. While in America they are rare, and close to extinction, but still around.

Their ethereal howls and pack dynamic make wolves very interesting creatures. But they have become increasingly popular following modern pop-culture. Wolves star in The Jungle Book as the caring animal family that take Mowgli into their pack.

Does anyone remember a small franchise called Twilight?

Twilight, or more accurately New Moon, brought the idea of werewolves back into the popular conscious. It didn't hurt that their spokesperson was teen-heartthrob Taylor Lautner, who spent an uncommonly large amount of time without his shirt on.

Although there was one man who may have made wolf packs even more popular.

It was in The Hangover that Zach Galifianakis began explaining his theory that he had been a lone wolf. The beauty of the moment is in his idea that they could all be lone wolves together in a pack.

The reality of wolves is a little different.

Fun fact Friday! An animal who is downwind of a wolf can be tracked by its scent. In good weather conditions, a wol… https://t.co/AV9jsCf4WV
— Shy Wolf Sanctuary (@Shy Wolf Sanctuary)1550835335.0

Wolves are not often seen by humans. They are quick, strong and have powerful noses that can usually smell out a human long before contact. In general wolves are quite shy of humans and would not naturally be aggressive towards humans.

Yuki is more wolf than dog.

When Yuki was picked up from the kill shelter and taken back to Shy Wolf Sanctuary, they did a DNA test on him. It revealed that he is actually 87.5% grey wolf, 8.6% Siberian husky and just 3.9% German shepherd. No wonder he's so big.

There were high hopes for Yuki at the beginning.

A lot of animals that are rescued tend to be in a difficult place in their lives. They have often been treated badly or have wounds and injuries. But Yuki was different. He was so friendly and healthy that there were high hopes that he could be an ambassador wolf dog for the sanctuary.

An injury caused some issues for Yuki.

After injuring his leg, Yuki underwent five different surgeries. As a result he had to spend a lot of time in solitary enclosures and developed cage aggression. Being part-wolf, part-dog means that this is more likely to happen than for pure breeds.

He's a fan of the ladies.

Luckily the sanctuary hasn't given up on Yuki. There are several volunteers that work there and Yuki seems to particularly enjoy women's company. There are a few women who Yuki will allow into his space. This is called his 'harem.' It is an honour to be a part of it, although he may retract membership at any moment.

What is the Shy Wolf Sanctuary?

The Shy Wolf Sanctuary, Education and Experience Center is based in Naples, Florida. They describe the center as a place that: 'provides sanctuary and rehabilitation to wild and captive bred wolves, and other exotic animals.' They also work to 'educate the public about the importance of protecting these animals.'

Despite the name, the Shy Wolf Sanctuary isn't just for wolves.

Although the primary focus of the sanctuary is to protect wolfdogs, they also take in other exotic animals that need a home. Part of the sanctuary's mission is to educate people so that they realise the dangers and commitments required when adopting an exotic animal. Often they aren’t legal for a reason.

There are some very exotic permanent residents at the sanctuary.

There is a bobcat called Bob Leo (very imaginative), as well as a cougar named Cimarron. There is also a fennec fox, which comes from North Africa, called Fenn, as well as a regular red fox named Sophia.

Then there are some not so exotic residents.

Their resident animals include three racoons named Andy, Mikey, and Rocket, as well as the skunks, Mork and Mindy. Then they also have a couple of prairies dogs and tortoises there too.

They rescue more than they can take care of.

The Sanctuary has space for around 60 animals in total, but they rescue between 20-100 new wolfdogs every year. And that's not just in Florida. They rescue dogs from across the country too. Their aim is to place the wolfdogs in foster homes for eventual adoption.

The focus of the sanctuary is the care of wolfdogs.

Wolfdogs need particular care. They are all different, and they are all the result of human interference. The sanctuary is currently home to fifty wolfdogs, although they keep finding more.

Pets are for life, not just for Christmas.

Taking on a new pet is a huge commitment. It shouldn't be done lightly, or just on a whim because someone might like a young puppy for a month or two. People that get pets should understand that medical bills are an unavoidable part of having a pet. It is important to take care of them so that they can live full lives.

One of the main aims of this sanctuary is to educate people.

Wild animals are exactly that; wild. They are not meant to live their lives in captivity. Even if they are bred with domestic animals, like wolfdogs, they will never fully adjust to a life like that. Equally, that does not mean that they should be hunted or eradicated. The circle of life and successful ecosystems rely on each animal and creature living in harmony, and usually without human interference is best.

As you can probably imagine, taking care of nearly seventy animals, many of which are literally the size of wolves, takes a lot of effort. It requires 61,000 volunteer hours every year. Meanwhile the animals eat 52,000 pounds of meat each year. And that doesn’t take into account other costs such as veterinary requirements, dental problems, cleaning them amongst countless other parts of their life.

Sanctuaries and shelters are essential.

In a world of neglect and ignorance, our societies cannot function without sanctuaries and shelters such as these. Without them there would be feral animals and strays roaming the country without anyone to keep them in check. Places like this are usually severely underfunded and rely heavily on donations.

What's the lesson of the story?

Wolfdogs are wolf, as in part wild animal. If you hear of anyone with a wolfdog, make sure that they are fully prepared for what they have taken on, or suggest that they look into sanctuaries. It's lucky we've got places like the Shy Wolf Sanctuary, so that they can provide animals with a decent life, rather than euthanasia.