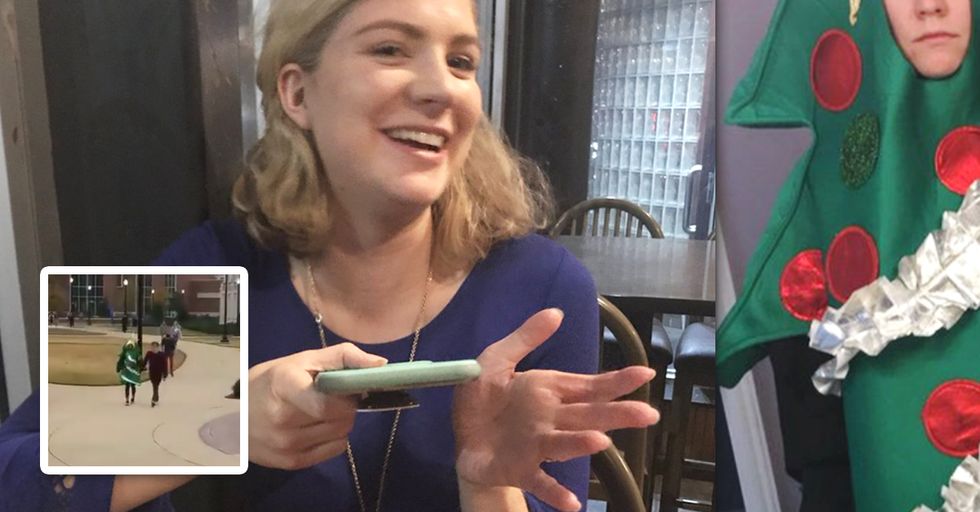 It's the most wonderful time of the year! The holiday lights are sparkling, the jolliest tunes are filling the radio waves, and Amazon wish lists are growing longer by the minute.

This year, there's a new way to get into the holiday spirit: dressing up like a Christmas tree!

All the cool kids are doing it! Well, the woman in today's story is doing it, and she seems pretty cool. It all went down when she made a promise to the Internet, and the Internet made sure she delivered.

This is Kelsey Hall. (There in the Christmas Tree costume.)

She's a 20-year-old student at the University of Alabama. Earlier this week, Kelsey promised the Internet that she'd wear the above Christmas tree costume if her tweet got 1,000 retweets. (She must've missed last week's story on a Twitter challenge gone awry.)

As she should have expected, Kelsey's tweet pretty quickly began picking up steam.

That's how the Internet rolls. Give it a challenge — especially one that can be achieved from the comfort of one's own home —and it rises to the occasion with ease.

People were obsessed with the number of retweets Kelsey was getting.

How could you not be? When the universe hands you the opportunity of a lifetime, you reach out and grab that thing.

Kelsey, on the other hand, was not super thrilled about her tweet's virality.

After all, she was the one who got stuck with the possibility of having to wear the same costume every day for a few weeks.

And then? It happened!

Of course it did. You knew that was coming. But did Kelsey follow through on her promise? Read on to find out!

She did! Here's a video of Kelsey in the Christmas tree costume:

Look at it. It's glorious. It's even better than we imagined it would be. It's one thing to see a picture taken within someone's own home (or dorm room or whatever), but something else entirely to see a Christmas-tree-shaped human walking around campus.

She became something of a local celebrity:

Move over, Santa! People want their pictures taken with Christmas-tree-costume-clad people now. Santa is old news. All we care about now is Christmas tree costumes.

Mostly, people are loving Kelsey's attitude through this whole thing.

She made a promise and she stuck to it. It's quite honorable, really.

But that hasn't stopped her from regretting her decisions.

Someday, the tale of Kelsey the Christmas Tree Costume Girl will be a holiday tale told all 'round the world. There's probably a lesson in it somewhere, right?

She was especiallyregretful on Day 2 of the social experiment when it started raining:

On the one hand, there are few things sadder than someone being stuck in a soggy costume as a result of their own social media hubris. On the other hand, we're still laughing.