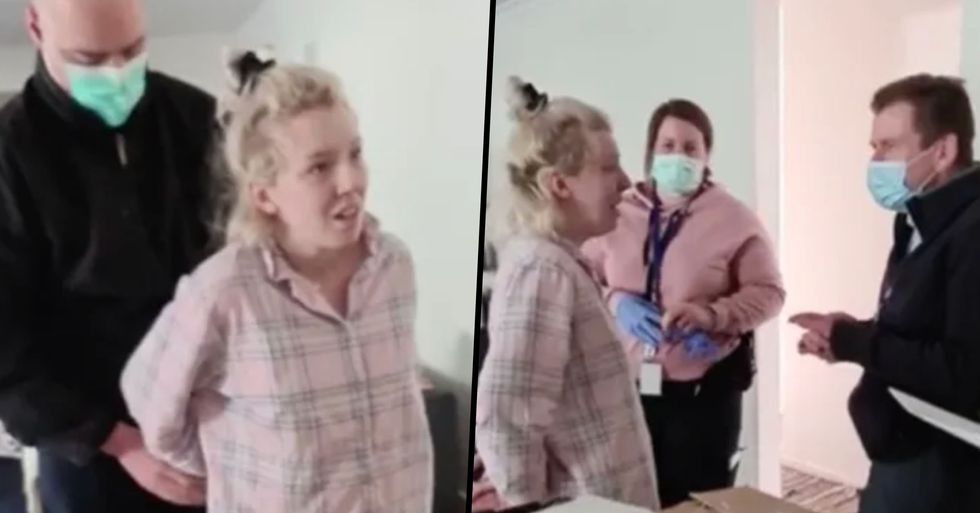 Is this a step too far? Keep on reading to see her shocking arrest video...

Believe it or not, there are actually people out there believing that the global lockdown is totally unnecessary.

So many are refusing to believe the words of medical professionals and government officials and instead, are taking matters into their own hands.

People feel that wearing facemasks and self-isolating is totally uncalled for...

And that this whole global pandemic is just one big hoax. Okay, then.

This is extremely worrying...

When will people start taking this pandemic seriously?

Well, it seems that they never will with influential figures still around to brainwash them and feed them incorrect claims.

But over in Australia...

Authorities aren't taking any nonsense when it comes to those promoting anti-lockdown protests and ideologies.

Earlier today, a woman in Victoria was arrested...

The state of Victoria is currently experiencing a second strict lockdown due to a spike in COVID cases...

And when twenty-eight-year-old Zoe Lee shared a Facebook post advertising an anti-lockdown protest, authorities did not take her actions lightly.

Zoe's partner filmed the ordeal when police officers arrived at their home.

The video was live-streamed to Facebook and it shows officers arresting a baffled Zoe, who is heard asking what she's supposedly done. "It’s in relation to a Facebook post, in relation to a lockdown protest you put on just that day," detective Adrian Smith told the woman as she was handcuffed in her home.

The woman looks utterly shocked, to say the least.

"But I wasn't breaking any laws doing that," she protested, before explaining that she was pregnant and was due to attend an ultrasound appointment that very day.

But the detective couldn't care less.

"You are actually. You are breaking the law," he responded. "That’s why I’m arresting you."

But the detective insists that she needs to be arrested because she "already committed the offense." Wow.

Zoe begins to get distressed and she notes to the officers that her 2 small children are watching their mom get arrested.

"The search warrant entitles us—and we’re required to—seize any computers, any mobile devices you have," Detective Smith says over her sobs, seemingly unbothered that Zoe is starting to freak out.

After being taken into custody, Zoe was later released on bail and is due to appear in court in January... meaning Australia is deadly serious about this lockdown.

A statement issued by the Victoria Police Department read: "Those still thinking of attending the protest […] can expect a swift and firm response from police. We will have no hesitation in issuing $1,652 fines to anyone who is breaching the restrictions on the day, or making arrests if necessary."

Many people feel that this is what she had coming to her and that lockdowns anywhere in the world should be taken seriously.

Many felt Zoe's arrest was totally unnecessary and was actually a waste of police time.

You can watch the controversial video here:

What do you think? Do you feel that Zoe deserved to be arrested for sharing a Facebook post promoting an anti-lockdown protest? For more on the subject, keep on reading...