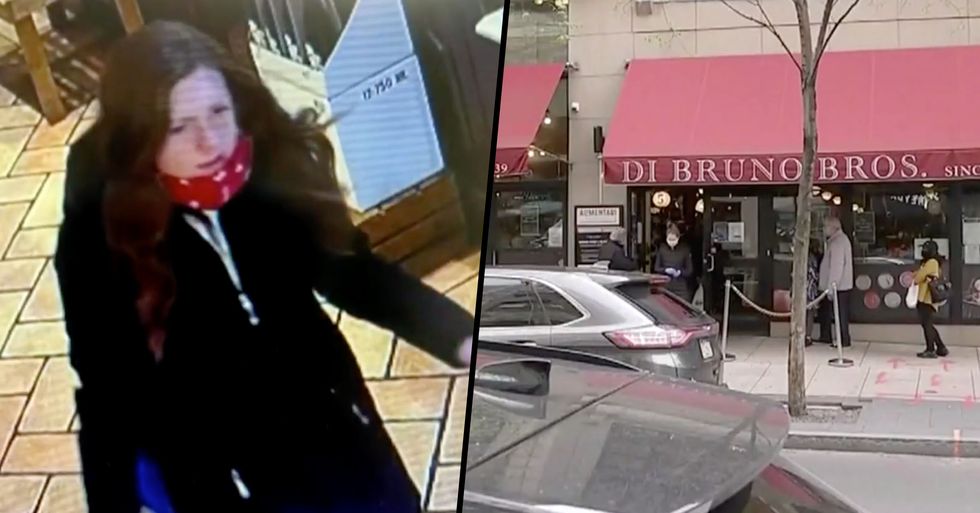 Welcome to 2020, a place where human decency has gone out the window and the only thing that matters is how much toilet paper you can carry. Since news started to circulate about the virus, people have lost their minds trying to stock up at supermarkets and grocery stores, shelves are empty, fights have broken out, and workers are just so tired.

We're sharing the highlights of the games with you here today including the story of one woman who literally spat at another after bumping into her at the grocery store...

You'd think it wouldn't be that common for people to get into physical altercations over TP... right?

But you would be wrong because there's going to be a LOT of toilet paper fights in this list. People love to wipe their butts.

It's gotten so wild that some places have had to institute security.

No seriously. Those are actual cops guarding actual toilet paper. That is how bonkers the world has gone.

If anyone comes after me like this I'm dropping the TP and running.

I do not want to hear this scream ever again. People have gone bananas.

In some places it's starting before people even get into the store.

Zombie apocalypse outside Tesco today #coronavirusuk #panicshopping should be ashamed of yourselves https://t.co/60TGvw3uM1
— Rhonda (@Rhonda)1584264770.0

People are lining up outside stores before open, trying to get in and snag some precious paper products. Was this what we imagined the Apocalypse would look like?

People don't seem to have any thought for the impact they're making.

Have we all turned into apes? Do we not know how to take things off of shelves without spilling everywhere? Were we not raised by mothers who said "clean up after yourselves,"?

It's not just toilet paper either.

This gentleman has decided he needs enough bread to fuel a small army. Of course 90% of it is going to go bad before he can eat it, but that's not what's important. What's important is that he's surrounded by carbs.

Some people aren't satisfied with hoarding one thing.

This is all mine and no one else can have any of it. No I will not use all of it. You still cannot have it.

And if you think that's not scary enough...

Not all the panic buying is happening in supermarkets. This line is for a gun store. Yeah...people are afraid they'll have to fight for access to food and TP.

Apparently people aren't afraid to use those guns.

Sure it's wild when people get into fights at the grocery, but it's downright terrifying that we've already reached the stage of people committing armed robbery to get toilet paper.

If you need a trolley built for furniture to load your toilet paper...

If you have moderate to severe #CoronaVirusPanic, ask you doctor if #ToiletPaper might be right for you. https://t.co/VE1CpTgReG
— Trivial Daydream™ (@Trivial Daydream™)1584368942.0

You may not be thinking in your right mind. Seriously. Stop and put it back.

Of course all of us know that being close to other people can be dangerous right now.

Which is why dressing like a Marvel superhero undercover is the only solution. This will clearly keep you safe! Hoodies are medically approved. They're not. Stay 6 feet away from people.

How are there this many people who are so stupid?

Do they truly have no idea how much toilet paper they go through on a regular basis? Or maybe they're just preparing for their quarantine diets of frozen pizzas.

At least these folks aren't fighting...yet.

Honestly, I'd rather starve to death than wait in line that long. This is putting Disneyworld to shame.

Even when things stay calm and collected it still looks so weird.

Panic buying and stockpiling of toilet roll continues. These are the scenes at Costco in Farnborough in Hampshire t… https://t.co/T0Xsyd8p1L
— Adam Clark (@Adam Clark)1583589396.0

Imagine this happening in the paper products aisle and emptiness in the produce section. Calm down everyone.

But how do you expect this to pan out? You never get off the rice, she never stops grabbing the rice? It's a rice standoff.

On the other hand, these folks are definitely getting a workout.

I don't even think I could lift two of these bags at once, so kudos to this fear-powered strength.

Some groceries have found ways to make things a bit lighter.

You can only have two rolls of toilet paper, but you do get a complimentary mariachi band. I'm not sure if that's the music I would have chosen as "soothing" but it's still delightful.

Some store employees have gotten a little bit weird too.

They have to deal with the madness somehow, and, much like the Titanic, they will go down with the ship.

"No rice, no paper towels, no toilet paper!"

So at this point, we're competing with other people for rice while forced to stand outside in the elements for hours on end? Since when did life turn into one giant game of Survivor?

If all of these images leave you stressed to go shopping...

The only solution is to fight it out. That's what everyone else appears to be doing.

But this one woman recently took things to a whole other level of disgusting.

While Alexis Danilo was shopping for groceries in Philadelphia, a fellow shopper bumped into her but rather than just saying "sorry" and moving on with her life, things took a rather nasty turn.

As Alexis moved away, the other woman became enraged.

“I don’t have the disease," she said, continuing to disrespect the social distancing rules in place.

“That’s rude, there’s a pandemic going on," Alexis said, hoping she would just leave her alone.

However, she was far from finished. She proceeded to threaten Alexis while trying to physically fight her.

Not only that, but she also spat at her!

Removing the mask from her face, the psychotic woman spat in Alexis' face before security was called and she was arrested. Disgusting.

And just to make matters worse...

This woman had previously been involved in a similar incident but had spat at an employee. Thankfully, she was taken away. This pandemic has truly brought out the worst in people. For more news on how the nation's leaders are trying to handle this virus, keep scrolling...