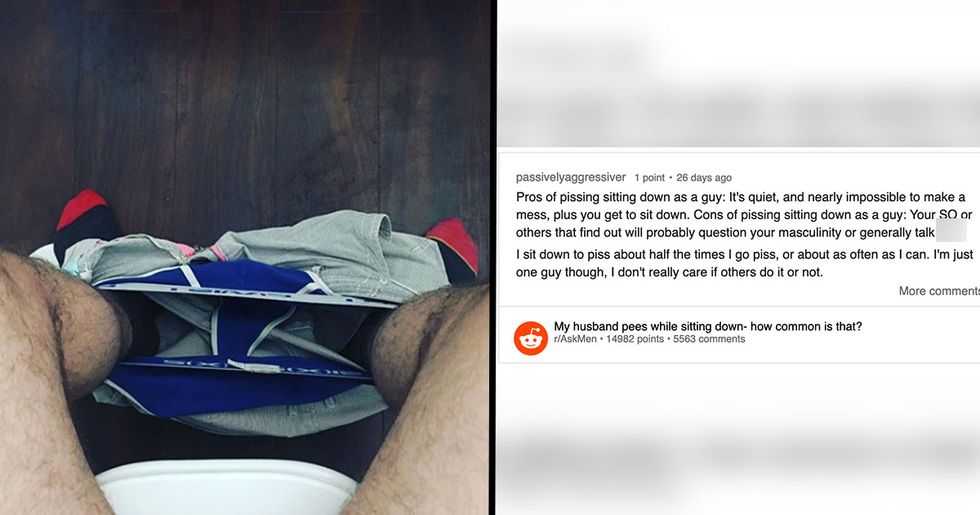 Although it can be said that we now live in a society where the gender divide is being blurred more and more with every day, there is still some clear divisions between people who identify as cis-gendered. For example, women will spend many hours in the shower, shaving away leg and armpit hair, while men often won’t worry about such things. Women have to take into account a lot of variables when buying underwear, whereas men can just go into a shop, pick up a 4-pack and head home. And then of course there is the divide which comes with toilet etiquette. Something that a woman recently discovered isn’t all that black and white, leading her to turn to Reddit for some…interesting answers.

What are the rules of toilet etiquette?

Being raised in a society still heavily separated into gender stereotypes, many of us have grown up believing two things.

That women sit down to pee.

I’m not going to sugar coat this, because there is no point. But many of us will probably agree that women sit down when they urinate.

While men stand up.

Being born with more flexible bits, men are often expected to stand when they urinate, having to aim it precisely into the toilet bowl.

Well, maybe not, because there are no actual laws or rules saying that this must be the case!

Recently, a happily married woman discovered that her husband often sits down to pee.

And there could be many reasons for this.

Maybe it’s just his preference, maybe he’s lazy and can’t be bothered to aim, maybe it’s easier to do in the dark – who knows?

But it definitely isn’t strange.

However this confused wife had never heard of such a thing and decided to ask the world for some answers.

Deciding that she needed more information, she went to that modern-day beacon of knowledge – Reddit – where she asked the simple question.

How common is that?

And this simple question got some very… un-simple answers.

And the results are hilarious!

Just check out some of these wondrous gems for yourself. You won’t be disappointed.

One user had this solution.

This lovely person had this theory about the husband’s toilet habits. Let’s just say it’s a very colourful answer.

Some found 'The Fork' very relatable.

I mean, we've all experienced this haven't we guys?

Many blamed sex for needing a sit-down pee.

Again another valid reason why a man may not chose to stand up for a change.

Some found sitting down to be the less messy option.

As a man, splash back can be a nightmare when relieving yourself. So sitting down can definitely reduce this.

This also proved to be a popular reason!

Many users agreed that sitting down reduces the amount of urine falling on the floor or toilet rim. Preferring sitting down for it's cleanliness and ease.

In fact, many men prefer a clean bathroom.

Who would have thought it? Turns out men want a clean bathroom as well.

Others found sitting down just easier.

Maybe not the most significant or interesting of reasons, but sometimes sitting down is easier than trying to aim.

Needing a pee in the night can be hazardous.

So sometimes sitting down just turns out to be the easier and safer option.

In some cases sitting down saved marriages.

If you miss the bowl and end up peeing all over the rim, you can bet that your wife, friend or partner will not be happy having to sit in your urine.

Again, some men just can't be bothered to stand and aim. And who doesn't like sitting down?

Some found the topic an interesting study of gender norms.

This particular user addressed that sitting down to pee can often lead to people questioning your masculinity. A very topical conversation in my opinion.

Turns out (ahem) size can also be an issue.

Something I bet no one thought of, turns out penis size can also affect the way you pee. Fun fact for the day!

I bet many men and women now use their phones on the toilet, just to pass the time. Maybe it's not the cleanest habit, but it makes sense.

Maybe fashion is a reason.

Sometimes standing up can result in your clothes getting some splash back. This man find sitting down so much easier on his shorts.

And the ratio is startling.

In this particular instance, an office of 20 men resulted in 12 of them sitting down. Is this a blooming trend?

Turns out it can also be better for your health.

Of course we cannot actually confirm this, but if it's a reason, it makes sense.

Some even made it into an event.

This guy is not only awesome, but also a genius. Who would have thought of that?

This even led to more toilet topics.

I guess it's easier and better than just shaking and going.

And my personal favourite!

So, are you a sitter or a stander?

Because at the end of the day it doesn't matter. It's your experience and your life - do whatever you want!