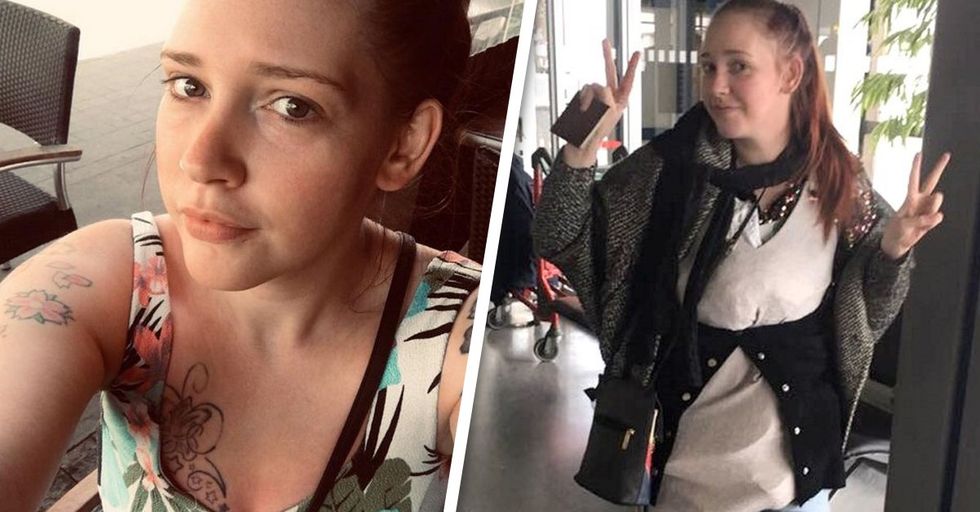 We're always on the lookout for money-saving travel tips. So technically this counts as a tip — it's just a bizarre one!

Now, you might be used to the standard travel dos and don'ts. Book your flight in advance, shop around for the best price, and all that good stuff. But Natalie Wynn, a British traveler, recently pulled off something a little more unconventional. The best part? Despite her unorthodox methods, it totally paid off. So if you're packing for a vacation and can't seem to keep your suitcase under the weight limit...well, I guess Natalie's way might actually work!

Check out how she avoided those pesky luggage fees. Even the airline applauded her for it!

Packing a suitcase: we've all been there.

And our eyes (and fashion sense) being bigger than the suitcase is a pretty common problem to have!

Most airlines have weight limits.

Which totally makes sense. But it means we've got to make sure our suitcases don't weigh too much before we leave for the airport...or we have to improvise.

Which is what Natalie Wynn did!

Wynn, 30, was heading off for a vacation in Fuerteventura in the Canary Islands from Manchester U.K.

But she was stopped.

While boarding her Thomas Cook flight, security weighed Wynn's suitcase and found it to be too heavy, at 9.4kg (roughly 20 lbs).

And this was over Thomas Cook's limit.

The airline's maximum weight for suitcases is set at 6kg (about 13 lbs). So Wynn was told hers couldn't be taken into the cabin as it was.

Or she could pay a fee for the overweight bag.

"It was nearly 4kg over, but they wanted to charge us £65 each just to get it on the plane," she told The Sun. For reference, that's about $85 USD!

So her reticence to pay that is understandable.

"Because I had booked an all-inclusive holiday so was getting all my food and drink, I didn't plan on bringing much money with me," she said. "I think I only had about £60 in my account just to bring with me on holiday."

But she obviously didn't want to leave her things behind.

How awful would that be, leaving half of your things behind at an airport? Clearly, that wasn't an option either!

So Natalie came up with a third solution.

"I didn't want to be using the little amount I had just so I could get my bag on the plane," she reasoned. "I literally said, 'I'm not paying it', and started putting my clothes on."

via: Kennedy News and Media

"I put on four dresses, two pairs of shorts, I tied a dress around my neck, put a skirt on, I shoved two dresses down the dresses I had on, and two pairs of shoes as well, and a cardigan," she told The Sun.

Now, it can't have been very comfortable.

"I was boiling, absolutely boiling," Natalie said, recounting her trek onto the plane after 'dressing up.' "I still had plenty in my case but I put near enough half of what I've put on."

But she made it!

"It definitely worked. Normally I check the weight of the baggage but I did the online check in for me and my friend, but we got to the counter and they just stopped me," Natalie added.

Other people offered to help.

Wynn also reported that other good samaritans boarding the flight offered to stow her clothes in their suitcases, but Thomas Cook said they couldn't do that.

Wynn and her traveling buddy had quite the supportive audience.

"There were people around us cheering us on because after I did it my friend decided she would do it too because her baggage was also overweight. We were definitely a sight walking on to the plane," she said.

Well, okay, there was one sour face in the crowd.

"The only person that didn't look happy about it was the woman at the security boarding desk," Natalie said. "I was still allowed to get on the plane."

Well, as long as it worked in the end!

The only problem was the heat. Natalie was getting so overheated that she had to ask the flight attendants if she was allowed to take all the excess clothes off once she boarded.

Thankfully, it was a 'yes.'

"I felt like I was going to pass out because it was so warm," Natalie said. "As soon as I got on the plane, I took it all off and put it back in my case."

That in itself was also pretty funny!

"That was funny as well because people were laughing because I'd just started taking off all my clothes in the middle of the plane."

Wanna know what the loophole was?

According to Thomas Cook guidelines, adults are allowed to bring one piece of hand baggage weighing up to 6kg onto the flight for free. And Natalie's clothes weighed less than that!

It all turned out pretty well for Natalie.

She worried how people would take her actions.

"I was worried I would get a negative reaction to it - people saying it was my own fault but not one person said anything even at the airport. It set up a good start to the holiday anyway," she said.

Yeah, I think we can all agree it was just funny...and kind of genius.

Even Thomas Cook thinks so! "Natalie’s ingenuity here is noted!" said a spokesperson for the airline. "The good news for Natalie and the rest of our customers is that later this month we are increasing our hand baggage allowance to 8kg."

"This will hopefully help her travel a little less like Joey from Friends next time…" the spokesperson added.

Does that mean we can call this travel technique 'The Tribbiani'?

It may as well be a 'technique,' because Natalie and her friend certainly aren't the first people to try it out!

Why stop at half your clothing?

Matt Botten of Cardiff went ahead and just wore all of his for a flight to Reykjavik!

Once again, it was done to avoid a fee.

So he decided not to pay EasyJet's fee.

Matt instead emptied his bag right there on the spot! He put on all of his clothes on, including extra t-shirts, sweaters, and pants. He even found room for his sneakers in jacket pockets!

A triumphant Botten posted this on his Facebook page:

We’re going to Iceland baby! And how to do it in a financially frugal manner, without having to stump up forty-five bloody quid for a hold bag? Simply by wearing EVERYTHING I OWN. -Matt Botten

Because, as Natalie said, it is strenuous.

In fact, boyband singer James McElvar collapsed from heat exhaustion after trying to do the same thing on a flight to Glasgow.

One man also claimed to have airline problems.

According to a British Airways passenger, he was kicked off his flight from Iceland to England--and arrested--for wearing too many clothes.

Ryan Hawaii (the man's Twitter handle) tried to get around airport fees at Iceland's Keflavik Airport by wearing eight pairs of pants and ten shirts onto the plane.

Ryan was stopped by security.

And the conflict escalated into an all-out argument, which Ryan filmed and put on Twitter. "Being held at Iceland Keflavik airport because I had no baggage put all the clothes on and they still won't let me on. Racial profiling?" he wrote.

After that, he actually had to give a report to the police.

After which they let him catch another flight home booked over easyJet. But when this other airline found out about the previous ordeal, they banned him from the flight too! Eventually, Ryan got a flight home from another airline.

Let these stories be a lesson.

The next time you're slapped with an overweight bag or extra luggage fee, you've got a last resort plan in your back pocket. Just remember to be careful with it! Want to travel the world? Keep reading for tips on how to see the world without destroying your savings account!