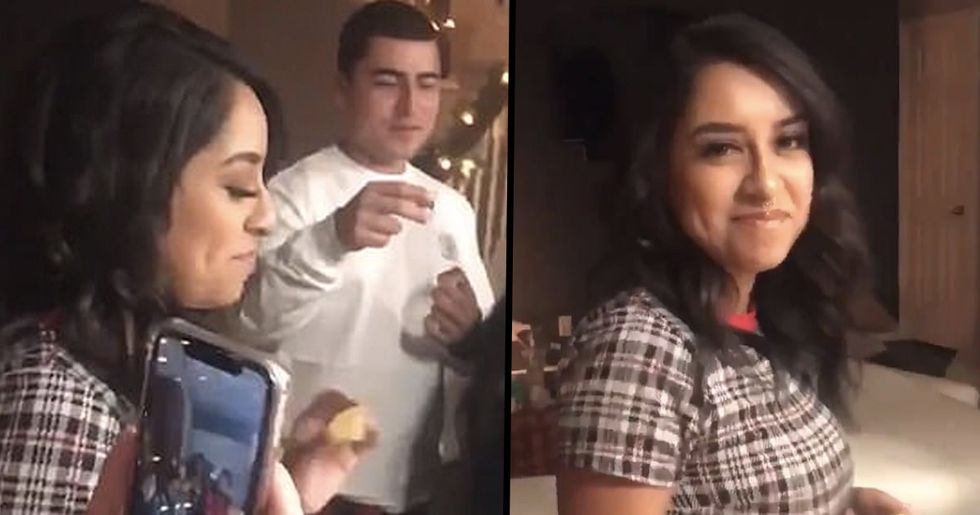 Woman Breaks up With Cheating Boyfriend During Birthday Speech

Traditionally, a 21st birthday is a rite of passage spent partying hard with friends, legally entering bars, and probably have a drink or four. Young adults eagerly await the day they’ll get to celebrate these privileges of adulthood, and things can tend to get a little bit wild the first time a freshly minted 21 year old is let loose on the world.

When Tiana Perea found out her boyfriend was cheating on her, she decided to take her wild 21st birthday to a whole new level by outing him in front of everyone they knew. When she posted a video of the breakup to Twitter, it quickly racked up over five million views -- and inspired reactions across the internet.

When the video begins, Tiana and her friends are gathered in the kitchen with tequila shots and limes in hand. The calm before the storm.

She begins her mission with a little liquid courage.

The partygoers cheer for the birthday girl and take shots, many not realizing what’s about to come next. Meanwhile, Tiana shares a knowing look with the camera.

Tiana downs her shot and, lime still in hand, begins making a birthday speech thanking her friends and boyfriend. The words sound innocent enough at first, but the real intention behind them is quickly revealed.

“I deserve so much better."

Tiana turns to stare down her soon-to-be ex, Santos, who clearly has no idea what’s about to happen as his scorned girlfriend shifts gears from a celebratory toast to a humiliating roast.

The whole party was in on it.

Tiana makes it clear to Santos that, “every single person" at the party knows what he’s been up to, talking to “some girl" behind her back.

Things only got worse when Tiana went into detail.

She’d shown everyone at the party the “screenshots and recordings" of messages he’d been sending the other woman, including an identical photo to one he’d sent Tiana that same day.

“In case you didn’t figure it out, we’re over"

Tiana’s brother then bounds down the stairs with a duffel bag of Santos things and drops them in front of the outed cheater. Tiana proudly sends Santos away with a final, “You can get the f***k out."

Santos wasn’t the only one in the hot seat.

Tiana then turns her attention to another partygoer, Edgar, who she accuses of holding out intel on Santos’ infidelity. Edgar quickly answers that he had no idea what his friend was up to.

As Santos exits in defeat, the party cheers Tiana on.

Her friends throw in a few jabs at Tiana’s now-ex as he shamefully leaves the house. One calls Tiana a "bad b****."

With Santos gone the party begins again, but of course all anyone will be talking about for days is Tiana’s bold breakup. One partygoer reflects on the wild situation with a beautiful moral; “I ain’t cheating on my girlfriend ever."

Tiana posted the video to Twitter where it soon went viral, and was obviously memed into oblivion.

Of course, Santos was the butt of many jokes.

That awkward moment with Edgar got some attention too.

Tiana did not come to play, and neither did the rest of the internet.

Not everyone was convinced of Edgar’s innocence.

Some even called out the girl next to him, who was suspiciously frozen for the entire event.

He was so stoked to tell off his sister’s lame ex that he practically jumped for joy.

Seeing the 21 year old publicly out her cheating boyfriend was totally vindicating, and some saw similarities between her situation and other recent famous breakups.

Would you do what Tiana did?

Almost everyone has at least one heartbreak story -- it’s pretty much inevitable. While some choose to work through those feelings privately, others find catharsis in making their breakups public. Maybe airing all that dirty laundry isn’t your style, but it does make for a good story...

… but this one was at the couple’s wedding. The bride-to-be read the incriminating sexts instead of her vows and broke things off with the cheater, then invited everyone to stay and party with her at the reception.

Sometimes breakups are so nuts, they become public by accident.

This Twitter user was just enjoying some late night YouTubing when he heard his neighbors screaming -- first about dropping a phone in the toilet, then about the other woman who was on the phone.

There are so many insane breakup stories out there that Jimmy Fallon started #HowIGotDumped.

It didn’t take long for the hashtag to start trending with stories both heartbreaking and hilarious.

This Kiss Cam breakup is something else.

He waited to break up on camera, in front of an entire stadium. This girl probably dodged a bullet.

You thought it was hard meeting your person’s parents.

This couldn’t have waited until they got home? At least she got to drown her sorrows in dessert right away.

@jimmyfallon My friends bf have her a really, really pretty jewelry box (like the kind that has a mirror in it) for… https://t.co/f7zgDXR2RQ
— Maddie Cher Crew (@Maddie Cher Crew)1519854459.0

Now this just feels unnecessarily expensive. No one has ever wanted a breakup keepsake.

Honestly, a public breakup sounds much better than this.

@jimmyfallon Skype date with my girlfriend at the time and out walks a naked man from the bathroom behind her. Then… https://t.co/lWn88nKKi1
— Brandon Alberda (@Brandon Alberda)1519855370.0

Ending your relationship over a crummy Skype connection gives a whole new meaning to “we’re breaking up."

Have you ever been broken up with by an entire family?

During Christmas dinner, his family was drawing names for next year’s Secret Santa. My name was not included. #HowIGotDumped
— MaryLouWhatWho (@MaryLouWhatWho)1519854468.0

Also, who chooses Secret Santa a YEAR IN ADVANCE? This girl is definitely better off.

This is the literal definition of “gaslighting."

There are so many better, easier ways to breakup with someone that don’t pose the risk of wildfire.

Getting stood up and broken up with all at once

I was waiting for my boyfriend at the restaurant when the waiter came and removed the other chair and place setting… https://t.co/mgfU2kdIeY
— F🎗ck Cancer (@F🎗ck Cancer)1519857709.0

Come on, did the waiter have to take the whole chair away? A breakup that doesn’t even come directly from you boo is harsh enough.

Learning about your breakup from your boss might be the worst kind of public split.

The unprofessionalism is cringe-worthy. At least he got the day off.

Yup, breakups are never easy -- but some people do have a few heartbreak lifehacks.

Hey, if it’s not going to work out at least show them what they’re missing right?

Despite the potential for humiliation (or because of it), the prevailing opinion maintains public breakups are the way to go.

Nothing says “It’s Over" like cheap frosting letters that literally spell “It’s Over."

One can only hope that no matter how you break up, you’ll eventually find your own happy ending.

Oh, and feel free to hit Tiana up. She is single now.