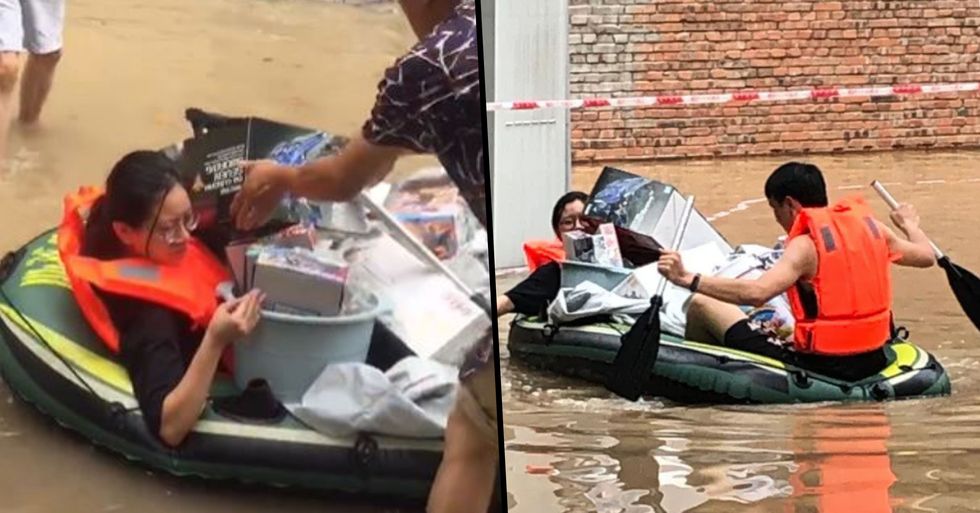 Floods in China are reaching a record level high, leaving thousands homeless all across the country.

One woman has gone viral after a video was shared of her risking her life, after her home was flooded, to save the most unconventional thing.

Husband's everywhere are praising her...

Everyone has asked this question at least once in their life...

What is the one thing you'd save from your house if you had to choose?

Most go for the classic answer; pets, family heirlooms, or even old photos.

But in the world of collectors, the brain works very differently.

There's only one thing on their mind when disaster strikes...

That's right, no love is deeper than that of a collector and their collection.

Some collectors spend their whole lives searching for figures to complete their set. Whether it be Star Wars figurines, Marvel, or good old G.I. Joe.

It'll surprise you just how expensive action figures can get.

This Elastic Batman looks like Stretch Armstrong, stretches like Stretch Armstrong, but this Batman figure was produced by a rival toy company called Mego, along with stretch versions of characters like Donald Duck , Mickey Mouse, and Casper. Kenner was less than impressed, and Mego was forced to drop the line. Only two Batmans are known to have survived, stretching their value up into the $15,000 area.

Don't get me started on this diamond encrusted barbie...

Designed by the diamond magnates at De Beers, this Barbie’s dress is encrusted with 160 genuine diamonds, and her jewelry is real gold. Costing $85,000 – We know diamonds last forever – but if you buy one, and your credit card bills will last forever, too.

But that's nothing in comparison to the "G.I. Joe a Real American Hero."

The most valuable action figure of all time is this 1963 prototype G.I. Joe. Handmade by series creator Don Levine, he sold for auction in 2009 for $200,000. And given that he’s a one-off, he’s pretty unlikely to be lurking in your attic, unless your attic is also the Gepps’s Entertainment Museum in Baltimore, MD, which is where you’ll find this number-one Joe on display to the public.

There really aren't any rules to being a collector.

It just requires you to be a connoisseur of your particular field.

Considering that some action figures can go for more than the cost of a house, It's no surprise that collectors keep their figures close to their hearts.

And in pristine condition.

Which is what one woman did after their house flooded.

The woman from China broke a window into their flooded house, to save her husband's precious action figures.

A video of the woman with the stash of toys in a rubber dingy has been shared globally.

It's almost overflowing with the "Gunpla" figures.

According to reports the husband couldn't swim.

So his wife agreed to go back for them.

Is that relationship goals or what?

The figures were from Gundam, a popular Japanese science-fiction franchise.

Her husband shared the video of his wife explaining the situation.

He said:  "I will never let you down in this life." We're hoping he was talking about his wife.

"He can’t swim. His wife swims across the Yangtze River and assessed that the risk of stagnant water is not high and she has a life jacket, so she decided to save Gundam."

To be fair to the man, these toys can fetch more than the odd dollar.

And from the amount he has, he's bound to have spent a lot on his collection. Scroll down to watch the video for yourself...

Since early June, China has been subjected to serious floods.

With officials saying it's the worst flooding they've seen in the country since 1998.

It's been caused by constant streams of torrential rain.

By the end of June, the flooding had left thousands homeless, with at least 81 people confirmed to be missing or dead.

In total, the floods have affected 63.46 million people in the country.

Close to five-hundred rivers across the country have been flooded, with some the highest they've ever been recorded.

Watch the video of the woman's heroic rescue below...

Take a look at what one husband has done for his wife after they moved into their dream home...