After a Hairdresser's Mugshot Went Viral, All People Wanted to Know Was Who Did Her Braids | 22 Words 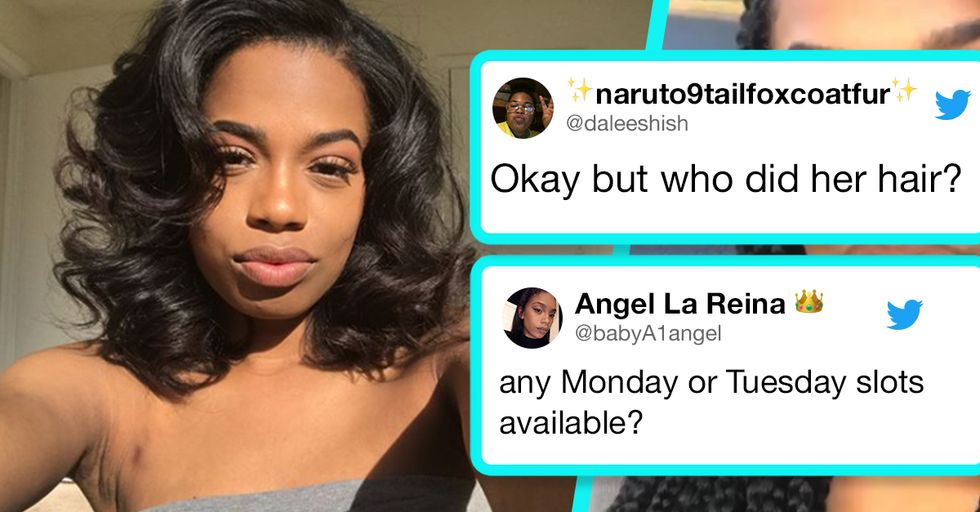 After a Hairdresser's Mugshot Went Viral, All People Wanted to Know Was Who Did Her Braids

When life gives you mugshots, use them to get hairdressing clients! That's how the saying goes, right?

Well, that's how it went for Shia Yearwood. The 24-year-old mother of two and hair stylist from Charlotte, North Carolina certainly turned lemons into lemonade when her mugshot was suddenly broadcast all over Twitter.

Shia told BuzzFeed News that she learned to braid hair when she was only seven years old.

For the last five years, she's been doing hair professionally. Yearwood learned to braid after her grandmother got into a car accident and couldn't use her hands the way she used to be able to.

Recently, Yearwood and the father of her kids split up and they filed restraining orders against each other. When her ex reported her for violating the order, Yearwood turned herself into the police.

On January 3, Yearwood was charged with a misdemeanor. She says she was trying to see her son, who was with her ex's parents at the time. Yearwood's mugshot ended up on @CharlotteMugs.

But no one was really concerned with the fact that it was a mugshot.

People immediately gravitated to the picture of Yearwood because of her hair. Everyone loved it and wanted to know where she got it done.

Seriously — there were dozens of comments on the tweet of her mugshot.

Everyone was jealous of Yearwood's braids and needed to know right away how they could achieve the same look. Of course, they didn't know that Yearwood was a professional hairdresser who did them herself!

So, being the savvy businesswoman that she is, Yearwood decided to retweet her own mugshot and plug her hair business.

Genius. So so genius. Yearwood's #BraidsByShia tweet has been retweeted more than 9,000 times. How do you think people reacted?

Well, they loved it.

Even people who didn't live in Charlotte tried to hop on Yearwood's client list.

It was honestly inspiring to see. At first, Yearwood thought the messages were just from her current clients who were just trying to be funny, but then things got real. "I thought it was just people being funny on my social media," she told BuzzFeed News. "But then I started to read the responses and I realized that they were actually very positive and uplifting."

Yearwood says she's booked solid for the next week thanks to new clients she got off Twitter.

As for how this all went down, Yearwood does feel a little strange about it. "It's more embarrassing because it's not like I went viral off my hair alone," she told BuzzFeed News. "It's attached to a mugshot, so people's perception of me might change, and that's the only thing I didn't like. Once they see a mugshot you're automatically guilty and that's not true."

Following all the attention, Yearwood reposted her mugshot to Instagram with a heartfelt message.

I keep getting asked to do interviews and tell my story. Lol now y’all know me ... I had the roughest month of my life and this is how I started my new year. Now let me tell y’all how God works. I thought I should take my pic with my braids bc I knew the Charlotte mugshot page was gonna do me dirty lol. So I said f**k it. Ima retweet it and shout out my braids. Now I’m getting asked to do interviews. Give my story. Tell how I turned my negative to positive. THIS IS HOW. Walk in the truth. Stay true to who you are ... Deposits are rolling in. New clients. New reach of people. New support and most of all. I wasn’t broken. I stood up tall and proud and I held my head high bc I wasn’t ashamed of s**t. I let my work speak for itself and I let my God work for me! We turning lemons to lemonade all year baby.

Yearwood showed exactly how to take a bad situation and make something positive out of it.

She recently posted this photo on her Instagram with the caption, "When they hate. Give em something to hate on. #HairByShi #BraidsByShia @hairbyshia." Hell yeah.