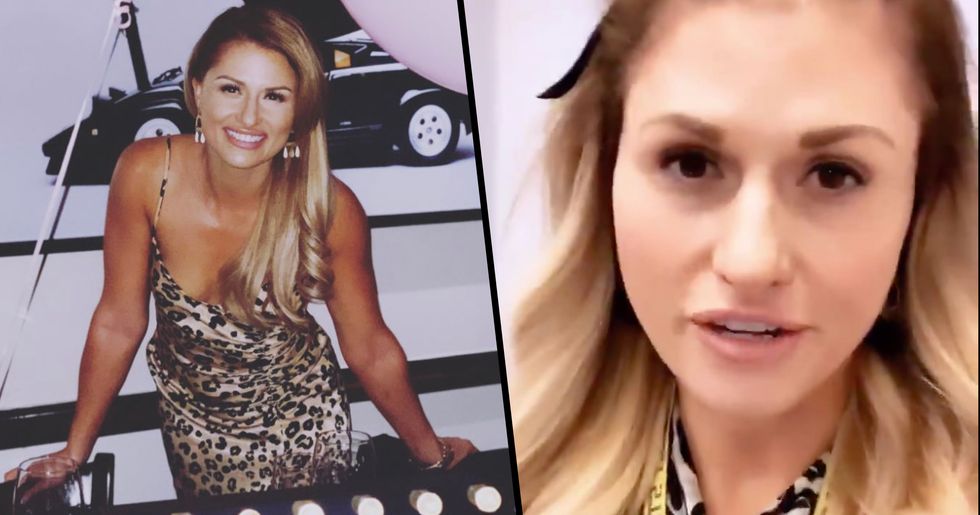 One brave woman has come forward to share the ridiculous story of the time that she found out that her boyfriend was cheating on her. Continue reading to learn more about her horror and for the (pretty funny) responses she got when she told her story.

They say that the couple that works out together, stays together.

Whoever said that, clearly had no idea what they were talking about.

Jane Slater is a reporter for the NFL Network. Despite having a successful career, a pretty face, and wit like you wouldn't believe, Jane has dated some real jerks.

And boy are we glad she did... it seems Jane's story opened up a whole can of worms.

A Fitbit spike appears to be a shared concern...

Apparently, Jane isn't the only one that found out something she wasn't supposed to through the powers of the training watch...

Maybe it was the same guy!

@SlaterNFL Jane! My ex husband got caught in an affair because he was wearing the training watch and heartbeat moni… https://t.co/ZiWqnmOxYE
— cooey (@cooey)1575556216.0

Or maybe people ought to start taking their fitness watches off before they... you know... go at it... Or maybe they should stop cheating - either way, this can't carry on.

I think I've been put off ever purchasing a fitness watch.

Dan has the right idea...

Exercise only ever leads to catching your mom or your partner getting it on after you've monitored their fitness stats.

Fitness watches are supposed to encourage us to work out...

But how effective are they, really?

Are we actually just doing exactly the same amount of exercise as normal?

Only tracking each and every step around the grocery store... as though each calorie burnt is a tiny victory.

People are even calculating how many calories they burn in the bedroom.

There's nothing sexier than that, right?

Fitness watches can really confuse you.

According to this guy's Apple Watch, burning a measly eighty-eight calories in one day was an all-time best - leading the man to wonder whether he had actually been conscious for the other three days he had been wearing it.

Seriously though, how many guys have been caught via Fitbit?

It seems as though this might actually be some sort of strange phenomenon that I had no idea about.

Why was she checking, anyway?

@chs93dlj Calling the police station bc I was at his home with balloons for his birthday and the behavior was out of character 😂
— Jane Slater (@Jane Slater)1575565542.0

I mean, from what we've learned, I would implore all my readers to go and check their partners' Fitbit activity.

Couldn't the guy think of an excuse?

Many Twitter-users were perplexed that Jane's ex couldn't think of a reason that his Fitbit was displaying activity at 4 am.

Some wives even came up with excuses for their own husbands...

@SlaterNFL If my husband’s activity levels are spiking and he’s unaccounted for in the middle of the night, he’s pr… https://t.co/ycsWyKiPHK
— Michelle Miller (@Michelle Miller)1575567081.0

"Ah yes, was just innocently drumming along to rock music in my car, heart racing due to the excitement of the impending Taco Bell." To be fair, that sounds about right.

I think it's safe to say that, in Jane's case, her guy was cheating.

He was not, no way, having a punch-machine competition against Bernie Sanders at 4 am. ...Bet he wished he'd thought of that, though.

The Fitbit: A device to catch adulterers and killers.

@SlaterNFL A Fitbit was recently used as evidence of time of death in a murder case. The husband’s alibi was proven… https://t.co/CRacp5mlY0
— MamaNeedsBaseball (@MamaNeedsBaseball)1575600466.0

In a recent murder trial, the court was able to prove a husband's alibi to be false, thanks to his murdered wife's Fitbit. Yikes.

Jane can laugh about her experience now...

@thEMANacho My girlfriend once said “one day we will laugh about this” as I sobbed uncontrollably in the car. I hav… https://t.co/WZk4Re8JOc
— Jane Slater (@Jane Slater)1575553259.0

I guess time is a healer...

Sadly, this wasn't Jane's only bad experience with a guy...

@CatherineLPC I also had a guy get drunk and bring another girl home forgetting I was spending the night there. We… https://t.co/jFYnvuodYT
— Jane Slater (@Jane Slater)1575526155.0

Boy, oh boy, I sure hope Jane has met someone nice since then.

Fitbits really are the be-all and end-all.

It seems that a Fitbit has many, many possible uses.

If you are going to get a Fitbit...

Maybe you should think about the implications of what getting one and syncing up with your partner really means... I'm talking 24/7 surveillance. Saying that... a Fitbit would be the ideal tool to try to become a professional Strava artist. Continue scrolling to see what I mean..