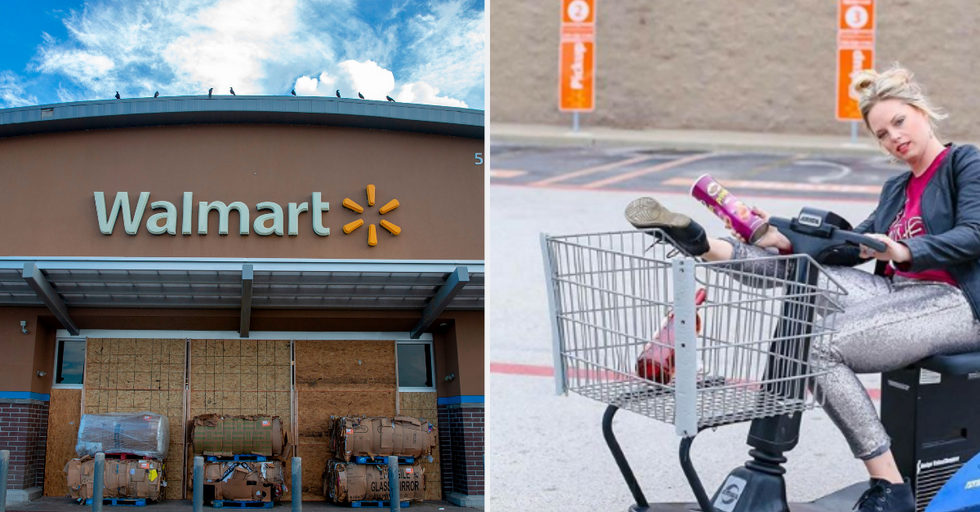 A mysterious woman broke the Internet after being banned from a Walmart for drinking wine from a Pringles can. Yes! You read that right.

This woman either has lots of balls, is off her meds, or she just doesn't care. Either way, you can't but help admire her spirit. Because not only was she drinking wine from a potato chip can, she also thought it'd be fun to ride around on an electric cart throughout the parking lot.

The Internet is bubbling with this story.

As they say, "Not all heroes wear capes." The visualization of this act would straight-up make anyone laugh.

Walmart employees called the police on a mysterious woman in the parking lot.

Of course, it occurred outside of a Walmart.

Not to be judgemental, but the well-known super store doesn't have the best reputation.

The woman was said to be wearing a blue jacket and black pants.

But when the police arrived, she was gone.

She apparently fled the scene.

The police arrived at the Walmart around 9:00 a.m. and there was no sight of the Pringles drinkin' lady.

Though they later found her at a nearby restaurant.

She probably had to pee or maybe her buzz wore off and she was hungry.

The police gave her some bad news.

When the police found the woman in question, they informed her that she was banned from the Walmart store.

She had been roaming the parking lot for hours.

And drinking an alcoholic beverage in the very early morning hours, riding on an electric mobility cart — often used for those with physical limitations. She was probably having a great time!

The container she was drinking from was, in fact, a Pringles can.

These cans are 10 inches tall and three inches wide. Guess you can understand why it took her some time to consume her beverage.

But, wait. What about the crumbs in the can?

I hope she washed the can out before she poured her vino into it. Surely, there were salty remnants.

It should be noted this story could be worse.

If she had been drinking the hard stuff — like whiskey or bourbon — things could have gone really bad.

I wonder what type of wine she was drinking?

Was it red or white? What's a good glass of wine to drink before the sun comes up? Are we certain it wasn't a Mimosa?

It is unknown if she was charged with anything.

Authorities are not releasing the woman's name and there is no indication she was arrested or fined.

We all have bad days.

And we do not know the mental health of this woman. She could be going through a crisis and this was her way to deal.

Maybe she needed to kill some time?

Most of us find creative ways to kill time when we need to. It doesn't get more creative than this.

And the Internet agrees.

Per usual, the Internet is chiming in on this woman's behavior – and in a good way. After all, she did no harm.

Inquiring minds would like to know what flavor of chips was in the can prior to the wine. Surely she ate those first.

Some say she is just living her best life.

We all have our own versions of "living our best life!" Maybe this is hers?

She really didn't commit a crime.

Other than having an open intoxicant, she wasn't driving a car — she was scooting around. And you don't need a license for that, folks.

Others applaud her actions.

And wonder what all the hype is about. She clearly was having a good time, all by her lonesome.

Some blame the Pringles brand for making the perfect size cup.

In her defense, it is a perfect solution for a cup.

And some of us understand that we all have a low point.

Maybe this woman is a mother and just needed to escape before her kids woke up?

Or perhaps she just needed a break from life.

We cannot be perfect all the time. Life is heavy for everyone and we all deal with it in our own ways.

But if she does have a mental condition, we do hope she seeks treatment.

Some people act out when they need help. Maybe this is her way of trying to get help?

And if her name is ever released...

She will probably be an Internet sensation. And maybe the Pringles brand will name a flavor after her? Or start to make Pringle wine glasses?

This might not be the last of the Pringles lady or a variation of her.

It probably will not be the last time we hear or see someone drinking from a potato chip can.

Will this be the next trend?

Just wait. In a few weeks don't be surprised if you see people reenacting this woman's behavior on social media.

This story kinda warms your heart.

Let's be honest here, most stories in the news are sad or scary. This woman brought a little laughter to the mix.

And we definitely need a break from all the politics in the news.

With all the hoopla of the government shutdown, this is a nice change of pace.

What if she a government employee on furlough?

Can't say I blame her. 800,000 federal employees (myself included) are concerned with how they will pay their bills this month. And that will make anyone go cuckoo.