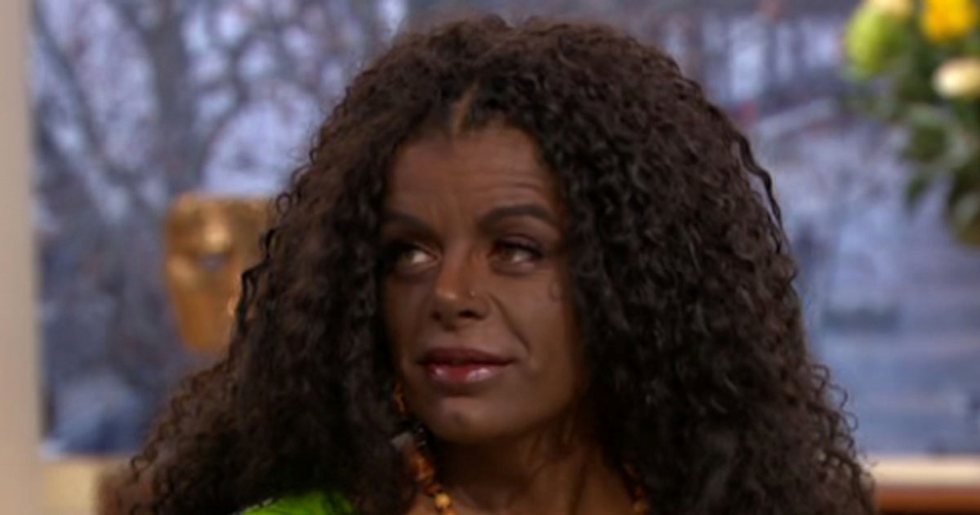 Woman Who 'Changed Race' Thinks She Could Have A Black Baby

There are some stories you hear in life which make you marvel at what humans have created, and how they have thought of such clever inventions. Then there are others who make you wonder at how humans have survived for so long.

This is a story that seems to defy Darwin. It seems like there are some people who make it through despite natural selection.

Enter Martina Big, the woman who believes she has changed race and so will have a different colour of baby.

A woman actually thinks she has 'changed race'.

Yes you read that right. There is a white, blonde, German woman who thinks that she is now a different race to the one that she was born as.

Why would she think that?

This woman has been using melanin injections to darken her skin colour. She used to be white with blond hair, now she has darker skin with darker hair. Ergo she is now a different race…

Melanin is the pigment that gives human skin, hair and eyes their colour. Having darker colourings means that there is the presence of more melanin.

Melanin helps the skin to be protected from the sun. Freckles are 'small, concentrated areas of increased melanin production.'

Before she began her transformation, she was Martina Big; white-skinned, blond-haired German air hostess. Now she feels herself to be none of these things.

What so now she's not German either?

That's right. Early last year Martina travelled to Kenya, where a local clergyman baptised her. She claims he declared her a 'true African woman', with the Swahili baptismal name Malaika Kubwa (which roughly translates to Big Angel).

And wait until you hear about the surgeries she's had.

One of the many surgeries that Martina has undergone includes drastic breast implants. In fact she has had over 23 procedures.

Does she really have Europe's biggest breasts?

She is currently a size 32S. It's hard to disagree that they will be Europe's biggest at that size, but you never know who else is out there.

She decided to become a glamour model.

Martina was working as an air hostess, with her now-husband working as a pilot. She decided to give up her day-job and instead become a glamour model.

She had to make a few changes along the way.

It was her husband who encouraged her to become a model, but she felt like she need to make some surgical changes. So in the spirit of a nip here, and a tuck there, she had work done on her waist and legs… as well as her lips, nose and teeth… Just a couple of changes then!

So she came to the only rational conclusion: that she needed to get a new bum, the size of her boobs, for balance. Luckily surgeons persuaded her to go for something less drastic.

So what changes have the melanin caused?

The only change that the melanin injections have caused is that she has more melanin in her skin. Usually melanin is produced by cells called melanocytes. She's just doing it with injections. This makes her skin a darker colour. Her hair could be darker too, but hair dye also does that so it's hard to say.

And she thinks that now she is a different race?

That's right. After getting a substance injected into her skin, Martina believes that she is now a different race. This is not how race works.

So does going on holiday change your race?

No of course not. Coming back from a hot climate with darker skin does not mean you are now a new race too. Sun exposure causes an increase in the production of melanin, making people seem more tanned or freckly. It doesn't suddenly change someone's race.

What about having a harsh winter?

You know, the kind of winter where you don't go outside ever because it's so cold. You get really pale and hairy, because you're so covered up that your body looks very different to when you parade it in the summer. Nope, that's still not a different race. That's just you in winter. Perhaps it is the real you.

Race is linked to a shared culture and history. It is passed down through generations, through shared experiences and through genetic heritage. Injecting melanin does not mean that you are a different race.

Why racism is so very stupid.

This case does highlight the good point that you shouldn't judge people based on the colour of your skin. People use the colour of skin to cast decisions, biases and stereotypes about people. But really, actual skin colour is just about melanin. And after reading about Martina I think we can all agree that melanin does not equal race.

So back to this baby thing…

She truly believes that she and her husband could have a black child. Having injected a substance in to darken her skin, she now believes her child will also be a different race.

Well what race is her husband?

If it was just because her husband was black, then sure, her baby probably wouldn't be so white. But he is also, originally a white, blond, German.

He is of the 'medium' race.

He also uses the melanin to darken his skin, but he has decided to stop with more of a strong tanned look. For this reason, he self-identifies as 'medium'.

And these two are going to have a baby?

Apparently so, although there is some discrepancy about her age. She claims to be 29, but some people think she might be 40, so then it might be a struggle. But you never know.

And this baby is going to be black?

Well we don't know what colour it would be at the moment, although we could have a guess. What she actually said was: 'I'm pretty sure it will be black, or milk chocolate, or a little bit light.'

She said it could be what?

Yes Martina actually said that she thinks her baby would be milk chocolate. As in most children's favourite drink.

People are not happy about Martina Big's claims.

There has been quite an outburst on social media. A lot of people believe that she is being racist by claiming to be a different race after changing the colour of her skin with injections.

And this was on This Morning?

Yes on one of Britain's favourite morning breakfast shows, Martina Big announced that she would have a milk chocolate baby. Many people may well have spit out their morning milk chocolate at this point in disbelief.

This Morning is known to have some pretty outrageous guests.

This wasn't the first time host Holly Willoughby has struggled with her reaction on This Morning. In 2017 a woman went on the show who was unhappy with her vagina. She underwent treatment, live on air, to get a designer vagina instead. Holly couldn't handle it. Or the time that she had to use a shake weight?

Or how about the time Holly and her co-host Phillip Schofield turned up drunk?

Something of a cult appearance over the pond. The arrival of a drunk Holly Willoughby and Philip Schofield has to go down as one of the best ever, live television broadcasts. They arrived in their clothes from the award ceremony the night before and they could not stop giggling. Excellent entertainment.

So how did Holly Willoughby react to this milk chocolate baby?

Holly Willoughby struggled to find the right words, partly because there are so few right words out there to find. John Barrowman was on the show too and said that he supports people doing what they want with their own bodies.

All the best to this woman.

Freedom of will is a wonderful thing that helps to build a strong democracy. Everyone is unique, although some people are more unique than others.

I guess we'll just have to wait and see.

If she wants to have a baby then that is her prerogative. We'll just have to wait and see if the melanin has altered her DNA and genes, or if it is just superficial.