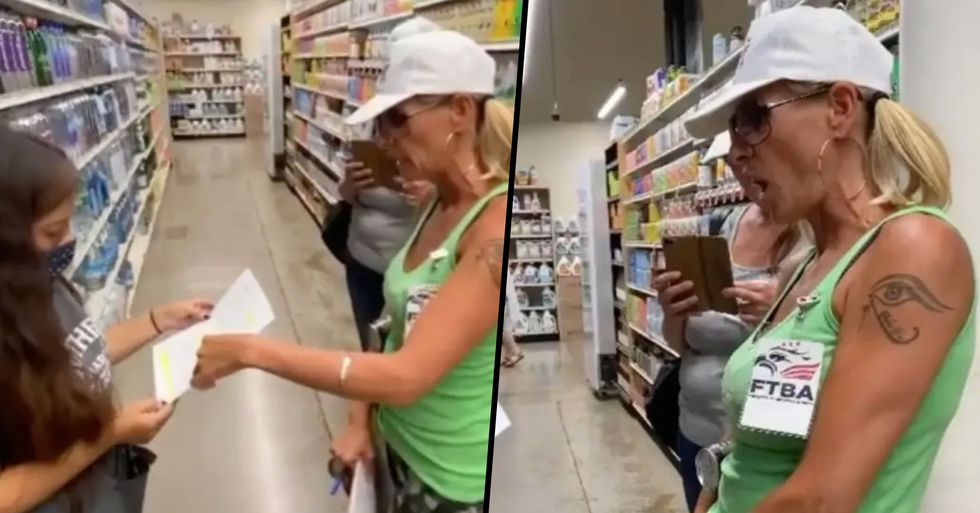 A viral TikTok has shown a woman claiming she is from the "Freedom to Breathe Agency" telling an essential worker that she could go to jail for enforcing face masks.

Although, this isn't the first time the so-called Freedom to Breath Agency has drawn in attention...

This video is truly shocking...

And this time, people are simply in shock over the sheer ridiculousness of the whole situation.

A TikTok has gone viral showing a woman in a store without a face mask.

Of course, we've all seen these stories before, but this one is a little different.

The video shows a grocery store worker being targeted by this woman.

@KalhanR Oh hell no. The police would be summoned and they would be banned from my store.
— WaterBluSky (@WaterBluSky)1596838871.0

Liz Chavez, is a supervisor at a health food store in Orange County, California, and as an essential worker, she's been working through the pandemic, dealing with those refusing to wear masks.

But this particular customer was very different from the others.

"I went up to them like, 'Hey, in order to be inside the store you’re required to wear a mask,'" she explained to Buzzfeed.

The customer responded by stating she doesn't need to wear one.

But it wasn't because she was medically exempt...

The customer went on to state that she was from the "Freedom To Breathe Agency."

Her companion then whipped out her phone to film the incident.

The woman, identified as the FTBA's founder, Lenka Koloma, said they were "making sure that people's constitutional rights, civil and federal laws are not broken."

She went on an entire rant to Chavez...

"You personally need to take this to your manager because you personally can be sued for this, OK?" Koloma told Chavez while handing her a piece of paper.

"You are putting yourself into major legal liability — you personally."

"The piece of paper they gave me was basically telling me I could go to prison for up to 3 to 5 years and I could get fined up to 10,000 dollars for telling them to wear a mask if I’m not a doctor," she said.

The so-called "Freedom to Breathe Agency" - which is not a real government agency - has previously been the subject of a warning from the Department of Justice after its stunts.

The group had also been distributing "face mask exempt" cards that claimed the holder was exempt from wearing a mask "under the Americans with Disability Act."

The Department of Justice said in a statement that the cards were not issued by the government.

"Do not be fooled by the chicanery and misappropriation of the DOJ eagle," said US Attorney Matthew G.T. Martin. “These cards do not carry the force of law. The ‘Freedom to Breathe Agency,’ or ‘FTBA,’ is not a government agency."

Koloma and the other woman left the store after the exchange captured in the video.

"They weren’t there to shop," Chavez added. "They honestly were probably just waiting for somebody to come up to them and ask them to wear a mask so they could do this."

Koloma, the woman in the video, spoke out after it went viral.

She told Buzzfeed that she and her companion "both have medical, health conditions and also religious beliefs that do not allow us to wear a mask," but declined to say what those medical conditions are.

She also claimed that people like Chavez asking her to wear a mask could face legal action as it is akin to impersonating a medical doctor.

She also denied impersonating a government agency. "That’s absolutely false because we are a legitimate organization, we introduced ourselves as FTBA, the Freedom to Breathe Agency. There’s nothing illegal or fraudulent," she said.

You can watch the moment for yourself here.

Though be warned: You may need to cleanse your ears, mind, and soul after watching.