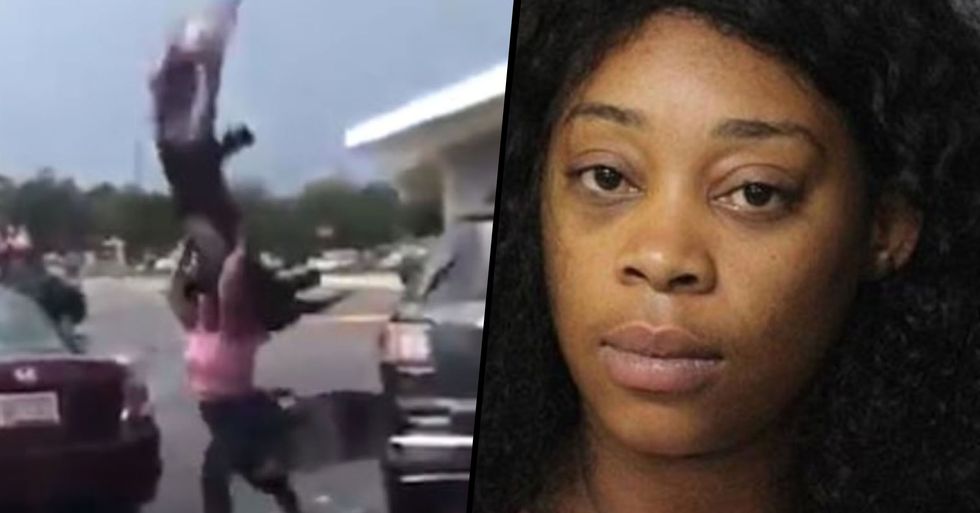 Relationships don't always work out, and it can hurt. A lot. But nothing warrants what one woman did to her ex-partner in a parking lot.

Keep scrolling for the sickening videos captured by passers-by...

Sometimes it takes a while to realize you're actually less compatible than you first thought.

Most people come to accept this and move on with their lives.

But heartbreak can cause a surge in built-up emotions.

That can sometimes end with things getting pretty heated.

Although attempted murder can never be justified.

No matter what happened in the relationship.

One woman has fatally injured her partner after doing the unthinkable in a store parking lot.

A woman from Virginia was arrested on Thursday.

After videos of her running her partner over were released.

According to witnesses at the scene, she intentionally hit her partner with her car.

Tripp can be seen screaming at the man who's lying unconscious and bleeding on the ground.

The man can be seen lying behind the car.

Tripp walks around the car towards his body.

The videos are incredibly disturbing.

She can be heard shouting: "Every day of your f--king life, every day! Every f--king day!"

Clearly the premeditated attack was related to their relationship.

"That's what happens when you leave your wife," she screams at his lifeless body. "I gave you 18 years of my f--king years!"

Tripp picks up the bumper that broke off her car.

Throwing it down on top of him.

Onlookers repeatedly shout that he is dead.

Another can be heard telling a mom to take her child away, as she stands to watch.

Why you would let your child watch that, I have no idea.

When emergency services arrived, the man was taken to Norfolk General Hospital.

It's been confirmed that he has life-threatening injuries...

...and is currently in critical condition.

The attack has been confirmed as a domestic-related incident.

It was reported that the accident took place at Janaf Shopping Center at 3:45 PM.

Upon arriving, it was pretty obvious this was no accident.

Tripp was taken into custody straight away.

And is being charged with aggravated assault.

She is currently being held without bond.

Watch the terrifying footage below...

Surely she should have been charged with intent to kill?

She doesn't stop, even when he's down...

Keep scrolling to see why Starbucks Karen thinks she deserves half the money raised for barista she abused...