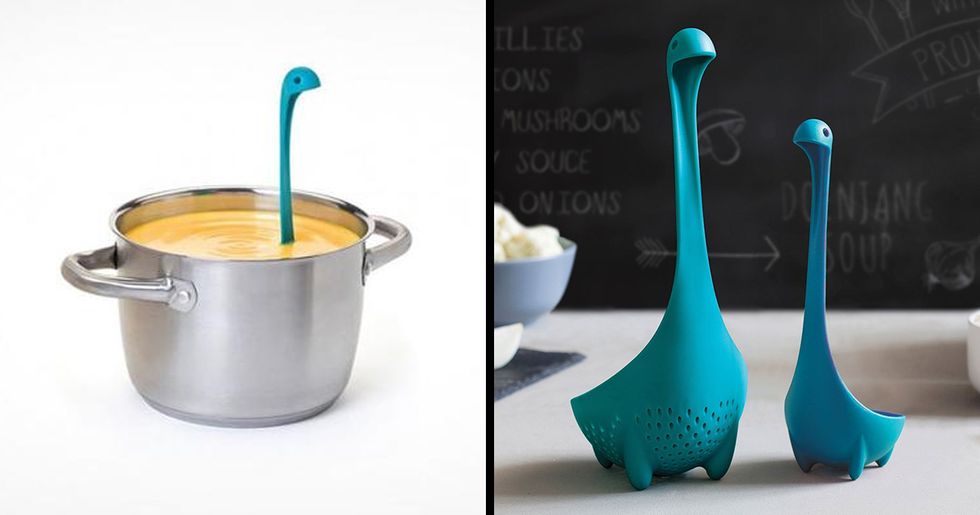 There is a soup ladle you can buy for very little money on Amazon that looks like an adorable version of the Loch Ness Monster. He's got a little face and little legs under the scoop so he can stand up straight. As far as inanimate objects go, this ladle is definitely one of the cutest I have seen. And apparently, one social media user thought so too.

Margaret bought this creature/ladle, named him Samson, and started an Instagram account for him. She takes him on adventures and does activities with him, and it is pretty much the best thing ever. Samson loves yogurt and Spongebob and making cookies. He is really the most talented soup ladle I have ever come across. Because Samson is an utter delight, the account went totally viral. @SamsontheLadle now has more than 108,000 followers, and to be honest, he deserves every single one of them.

See? I told you he was cute. He is a ladle, and somehow, Samson is the perfect name for him.

He isn't just cute, though.

He's functional, too! If you think Samson is just looking, think again. The boy can scoop stuff!

His Instagram account was immediately a hit, and this level of celebrity was a lot for Samson to handle. But he knows that he's been given a special opportunity, and he's not about to waste it.

Look, he may not have arms, but that doesn't stop Samson from lifting weights. He's really an inspiration that way.

He's only human, after all. Well, I mean, not human. Soup ladle. But you get the idea.

Of course, Samson isn't all muscle and soup-ladling skills.

He is also an avid reader. What? You didn't think a soup ladle could read? Wow. Your prejudice is showing.

Living a very active lifestyle, as Samson does, can be exhausting.

He loves to cuddle up and take a nap, and honestly, it would be a dream to join Samson for a cuddle sesh. He looks like he's good at it.

Samson's life is full of firsts.

Samson does look a little freaked out by the tunnel, but that's understandable. He's been living a sheltered life until now. It might take him some time to adjust.

Time to shop for Pop-Tarts!

Samson is serving a very Jim-from-The-Office look right now. I really want to know what he thinks about Pop-Tarts.

And what better way to start than with the masterpiece that is Stepbrothers? He probably loved it.

It's great because it's scoopable (and Samson is a scoop), plus it has all that good bacteria for your gut health.

OK, Samson, chill with the yogurt.

He's a little obsessed. Like, yogurt is good, but it's not that good.

If you need an errand-running companion, Samson is your soup ladle!

I really love the image of a grown woman taking a photo of a soup ladle in front of a mailbox on the street. It's bringing me great joy.

He may have short legs, but that doesn't stop Samson from dancing.

Look at how confident he seems in front of the mirror. Go, Samson, go! Dance your little soup ladle butt off!

After a dance workout, you need to power up with a nutritious meal.

But stay away from the burners, Samson! I don't think fire and plastic soup ladles are meant to be combined.

Obviously, Samson hangs out at the mall.

Where else will a soup ladle get everything he needs to stay on trend? Here, Samson is taking a break before hitting the kitchen section at World Market.

He even rides the escalator!

I know that technically he's just a hunk of plastic, but he's really so cute I can't take it.

When shopping is done, school begins.

Samsom really wants to be an intellectual soup ladle, and he's willing to work hard to learn all he can. Good for Samson.

As a tall soup ladle, Samson sticks out like a sore thumb in the snow.

You might not think a soup ladle would be particularly useful in an office setting, but you'd obviously be wrong.

Poor soup ladle has a cold. I didn't realize he had a nose that could be stuffed, but here we are.

No matter your gender, no matter what material you are made up of, you can enjoy music. Samson proves this point.

I think he was probably a huge fan. Deadpool is a hero who would understand being a soup ladle in the world, being different and having to fight to be respected.

Maybe I'm reading this wrong, but Samson seems way more into the encounter than the cat does. Typical cat.

And now he's totally wired. Look at his one eye! He has totally lost it.

You thought Samson was all alone, didn't you? Well, he isn't anymore. He has a new friend named Geraldine, and she is great.

They watch TV together.

They love Spongebob, and honestly, who doesn't? As far as sponges go, he is the most hilarious one.

On April Fools Day, Samson and Geraldine played a joke on everyone.

They announced that they were a couple! But in fact, they are not. Geraldine has a girlfriend who lives in Dublin, Ireland.

That doesn't mean that Samson and Geraldine aren't best friends, though.

They go bowling together and feel particularly connected to the pins. Maybe it's the shape...

Here they are having fun at the beach!

Samson has an incredibly full life for a soup ladle. And he's just getting started! Share this with someone who needs to meet Samson!