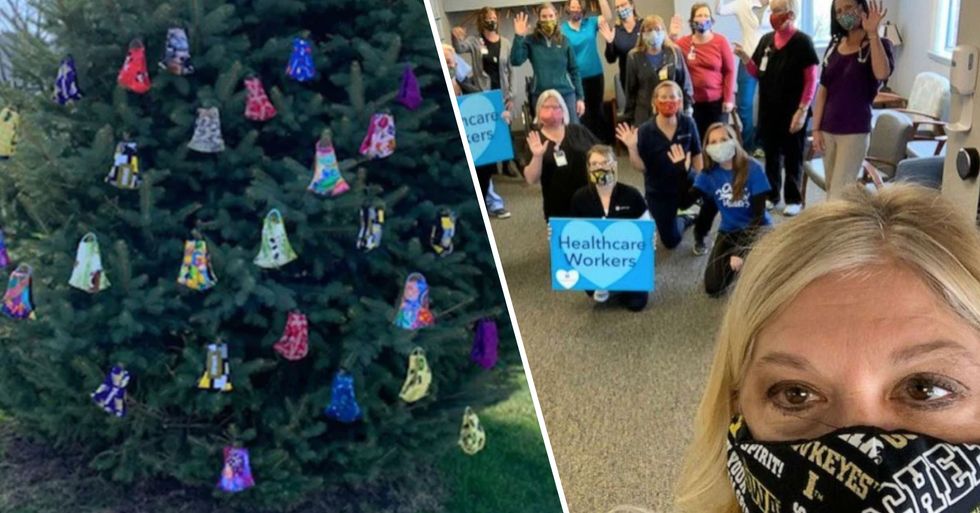 An incredibly kind and selfless woman has been making hundreds of homemade face masks for local residents, and she displayed them in the best possible way...

Right now, we need each other more than ever.

The global pandemic has well and truly taken over our world and life as we know it is no more.

Here in the United States, we have become the worst affected country in the world...

And things just don't seem to be slowing down.

Healthcare services across the country have been stretched to their limits...

And our heroic frontline workers are working around the clock to help others who are infected with the deadly virus.

Even though we have been coming together as a country to support our essential workers...

This morning nurses protested for PPE - in front of the White House. They read the names of healthcare workers who… https://t.co/JvdxqV3X8o
— Joshua Potash (@Joshua Potash)1587477587.0

The healthcare sector is continuing to struggle massively and basic equipment is now running low.

There is, for some reason, a global shortage of PPE.

PPE stands for Personal Protective Equipment, and in many different areas of the world, healthcare services are running dangerously short on their supplies - meaning doctors and nurses are often left without gloves and facemasks.

But this is also something that is sadly out of our control.

Deb Siggins decided to do something about this, however.

Fifty-five-year-old Deb is from Lisbon, Iowa and she is an avid knitter by trade.

Last month, she saw that her local hospital, Unity Point St. Luke's, called out for a PPE donation...

Of course, Deb couldn't get her hands on PPE either...

So she decided to improvise and make her own.

She set herself an optimistic goal...

"My goal was to make 100 and donate them to the hospital, but then my friends and family wanted some, too," Deb told Good Morning America.

Thanks to her skills from sewing and knitting, Deb was able to be creative...

"I just felt like [my sewing] is a gift that I could put it towards other people because it's a gift that God has given me," she said.

But Deb realized a small problem...

She found that she wasn't practicing social-distancing by handing out her masks to the essential workers... which is when the tree comes in.

Deb has a tree in her yard that she and her husband typically decorate for holidays such as Christmas and Easter...

So they decided that instead of placing eggs under it, they would hang a mask on each branch for people to help themselves.

Here is the tree in all of its glory...

The tree holds around thirty masks at a time, and in total, the selfless woman has made around 400. "It was really cool to see people driving up, grabbing a mask and leaving. ... It's been a hit," Deb explained.

Deb is delighted that people have been using her masks...

"I'm a giver, not a taker, so I feel really good," she said about how she feels when she sees people use her face coverings.

She has covered all the costs herself...

And she has also made masks for her co-workers, her local fire department, grocery store employees and is now working on more for the elderly patients at the medical practice where she works. Incredible.

"There's a big demand out there," she said, especially after the Centers for Disease Control and Prevention began advising the use of cloth facial coverings during the novel coronavirus pandemic, even by those not exhibiting symptoms of the disease.

We need more kind and selfless people like Deb!

For more heartwarming stories, keep scrolling to read about the college student who created face masks for the deaf...