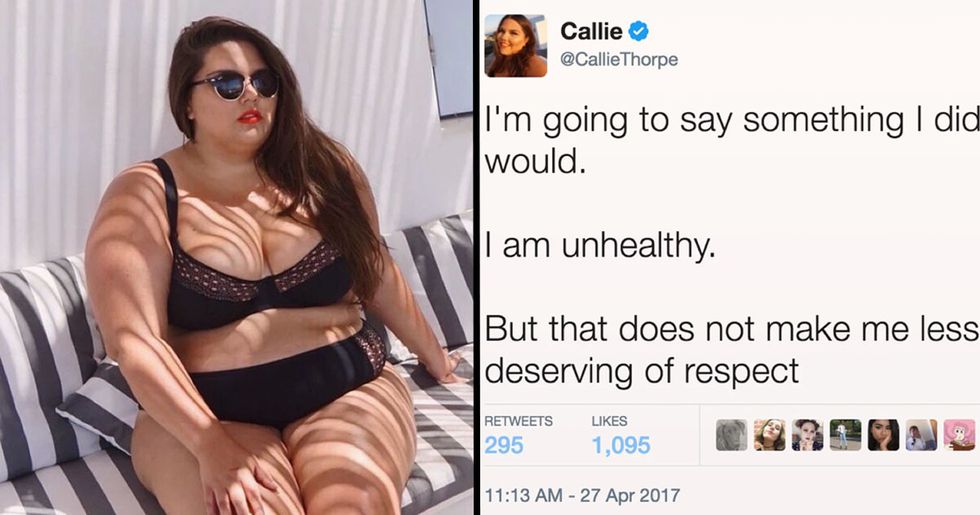 Woman Demolishes the Hypocrisy of Fat Shaming in One Powerful Tweetstorm

"Fatphobia" is a form of bigotry wherein one associates the concept of "being fat" with ugliness and inferiority.

In a society that is continuously evolving, it's difficult to think that the issue of "fat-shaming" still exists, but you only have to go onto social media to see the evidence with your own eyes. While some are just out here trying to live their best lives, we have a group of fatphobic people rearing to tear them down. And that is not okay.

Recently, a beauty blogger decided enough was enough. Keep reading to find out how her one tweetstorm gained popularity for absolutely demolishing the hypocrisy of "fat-shaming."

I don't know if you've heard, but this is Callie Thorpe.

A Welsh beauty and lifestyle blogger who is taking the world by storm with her positive outlook on life.

Instead of just posting pictures of her wearing pretty outfits (but she does that too!), Callie centers her work around promoting body positivity. She is giving the beauty industry yet another reality check.

From wearing short-shorts to swimming costumes, Thrope is unapologetic about her body.

So unapologetic, in fact, that she's started her own movement called "The Confidence Corner."

The brand, which she launched very recently, aims to spread "self-love."

With the help of story-telling from people around the globe, Thorpe aims to create a safe space for those who might not have reached the level of self-appreciation that they want to.

She hopes that, one day, they might find it in them to tell their own story.

The best and most reassuring thing about the idea is that love must come from one's self, as opposed to others. It's such a healthy concept for the beauty community to have adopted.

Putting yourself out there, on a public platform isn't always an easy thing to do...

You've got a story to tell, but you don't know how people will react to it, so you just sit back and watch. It's 2019. No more sitting. No more waiting. According to Callie, it's time to spread "the self-love bug."

And that's exactly what Callie's fans in the "The Confidence Corner" intend to do.

Check out some of these inspiring stories that really made us want to appreciate ourselves a lot more.

"We live, I regret to say, in an age of surfaces."

"A survey conducted by the National Rosacea Society and Galderma asked people to describe their perception of someone based only on their appearance. Those with rosacea were perceived to be more nervous, shy, and quiet. Less relaxed. Less charismatic. Less outgoing. Less likely to be in a relationship. So as much as it terrifies and upsets me to post photos of myself mid-rosacea-flare, it's important because we can't change people's perceptions without educating them. We all make split-second judgments based on appearances (often without knowing) but hopefully, misconceptions about skin conditions are changing as more people talk about them 👏 . If you have any questions about rosacea, click the linktree link in my profile and have a look at the FAQ post linked there for tons of info and advice (I'm not looking for skincare/diet/medication advice at the moment!)"

"Never do this to yourself!"

"Last year I tried on this dress and although it was a little snug, I told my friend to keep this size because of course “I’ll lose weight by next year and it will fit perfect". Next year came around a little quicker than I first thought and the pressure I felt to lose weight and fit into the dress was horrible. If you’re going to be a bride or a bridesmaid or if you’re getting a special dress for an occasion in the future, don’t order a size smaller with the intention of slimming into it. The fear and anxiety you feel as the event draws closer is just not worth it. What do we even do it for? So that the tag is a lower number on the size scale? You’re going to look gorgeous no matter your size and have a wonderful time, it’ll be even better if you’re comfortable!"

But as with everything positive in the world, there's always negative to balance it out.

Being confident seems to be a sure-fire way to gain haters. It's almost as if some people can't stand the thought of having positivity in their lives, so they need to spew out hateful comments to counteract it.

And Callie is no stranger to this.

She, along with other plus-size models, have received a lot of backlash for promoting what others seem to think is "an unhealthy lifestyle." People with nothing better to do have taken to her social media platforms in order to leave vile comments on how they believe the lifestyle blogger should be living.

At one point, the hate got so bad that she was forced to "take a break."

Callie decided that it would be best for her mental and physical health if she removed herself from social media platforms for a while. She expressed that they were just "full of rampant fatphobia [and] strong opinions."

But, before she left, she made this bold statement.

In a short twitter thread, the blogger completely destroyed all of the haters with some painful home truths and we're totally here for it!

She starts with this...

After reading this initial tweet, we knew we were going to be in for a treat.

It seems as if people forget to look at their own flaws before pointing out someone else's.

"That also makes you unhealthy."

Just because some of our own flaws can't be seen physically, it doesn't mean they make us any less unhealthy.

And she continues so people will understand...

She expressed that she would never shame others. It seems, yet again, that the haters lack empathy. The fact that they've even forced her to have to release a thread like this sickens us.

Don't change for anyone, girl!

The standards set by society are reinforced within the beauty community, though changes are slowly taking place.

"Health is not a moral obligation."

Fatphobia stems from the idea that "fat" people have no restrictions, so, therefore, they must be immoral. Wake up, honey, it doesn't work like that.

Some people have a slower metabolism rate while others have underlying conditions.

And that drastically affects the rate that the body can burn fat. It works the opposite way as well. Some people's metabolism is much too quick, so no matter how hard they try, they will not be able to gain weight, which is also very dangerous.

And Callie decided to end the thread with a reality check.

And this is precisely the reason that her fans adore her.

She's not afraid to call out BS when she sees it. And she also looks amazing while doing so.

She posts amazing content of herself enjoying life while spreading a positive message about being the best version of yourself that you can be. You inspire us, Callie, keep doing you.

And it's not just us normal folk that are subjected to this kind of torment...

Some people had the audacity to target Game of Thrones actor, Jason Mamoa, giving him grief for what they believed was a "dad bod." Yeah, weird, right? His fans weren't happy, that's for sure. Keep reading for the full story.