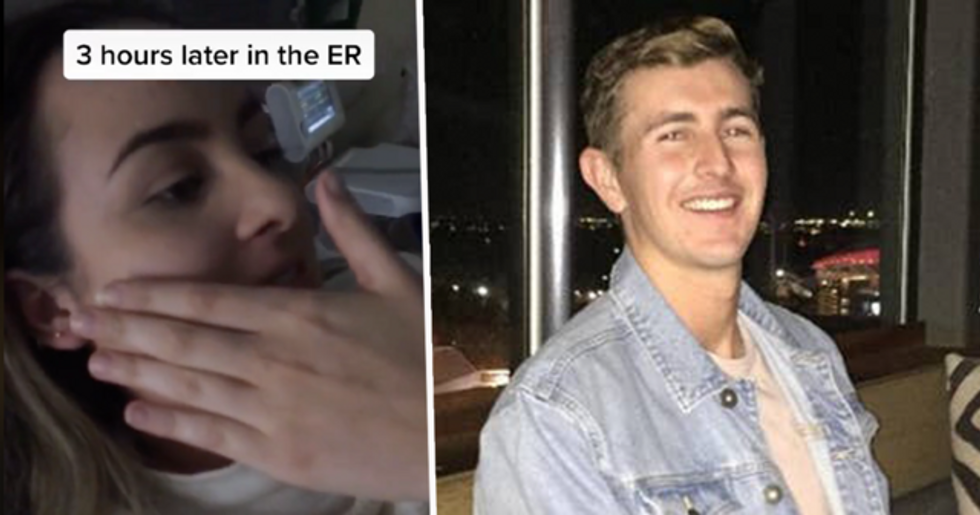 A woman has shared the footage from her hilariously disastrous Tinder date where she ended up being rushed to the emergency room...

We're living in the digital era of dating.

Long gone are the days where you meet your soul mate out in a bar or in your local coffee shop... These days, true love is found online.

A staggering number of relationships are started online these days.

As of 2017, forty percent of Americans admitted to meeting their partner or spouse online.

Finding a partner is now at the tip of your fingers...

Literally. Thanks to the infamous dating app, Tinder, potential love interests from your local area are listed and displayed for your own viewing pleasure.

You can quite literally browse through your prospective partners...

Just as casually as you would while browsing for groceries at the supermarket.

All you need to do is select your best photograph...

And boom! You've met someone, all at the touch of a button (or the swipe of a screen, in Tinder's case).

Obviously, Tinder is doing something right. But, with its many pros, comes its many cons.

Meeting up with a stranger for the first time can be incredibly nerve-wracking...

Like going on a date wasn't scary enough, the mystery and awkwardness of meeting someone new for the first time adds immensely to the pressure.

Will they look like their picture? Will there be chemistry? Will they be a total psychopath?

The questions are endless.

But one woman has recently shared her disastrous Tinder story...

And it had nothing to do with her date not looking like his photo.

Samara Hnaien, from Sydney, Australia, recently met up with a man whom she had matched with on the dating app.

The twenty-two-year-old matched with twenty-three-year-old Charles Harris, and the pair were quick to strike up a conversation.

So they didn't waste any time in organizing a date.

The couple settled on Saturday night to finally meet up.

But, thanks to the ongoing lockdown, all the bars and restaurants are closed.

So their date turned into a cosy night in. "As everything is shut, the date was just Samara coming over to my house to hang out," Charles told BuzzFeed. "The date was going very well, so we ended up kissing..."

Well, little did Samara know, but things were about to take a dramatic turn for the worst.

But, just before his date, he had eaten a peanut butter sandwich.

Now, while this wouldn't be relevant for most people...

For Samara, it is crucial, because she suffers from a severe peanut allergy.

As they were kissing, Samara's mouth started to tingle...

And she knew straight away that she was having a reaction. "My whole mouth started tingling mid-kissing basically, which is the first sign to me that I'm having a reaction, and I hadn’t eaten anything, so I thought he must’ve had something that had peanuts in it," Samara recalled.

Straight away, Samara instructed Charles to inject her EpiPen into her thigh...

Quite the mood-killer, isn't it?

Charles then called for an ambulance...

Where he accompanied his unfortunate date to the emergency room. But, remaining in good spirits, Samara hilariously documented their trip, and filmed herself laid in the back of the ambulance, writing: "He ate a peanut butter sandwich before I went over... I'm anaphylactic to peanuts!!!!!!"

Obviously, Samara was very impressed with her date's quick thinking.

"He handled the situation as best as he could’ve. I was actually really impressed," she said. "He was really caring and genuine and made me feel at ease and kept reassuring me to not feel embarrassed or anything like that because I was just mortified and felt so bad for him... It’s a pretty confronting experience stabbing someone with an EpiPen especially when you first meet them."

And, to make things even more romantic...

Charles waited with her in the emergency room for 3 whole hours. Who said romance is dead?

Her Tinder date didn't leave her side the entire time.

And, writing on his own TikTok, Charles promised that, if the story was to go viral, he would take Samara out on a real date once everything has reopened.

Well, it certainly has gone viral...

Samara's video, which you can watch above, has been viewed over 350,000 times on her TikTok account alone. We now await with bated breath for updates on their second date, which I'm sure will involve no peanut shenanigans... For more on the world of online dating, keep scrolling to hear what it is that makes people reject Tinder profiles...