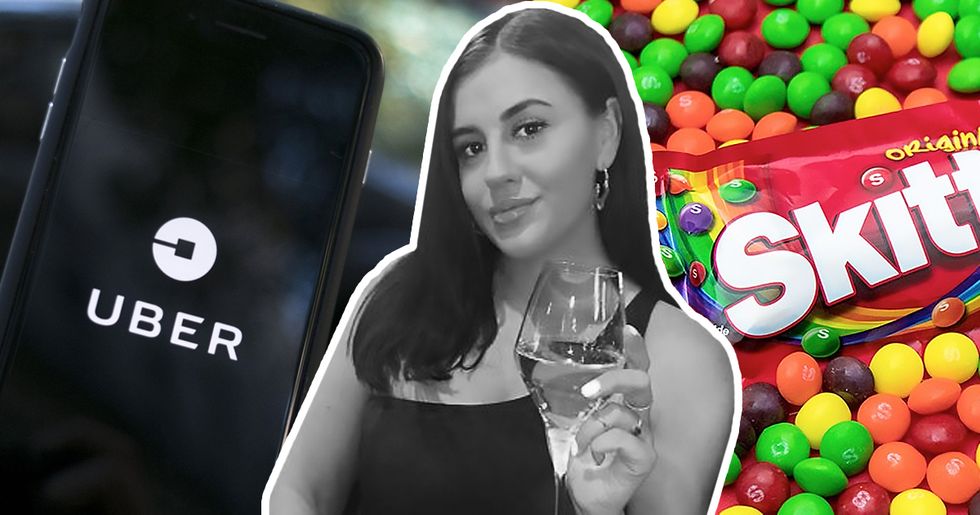 Woman Fined $100 for Dropping Skittles in an Uber

Ride-sharing services like Uber are transportation game-changers. We can open up an app on our phone, press a button, and, almost as though by magic, have a car appear and take us anywhere we want to go. At this point, it's hard to imagine our lives without Uber.

In fact, ride-sharing apps are so ubiquitous and helpful, it makes you wonder why they weren't invented sooner. But after you hear the story of Lydia Williams, you'll know why — making sure all the logistics of putting strangers in each others' cars is tricky. For instance, what happens if either the driver or the passenger is a slob?

Or, to get even more complicated, what if either the driver or the passenger says the other one is a slob?

That's the conundrum Uber found itself in when Lydia's Uber driver charged her for spilling Skittles in their car. And to their credit, Uber made a choice about who was right and who was wrong. But was it the right choice? Or was their process so ridiculous and over-blown it'll make you want to scream?

Driving Uber must be a tough gig.

The idea is so simple — drive your car all around, and stop every once in a while so a paying customer can hop in. But when you actually start driving for Uber, there are about 100,000 variables that can give drivers a headache.

Their pick-ups are always in weird spots.

No one is ever just where they're supposed to be. They're always across the street, or a couple blocks away, or on the other side of town, or on North Argon street when the driver is on south Argon street.

And you know riders be flirtin' in Ubers.

An especially big problem for women drivers, a lot of men hop in an Uber and start spitting game. And by "game," I mean "unnecessary and unwanted advances towards someone trying to do their job."

That said, not all Uber drivers are perfect.

While it is their car we're riding in, not all Uber drivers are the best hosts. They might take calls while you're in the car, play Christian radio, or even refuse to take the highway when the highway is clearly the best way to get downtown this time of day.

So managing a ride-sharing app is tricky.

When an app matches up strangers, there are always going to be disputes. The idea of working at Uber and being tasked with managing those disputes is enough to give even a zen master anxiety.

And since one of the main reasons anyone gets an Uber is if you drink too much to drive...

Without a doubt, Uber's most important role is in getting people home who have had too much to drink and would be a danger on the roads were they to drive themselves.

No good deed goes unpunished. Getting the inebriated home safe and sound comes at a cost, and that cost is getting throw-up in the cracks of their seats and under their floor mats.

So it's understandable that Uber would reserve the right to charge a cleaning fee.

Obviously the driver shouldn't have to pay to clean the wrench out of their car. That's why Uber is able to charge riders for any cleaning bills the driver may incur after the ride is over.

But there's no transparency.

Uber doesn't explain whytack it on when they charge you for your ride. The official Uber policy (by way of Ride Guru) says that "Riders are responsible for damage to the interior or exterior of a vehicle caused by incidents such as vomiting or food spills. Cleaning fees are assessed and charged according to the extent of damage."

That's the headache Lydia Williams is dealing with.

A UK woman, Lydia Williams, is in that unclear limbo right now after being charged a pretty crazy cleaning fee following an Uber ride after a night out with her boyfriend.

The couple caught an Uber home.

Lydia and her boyfriend called an Uber and got a ride home. On Twitter, Lydia even says she "brought the driver a meal and a drink" and that he was "very polite actually."

And she was eating Skittles.

Lydia was eating a bag of Skittles in the backseat. This could be what caused the driver to take a different view of his passengers — some Uber drivers are really fussy about eating in their cars. One time I was getting into an Uber with a cup of coffee and the guy yelled at me, "No coffee! No no no!" and drove away. It wasn't even very good coffee. I was going to throw it away as soon as I got to work.

Lydia's boyfriend knocked the Skittles out of her hand.

Maybe he was being playful, or maybe he was angry she wasn't sharing, but in any event, Lydia's boyfriend knocked the fruity candy out of her hand.

And they left the car full of Skittles.

When the two got home, they didn't clean up the Skittles, instead leaving the candy in the backseat. Admittedly, that's not the most considerate way to handle spilling candy in someone else's car.

Uber responded by levying a fee against Lydia.

The next day, Lydia found that her Uber cost her 80 dollars more than she thought it would've. When she looked into it, she found that they'd charged her a cleaning fee.

Officially, the fine was for £80, since Lydia is from the UK and that's the kind of money they use, but that's about 100 dollars American. And that... feels like a lot for some loose Skittles, right?

Lydia followed up with Uber, and they sent her a picture of the incident.

When an Uber driver files a claim for a cleaning fee, they have to provide photographic evidence of the mess. Presumably, Uber does this so they can respond to customers who dispute the fees. In this case, though, the picture makes the aggrieved customer's case for them — that is not a big mess.

Now, we need some other details. How long were the Skittles left in the car?

If the driver didn't notice the Skittles for a few days, and they left their car out in the heat, maybe the Skittles are melted into the car? That would at least make a 100 dollar cleaning fee make sense — that job would require a specialist.

And what kind of Skittles were they?

Are we talking original? Wild Berry? Tropical? Honestly, if they were Tropical, that driver should be paying Lydia 100 dollars, because having a car that smells like Tropical Skittles is the dream of every automobile owner.

Skittles themselves even hopped in to reframe the issue.

As a brand with a social media account, Skittles was required to hop in, and by suggesting Lydia was not leaving a mess for her driver but was instead leaving them a treat, showed they were firmly on her side.

Lydia seemed to take it in stride.

That's a lot of cry-laughing face emojis for someone who just lost 100 bucks over some nonsense.

But you know that inside, she was apoplectic.

We know this because, a) how could she not be, that is not 100 bucks worth of Skittles, and b) no one uses that many cry-laughing emojis if they're not suppressing some powerful rage. There's just no reason to ever actually be that happy.

The secret to using Uber is that, generally, they fold under pressure. Any dispute I've ever had with Uber, including one I pushed forward when that guy drove away form me because I had a cup of coffee, was immediately dismissed. When Lydia pushed back on the cleaning fee, she must've thought the same thing would happen.

But Uber decided the fee was correctly assessed.

The company said, "We've reviewed the incident and can confirm that the fee has been charged correctly." That means that Uber believes 100 dollars is a correct price for cleaning up about 20 Skittles.

That Uber driver's car must have gotten clean as hell.

The only way any sort of car-cleaner could justify charging that much is if they threw in more cleaning services. Did they get their seats turbo-scrubbed? Their windshield power-wiped? Their dashboard mega-dusted?

Lydia even asked for a receipt.

Remember, Uber drivers not only have to submit a picture to claim a cleaning reimbursement. They also have to turn over a receipt. Curious a to how someone could possibly charge 100 dollars to vacuum up a quarter of a bag of candy, Lydia asked if she could see it.

In its response to Lydia, Uber said they would not be turning over a copy of the receipt, because "it may have sensitive data on it related to the partner-driver, the professional cleaning services they frequent, and its location." It sounds like Uber wants to keep their hipster drivers' underground, exorbitantly expensive cleaning spots underground. If these cleaners blow up, you know they'll go commercial, man.

Now, leaving Skittles all over the place is a crummy thing to do.

Admittedly, Lydia should have cleaned up the Skittles right when they first spilled. That would have not only avoided this whole mess, but also, it would've been the right thing to do.

But maybe we need to decide how much cleaning up Skittles actually costs.

Because the only reason it should cost 100 dollars to vacuum up a few pieces of candy is if you hire Barack Obama to do it. (He is very busy and his time is valuable.)