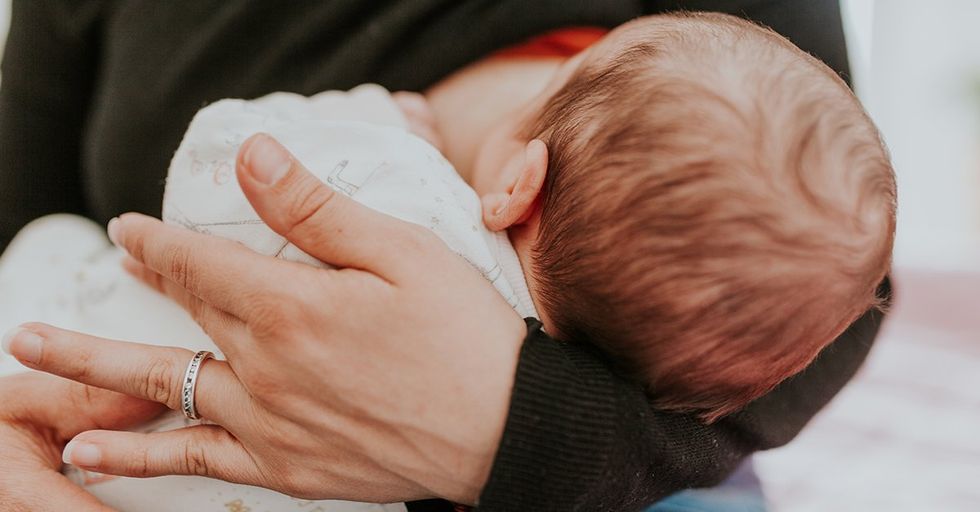 Many modern-day mothers have to work in order to provide for their family. And we live in a society where it is the norm to send your baby to daycare.

If you aren't lucky enough to have a family to care for your child(ren) during the hours you work, then you must send them to daycare. Finding a daycare you trust to care for your child is no easy feat. In fact, it can be excruciatingly hard. After all, most times, these workers are strangers to us. We don't learn who they are until time goes on.

The best thing you can do is ensure the daycare is licensed with the state, do some reference checks, and trust your gut. But sometimes even when you do all of that, issues can arise. In a live Q & A with Slate, a mom is speaking out about what she found her daycare provider doing when she left work early and stopped in unexpected.

A baby requires milk during their first year of life.

And when you have those first meet and greets with your new daycare provider, they will ask if you plan to feed your baby breastmilk or formula.

Can you imagine if your provider went against your wishes because she didn't agree with you?

This can happen and it did to an anonymous woman who is sharing her story to make others aware.

This mom states that she left work early one day and went to pick up her infant daughter from the home daycare.

And when she got there, she was utterly horrified by what she discovered.

The provider was breastfeeding her baby!

“When I got to the area of the house where my daughter was, I about fell over. The daycare provider was NURSING MY BABY!" she wrote to journalist Daniel Mallory Ortberg on February 19th.

And the daycare provider justified her actions and had no remorse.

The provider actually said that she was saving her baby from chemicals the mom was trying to force into her body and that she should "thank her for doing it all these months!"

The gall of this woman!

It is ethically wrong to go against another mother's wishes and don't you just wonder how many other babies she has done this to?

The single mom also noted that the daycare worker criticized her decision at an earlier time.

The mother, who adopted her daughter claims she had trouble lactating. And when she informed the daycare worker that she would formula-feed, the worker's response was, "You feed her that slop?"

It is uncertain if the mother will press charges.

I sure hope she does report her. This woman could be doing things against the backs of other parents and that is just morally wrong.

When working parents drop their kids off to daycare, there is an expectation the daycare will honor the parents' wishes.

Like feeding the baby breastmilk or formula. But also administering medicine they may need and making sure they aren't eating anything the parents say they are allergic to.

The reality is that when you send your kid to daycare, you can never be too sure just what is happening behind closed doors.

I guess this is a perfect example of why some parents pause at sending their kids to daycare.

But most of us don't have a choice. The cost of living is expensive and for many, that requires both parents to work outside of the home.

And in this situation, the mother is a single mom. Obviously, she has to work in order to provide for her and her daughter's livelihood.

The mother asked for advice on how to deal with this situation.

The Slate writer urged the mom to take action against the worker, suggesting that she report her and blast this story on social media.

The mom obviously removed her daughter from this daycare.

And she should warn all the other parents who go there what the provider did and may do with other babies under her care.

It is not uncommon for women to have trouble lactating.

Many new moms have issues with nursing and it can be painful if the baby doesn't latch on correctly.

Formula-feeding is the only other option if nursing doesn't work out for them.

And they should not feel guilty about that.

Some women have an excess supply of breastmilk, while others can barely get a few ounces out each time they pump.

And while it may seem odd to some, donating your breastmilk to another baby in need, is not all that uncommon.

In fact, there is an organization just for women who want to donate their breastmilk.

The Human Milk Bank Association of Northern America helps premature infants receive human breastmilk from donors all over the world.

The organization screens women who want to donate.

And they also require a blood test to be taken. This is an amazing way for women who do produce extra milk to help a sick infant in need.

Breastfeeding has natural antibodies that help a baby's immune system.

And studies have shown that breastfed babies tend to have fewer ear infections and allergies than formula-fed babies.

And not only that, breastmilk is easy for a baby to digest.

And a woman's breastmilk actually changes as her baby grows. Most doctors recommend new moms try to solely nurse for the first 6 months of a baby's life.

But not all women can, just like the mom in this story.

Roughly 80% of new moms nurse according to the March of Dimes site.

Some women nurse for only a few months, while others nurse for a couple of years.

And some decide not to nurse at all. Bottom line: do what is best for you and baby. Some women simply cannot get the supply they need for their baby and should not feel like their body is failing them.

No two women are alike.

Some moms easily produce that liquid gold and others freak out because they can barely squeeze out a couple of ounces at each pumping session.

Many find that they are always leaking.

Like when they are at the grocery store and hear another baby crying. The boobies just start dripping. Guess it is just how a woman's body is wired. Pretty incredible.

We should never let someone disregard our maternal compass.

Every mother knows what is best for her child. Motherhood is not a one size fits all.

To take another woman's baby and treat as her own, without her consent, is hurtful.

Even if the daycare worker in this story had good intentions, sneaking behind the mother's back is disgusting.

I hope this woman decides to come forward and the daycare is shut down.

Because if one devious act is committed, surely there are more.

As a mom who sends her kids to daycare, my heart goes out to this mom.

I also breastfed my daughters and always supplied breastmilk. And would've have been just as mortified if I learned they weren't giving my babies the milk I pumped.

It goes both ways. A mother's wishes should always be respected.

And if you cannot do that, then you should not run a daycare.

If you do send your kids to daycare, keep this story as a good reminder.

To pop in early every now and then to make sure things are always on the up and up.