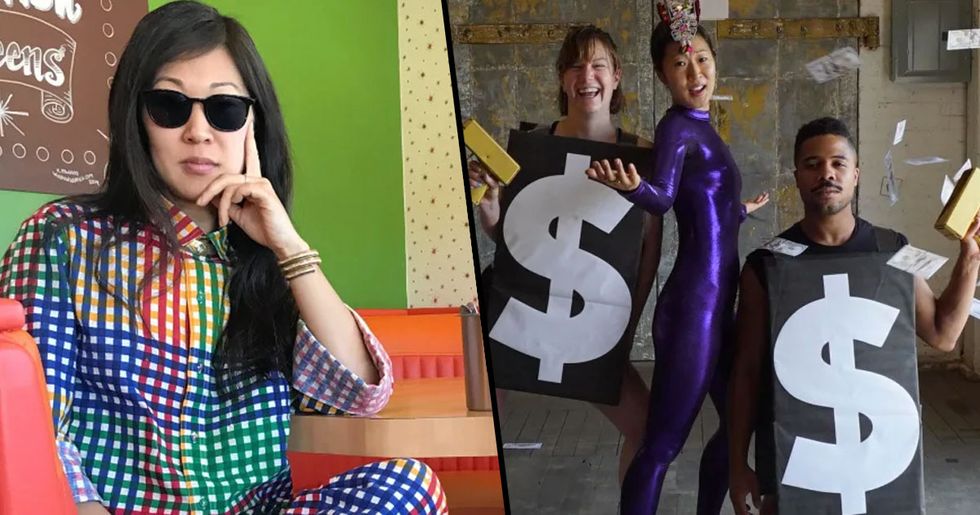 Millions of people around the world can totally relate to the pressures of repaying back those pesky student loans.

University is usually the best few years of a person's life, but the weight of the hundreds of thousands of dollars in debt is never fun. It can take years to pay off student loans, and the majority of people don't pay off the full thing until they're well into their middle ages.

But one woman from Brooklyn, NY, refused to become one of these people, and her methods of paying off her debts are incredible. Keep scrolling to learn how she conquered the iron fist of the student loan...

Hands up if you have student finance debt looming over your head right now...

I'm pretty sure that the majority of people reading this article will have their hands up right now.

Student debt is a sad reality of going to college...

And, despite the many years of partying and living your best life, those years must always come to an end and the harsh realities of working life will sink in.

Despite the majority of us holding the heavy weight of debt on our shoulders for many years to come, paying off a student loan can be done gradually over time so we don't all spiral into bankruptcy.

If having a ton of debt wasn't enough, the starting salaries for the majority of fresh graduates aren't that great at all, forcing post-graduates to work endlessly to make ends meet until they work their way up the financial ladder.

But when it comes to equality in pay...

It is a common known fact that it has been an ongoing issue for years that men have generally had higher salaries than women, even if they have the same position.

In recent years, people have been protesting for equal pay and their hard work has seemingly paid off, with millions of women around the world seeing an increase in their pay packets. But, sadly, this doesn't apply to every woman and some still find themselves working at a lower rate than their male peers.

Caitlin lives in Brooklyn, New York, and in 2009 she graduated after getting 2 undergraduate degrees in anthropology and American studies and a master's degree in social psychology.

But the thirty-five-year-old was left with crippling student debt, which added up to a total of $147,602.

But Caitlin managed to pay off her entire debt.

On August 6th of this year, which was also the date of her late father's birthday, she paid off the entire cost of her student debt, which had added up to $222,187 with interest. She announced this to the world via an extravagant Youtube video which showed her doing a celebratory dance wearing a metallic purple catsuit... as anyone would do once they've paid off their student debts, right?

She used the video to explain how she paid off the impossible amount of debt.

She begins the video with subtitles reading: "Hello friends and family who thought my degrees were worthless - as of today, I am officially student debt free!"

The journey wasn't easy, however...

Along with an interview with BuzzFeed News, Caitlin was honest about how hard it was to begin paying off this debt, especially when she was earning a low hourly wage - "in any given month, I had between $62 - $74 in my checking account," she recalled after revealing that she never received financial support from her family.

Speaking about her family to BuzzFeed, she said: "My family is super working-class. My dad was a police officer in Baltimore and my mom was a homemaker. I'm adopted. We never talked about the cost of college. There were periods when I was growing up when there were concerns for money, but my family never really spoke to me much about it."

Her family did their best for her...

Many students are unaware of how quickly the debt will build up.

"I one hundred percent wish I had learned about money in high school," Caitlin said,  "I wish I understood what debt meant. It was pretty bleak. I was applying for jobs everywhere... when I wasn't working, I was spending the better part of those first 6 months after graduating just trying to understand how much money I owed, where that money was, who I owed it to, and how to set up payment plans."

Hard work helped to move along the process of repaying her debts.

Caitlin spoke about how she rarely took time off work and how she never missed a payment, even after her father sadly passed away from suicide in 2013.

But the most important thing that helped Caitlin to pay it off?

She said that asking her peers if they were earning under or over a certain amount made her realize that she should be, and deserves to be, getting paid much more than the salary that she was stuck on.

Pushing past the stigma of salaries...

"Ask your other peers what they make - especially your male ones," she said. "It might make you feel uncomfortable but it's the sole reason I started making an additional forty-one-percent a year."

Caitlin landed a job that she loved.

"I got a job at a design agency. I ended up loving it. Almost 2 years into the job, I was making pretty high 5 figures, so not a small amount of money, but with that level of debt, it's still not really enough to be making a tonne of headway on what I still owed." In her biannual review, she plucked up the courage to boldly ask her boss for the pay rise that she deserves due to her hard work and commitment to the job.

Her boss said that "she wasn't ready for the raise..."

At a dinner with her co-workers that same evening, they all realized that they were each earning the same salary, despite many of them having years more experience under their belts. At work the next day, Caitlin decided to speak to one of her male co-workers. "I said 'hey, so what are you making?' He, being a normal American person, was like 'oh, I don't want to talk about money.'"

Caitlin had an idea...

She compromised with her colleague - instead, she gave him a number and asked him if he makes over or under that particular number. "I said a solid 6 figure number and he said 'under.' I went down by $10,000, and he said 'over.' And that was all I needed. I was like, well, there you go, I'm making at least $20,000 a year less than you. This co-worker had exactly the same job background, and the exact same degree, and similar time at the company as me."

She did her research and what she found angered her.

"I just went to LinkedIn and looked up everyone at every company in New York, LA, and San Fransico with my job title and seemingly with my background in terms of education and experience. I emailed a tonne of people... one guy's response was: 'If you have this amount of years of experience the industry minimum in a major job market is this.' Comfortably 6 figures, which was crazy."

Changes needed to be made.

"Even though I was super happy in my job," Caitlin went on to say, "I kept on thinking that if I'm literally being paid tens of thousands of dollars less than what I should be making, and I'm working this hard, I might as well be making the money that men in my industry are."

New job opportunities arose when Caitlin began standing for what she deserves.

"I got hired by Etsy. I told them what I wanted, and that was what happened," she said. "I got a pay jump of about forty-one-percent, so tens of thousands of dollars. These are not small numbers."

Her new job now pays her what she deserves to be paid due to her experience and qualifications.

This pay rise was the contributor that helped Caitlin to ultimately pay off her student loan, which led to her posting the video. "I wanted the video to be a genuine expression of joy and celebration that reflected that in spite of this debt that has taken so much out of me, spiritually, psychologically, and emotionally."

"I still ask the over/under question. I've also flat-out told my junior teammates what I make. I'm here to tell them what they should be shooting for. There's a burden that we carry by not sharing what we're making with each other." The stigma of salaries should not allow people to settle for less. It shouldn't matter what gender a person is when it comes to what they earn - experience, qualifications, and hard work should be the contributing factors to what a person gets paid. Don't be afraid to speak up for what you deserve! Interested to see how the gender pay gap affects those in Hollywood? Well, these are the twenty highest-paid actors in the world (note how the women are all at the top of the list, with the men earning the most money...).