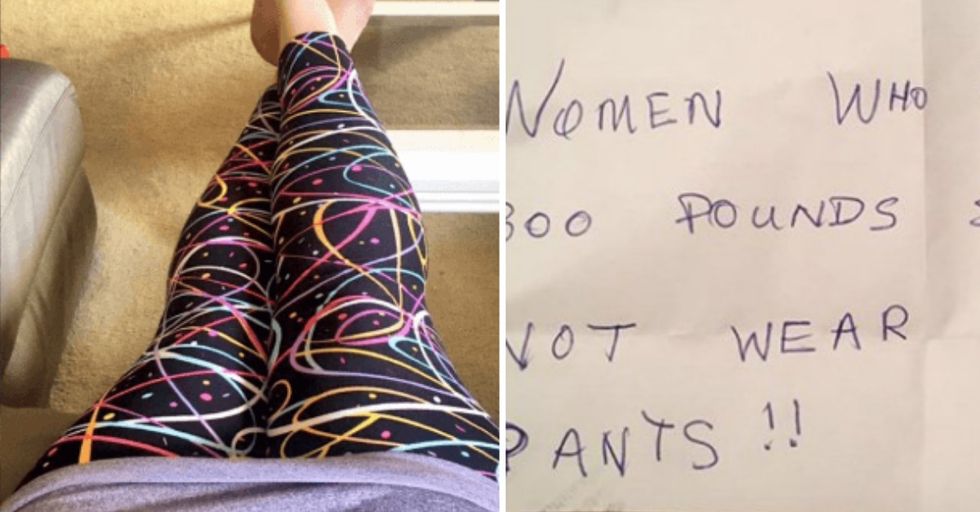 One would like to think that bullies grow out of their mean and immature ways, but as mom and substitute teacher Kelley Markland can tell you, people can be cruel at any age.

Markland recently received an anonymous letter in the mail mocking both her weight and her favorite wardrobe item — leggings.

There was also a printed-out meme that showed a heavy woman in leggings on the top and a picture of the character Ron Burgandy on the bottom with the quote: “Your pants say yoga but your ass says McDonalds."

So, just to quickly recap — someone out there took the time to put this little envelope of hate together and mail it to a stranger just to make her feel like crap. Yay humanity!

The post yielded overwhelming support from friends and loved ones, many who expressed anger toward the anonymous “coward" who mailed her the nasty note.

And while humiliated and hurt, she decided to follow through with the message she often tells her students and her own children: Don’t let the bullies win.

“I had to remember, if I walked around defeated and scared, then whoever sent that letter wins. And I wasn’t going to let that person win. At all," she said.

The next day, although nervous getting dressed for work, she put on a pair of leggings and went to the school where she subbed only to find a great surprise...

Most of the other teachers — and even some of the moms — were also wearing leggings to show their support for her.

“All the teachers were coming up and hugging me and showing me their leggings," Markland said. “So I knew at that point, it’s not about me anymore, it’s about all women."

Markland said leggings only recently became her go-to item after spending years of trying to hide her curves behind black and dark gray clothing.

“As a plus-sized woman, your options are limited," she said. "I got compliments on my leggings and started feeling better in what I was wearing. The more I wore them, the more I wanted to keep wearing them because I felt pretty and good in them. I’m happy I finally have the confidence to wear something that isn’t solid black."

Markland said she's amazed at the response, but still disturbed that someone would take the time to look up her address and mail her such a hateful note. But a small part of her actually wants to thank the individual.

"Only because they started a positive movement by sending me that letter," she said. "Their intention was for me to feel bad and stop wearing leggings. Instead, women all over will gain more confidence."

"I knew I can’t hide and act scared because people were counting on me to keep wearing leggings and help them be comfortable with themselves," Markland said.

"I wanted to help people feel confident, regardless of what they wear." And if the response is any indication, mission accomplished.