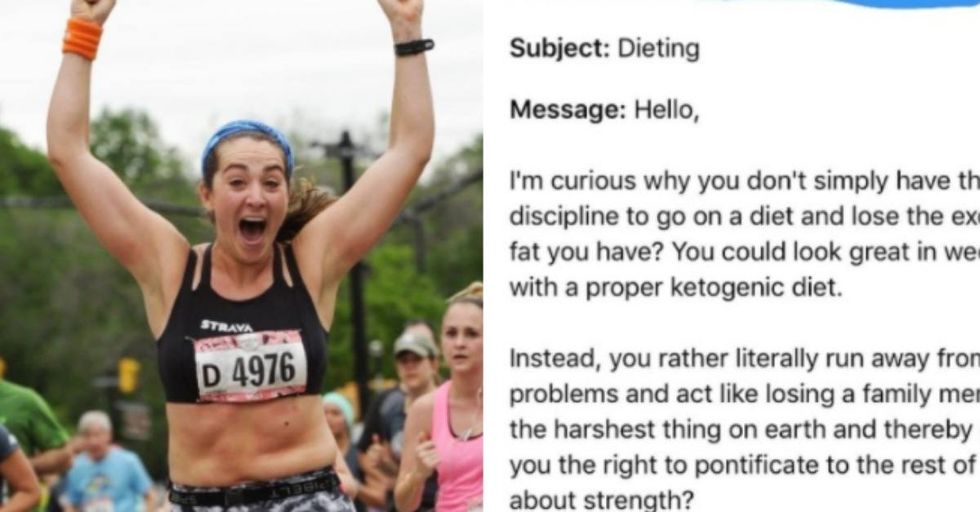 "Fitness bloggers" have been all the rage on Instagram the last year or two, but one woman has separated herself from the pack.

Kelly Roberts is a fitness blogger and Instagram star who manages Run, Selfie, Repeat and founded the #SportsBraSquad movement, which empowers women to exercise shirtless no matter their body type.

This means she has absolutely no patience for those who think it's OK to shame her for wearing a sports bra while running, and she'll call you out and lay the smackdown on you if you try.

Her recent run-in with a body shaming guy proves men are gross and Roberts is one strong woman.

Kelly Roberts wasn't always throwing her hands up in triumph at the finish line of marathons.

Her Instagram bio describes her as the "Former President of the 'I F*cking Hate Running Club.'"

Recently, she has been championing for the #BadAssLadyGang5K run.

And Kelly is one badass lady, for sure. But it hasn't always been easy for her.

Kelly is open about the fact that after her brother passed away suddenly, she gained over 75 pounds but eventually found the strength to work to get her life back.

Now, Kelly is happy, healthy, and absolutely killing it. She's a body positive advocate and fitness fanatic, and when she posted this inspiring picture, the Internet quickly reacted.

The majority of responses were positive.

Even though most people were supportive, there were definitely some "jerks" who tried to shame Roberts for her wardrobe choices.

Speaking with POPSUGAR, Roberts said, "Every week I field comments and emails from men (always men) shaming me or policing my weight. If you could see my inbox and some of the emails I get, you'd want to light things on fire."

What is it about men?

While women are praising and thanking Roberts for her message, men are over there thinking they have some sort of claim over women's bodies and the right to tell them how they should look.

Why? Maybe it's hundreds of years of internalized misogyny and outward sexism. Maybe it's because women's bodies are constantly sexualized without their consent.

Whatever the reason, it's so incredibly wrong there are no words for how wrong it is.

Get ready to see red. Roberts posted one of many ridiculously awful messages she's received and clapped back with an awesome response.

She's much more composed and eloquent in her response than she had to be. "I hope one day you can obtain the strength I've worked tirelessly for," Roberts wrote. "Until then, know that I will spend the rest of my life empowering the women you hope to shame. You will lose. You already are." Hell yes. That is one badass woman.

The comments reflect the praise Roberts deserves for her empowering line of work.

It's clear that no body-shaming coward is going to bring Roberts down, but the fact that she — and basically every single woman in the public eye — regularly have to deal with these ugly trolls is beyond infuriating.

No matter how strong you are, these comments are unacceptable on every level.

Yes. That's what this guy is. A total "turd." "It always hurts when someone says something hurtful to you," Roberts told Scary Mommy.

"But it makes me feel so sad that these people who email me have such a negative view of strength. I can't help but think about the horrible things they probably say to themselves."

The fact that she's able to be somewhat sympathetic to these monsters just speaks to her sense of empathy and the idea that she's been unhappy with herself before.

But in spite of the trolls, Roberts is stronger than ever and not planning on giving in to negativity anytime soon.

Strength and health have nothing to do with what the scale says or what you look like. "I don't look like a fitness model," Roberts told Scary Mommy, "but neither do most of the strongest women I know."

"But if any of these guys ever wanted proof, I'd be happy to kick their a** during a marathon."