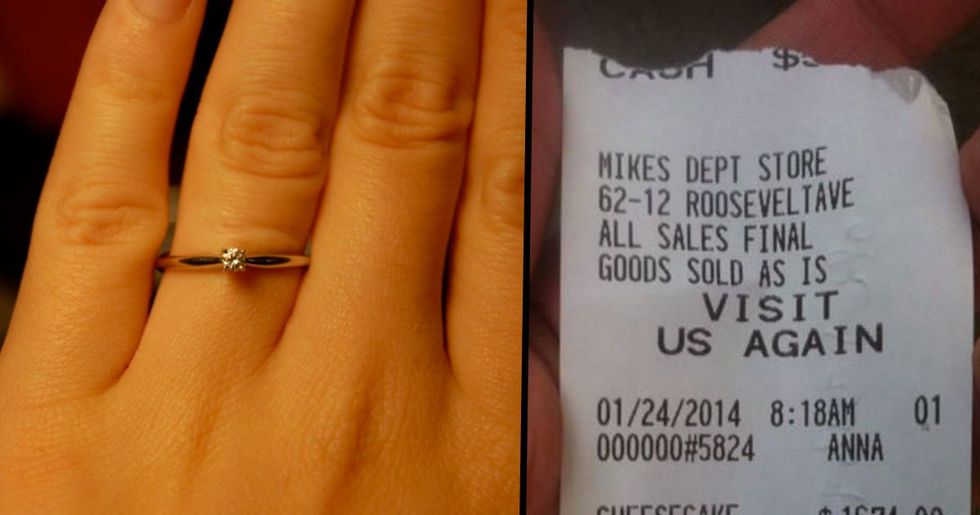 For many women, the engagement story is almost as important as the wedding. The desire for fireworks and romance can be intense. And the aspect of an engagement that's most important? Why, it is, of course, the ring.

But one woman found herself feeling a little short-changed after being proposed to. So short-changed, in fact, that she took to the internet to complain about the situation. And the responses that she received are probably not what she was hoping for.

A wedding day can be the most special day in a person's life.

And, for a lot of women, their romantic story has been planned out in their heads from childhood - which gives real-life a lot to live up to!

But, before a wedding, comes something else.

That all-important proposal. And, for the wedding-obsessed amongst us, the proposal can set the tone for the entire marriage - meaning it better be good.

There are lots of factors to consider.

But, among the most important decisions that any groom-to-be has to make? It is, of course, the chosen engagement ring.

It's basically the first thing that people want to know about.

So choosing a ring with the wow-factor may be the key to a happy and excited fiancee.

And there's one thing that makes all the difference.

For women who are really into the idea of a romantic proposal, it's the diamond in the engagement ring that really matters.

But one woman has gone viral this week for her ring-related story.

And, unfortunately, it's not a particularly happy one. In fact, she took to the internet to discuss a rather controversial ring issue.

The anonymous woman was asked the question that she was dreaming of by the man of her dreams.

But there was one caveat to this happy story. The woman was not pleased about the ring her that hubby-to-be had chosen to propose with.

The ring was a little understated.

But, even worse (in her eyes), was the supposedly diminutive price tag.

Never mind the fact that she'd been asked to get married.

And that she supposedly feels deeply in love with her partner. It was the material possession that she was worried about.

And, unable to contain her disappointment ...

The woman had to vent online about her sad, sad situation. She took to Mumsnet (of course) to voice her concerns.

She ranted about the ring in her brutal post.

"I was so happy and excited to accept but disappointed when I first saw the ring. The first word that entered my head was 'small.'"

That wasn't even her only issue.

She also took issue with the ring's appearance. "There’s nothing to dislike about the type of ring per se, as a diamond solitaire would have been my choice, but it’s the whole thing – the colour of the gold, the setting, the small stone and relatively chunky shoulders."

She was also irritated that there was no excuse for the petit ring.

"His salary is nearing a 6 figure sum, and he’s usually very generous. Having seen the receipt I know he paid $1,674 for it – which is a lot less than I would have imagined he would have spent on such a significant piece of jewelry."

She's concerned about how her fiance will react to her disappointment.

"He’ll be more disappointed in me for making a fuss over it when, in his eyes, it fits, and there’s nothing actually wrong with it rather than being disappointed that I’m not truly happy with it. Someone at work apparently told him 'if she makes it all about the ring, she's not the girl for you. Ideally I would have loved for us to have chosen a ring together and made a special day finding one we both liked."

Which leaves her in something of a conundrum.

She ended her post with a plea for help. "Has anyone else been in this situation? What did you do?"

But the comments that she received were probably not what she expected.

In fact, people almost universally declared the woman greedy, shallow, and gold-digging, and stood firmly on the side of her frugal fiance.

Many took this view.

The fact the woman was placing such importance on the material item of the ring suggested that she didn't really understand what makes a successful marriage.

Sure, if her fiance is making six figures, the ring is affordable - but, for many, that's a super high price tag. Plus, there are far better things for a newly engaged couple to be spending money on.

And many had other suspicions.

For example, the fact that the guy bought such an understated ring could well have been a way to check that the marriage was set to be a happy (and a genuine) one.

But there was one overriding message throughout.

You can't put a price tag on love and a happy marriage. And thinking in terms of dollars and cents at this early stage is clearly a warning sign. For more eye-rolling engagement ring content, read on.