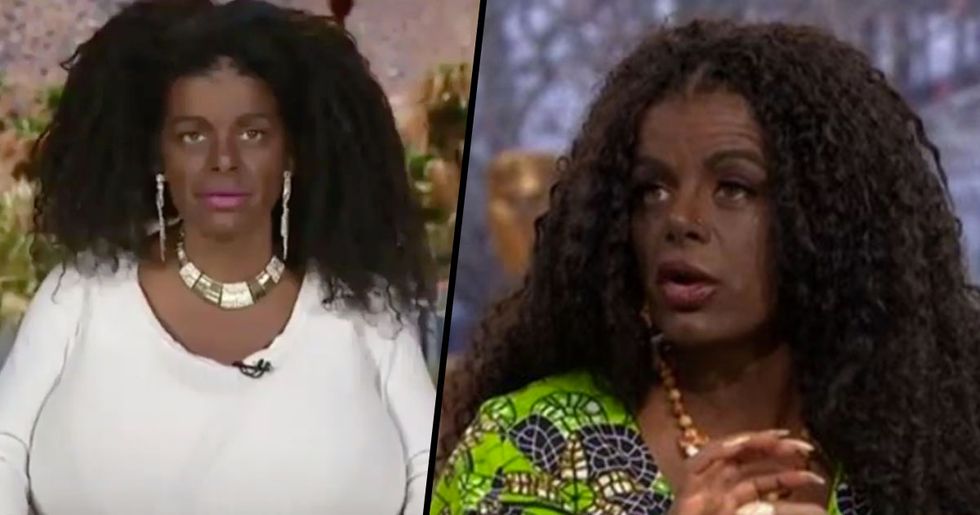 The world is a crazy place and life is indeed stranger than fiction.

There is a woman in the world called Martina Big. She has undergone over 20 cosmetic surgeries to vastly alter her own physical appearance. She believes that the change to her physical appearance has also altered her internal character.

In fact, Martina believes that she is now black and belongs with different 'people'. She might feel like she fits in best with people somewhere in Africa, but we have a different idea of the people she would best fit in with.

Sometimes it can feel like we are all the same.

These days most people we know live a fairly homogenous life. We get up, go to work, come back and watch Netflix. Meanwhile, it seems like we spend our days glued to our phones and sharing identical photos on social media. Individuality can feel like a distant dream.

But fear not, some people are still standing out from the crowd.

In a world of sheep, it can be exciting to see an octopus. But are some people too different? Do they embrace their individuality too much? It seems that some people have the classic problem of taking things too far.

Meet the man who believes that he is the real pope.

David Bawden, from Kansas, believes that all popes since 1958 have been modernists and heretics. Instead, he believes that he himself is the rightful pope. He was elected as pope in 1990 by six people, including his parents and himself. On top of that he reckons he has a solid thirty followers. Sounds legit.

Gino Martino is a wrestler and world record holder. His speciality is breaking various hard or heavy objects over his head. What he has 'achieved' is incredible. He has had 16lb bowling balls dropped continuously on his head from a height of 15 ft., for over 3 minutes. On another occasion he had 15 concrete slabs dropped 3 times onto his head. This meant his head received a combined weight of 1125 lbs. But don’t try this at home folks. His skull has been measured and is 2.3 times thicker than the average human skull.

Then there is the girl who wants to pretend that she is Victorian.

Michele Kobke is a young German girl in her twenties. In many ways she seems like a normal girl, but she wore a corset for over three years. It changed her body shape and made her waist nine inches smaller. It is now around the size of a rolled up yoga mat. Again, this is not good for your health. Although it can change your waist so that it appears narrower, it can also cause damage to your internal organs. She also has welts all over her waist and struggles to breathe. This is one of those times where you have to decide; not worth it.

Wim Hof is an extreme athlete who spends an oddly long time sat in baths of ice. He has broken his endurance record a number of times. His current record for being immersed in an ice bath stands at 1 hour 52 minutes. He believes that being in icy conditions bring numerous health benefits. He puts it down to his breathing techniques. However you have to be careful. A number of people have died trying to achieve his technique. Personally I might try the breathing techniques on the sofa under a warm blanket instead.

There is a real life Hulk.

Much like Eric Bana, science let down Romario Dos Santos Alvos. He wanted to be big, like a body-builder, but without doing the work it takes to get there. Instead he injected Synthol, a mixture of alcohol, lidocaine and oil. He became addicted, did it every day, and his arms became so big they were like rocks. Despite the enormity of his arms, and the constant pain, he didn't stop injecting until he almost had to get them amputated.

And now there is a new kid on the block.

Martina Big is the white, blonde, German woman who has taken plastic surgery to a new level. She began life as an air hostess, but she and her husband decided that she would be better suited as a glamour model.

It's not all natural for Martina.

Martina has had over 23 procedures in total. She has had plastic surgery on her waist, legs, lips, nose and teeth. And she still wants more. This is not where her surgery tales end. In particular, she is interested in increasing the size of her ass, so it matches her breasts.

There are a couple of very noticeable changes.

It could be argued that Martina's most obvious change is her breast implants. She is now a size 32S. Her new breasts weigh a total of 12kg. She claims that they are the biggest in Europe.

It is hard to argue with this.

At a size 32S it is hard to deny that they are the biggest breasts in Europe. They are certainly an unnaturally large size. She had wanted to try to balance it out by getting equally large butt implants, but luckily doctors were at hand to dissuade her. Where were they for her other decisions?

They are even bigger than Dolly's.

Dolly Parton is a very petite lady with large breasts, and an ever larger voice. She is a country music star and known for busty look. However, at a size of 40DD, even she cannot compete with Martina's new boobs.

She is not the first person to seek fame through plastic surgery.

Lolo Ferrari had 22 enlargements of her breasts through plastic surgery, ultimately achieving size 36T. This meant that, until her untimely and unfortunate death in 2000, she held the crown for Europe's largest breasts. Apparently her implants were designed by an engineer who helped design the Boeing 747. I'm not sure that sounds like a medical professional.

Then there is the human Ken.

Rodrigo Alves has had more than fifty surgeries and spent more than £500,000 to achieve his current look. And that is all within just four years. He has used his new found fame to take part in Celebrity Big Brother, and he is hoping to make it to Eurovision too.

And there's the other human Ken.

For some reason, this plastic toy seems to be the target look for plastic-surgery addicts. Justin Jedilica from New York is also known as the human Ken. He is from New York and has had a whopping 300 procedures. While he does look a bit like Ken, the more important question is why does he want to look like a child's toy?

Then there is the woman who wants to look like Jessica Rabbit.

That's right, Pixee Fox is aiming to look like a 2-D cartoon character. Sure Jessica Rabbit is a sexy cartoon, but there is a reason why her beauty is unattainable: she is a fictional drawing. Pixee Fox even had six ribs removed to try to make her waist smaller. Sometimes the world is an ugly place.

Bryan Ray has spent more than $80,000 on plastic surgery to make him look more like his idol, Britney Spears. In some pictures it looks like he hasn't done a bad job with this target. On the other hand, it seems odd to fork out thousands of dollars on making you look like someone else.

But there is another change that Martina Big has made which just might make her the most radical of all.

Martina has undergone surgery which she believes has changed her race. She has had surgery to darken her skin and now believes that she is African.

Is this even possible?

In short, no. No it is not possible for a woman to change her race by getting darker skin. If that were the case, we would all be changing race as we move through the different seasons and our skin tones change.

She has not changed race.

A person's race has roots in their ancestry and heritage. It is influenced by a shared culture and a lived experience. It is not just about the colour of someone's skin. It is about much more than that.

Why does she think she is now black?

Martina and her husband have both received Melanin injections to darken their skin colour. However, she claims that there is more to it than just injections. She even goes so far as to claim that she has had a top secret surgery that is in early stages so she can't talk about it.

She seems sort of vague on what she actually is.

Martina has decided that she needs to 'be with her people.'

Africa should not be used as a generic term to hide ignorance.

Saying that she feels African shows how little she knows about what she proclaims is her culture. Africa is made up of 54 recognised states. There are over 1,000 languages spoken across the continent and over 3,000 different ethnic groups. Using injections to change the colour of her skin does not give her their heritage.

She has decided that Kenya is the place for her.

Martina spent seven weeks in Kenya last year. She declared that she 'felt so at home,' as if this is enough proof that she is now of a different race. She even used the line 'I have made lots of African friends.' We all know who would say something like that to back up their point.

She even got baptised with a Swahili name.

A Kenyan pastor invited Martina to his church and baptised her with a new Swahili name; Malaika Kubwa. She actually thinks this proves that she is 'a true African woman.' That is not how it works.

She has made some terrible comments in the past.

There are a lot of quotes from Martina's past that are enough to make you shudder (at least). In the past she actually described herself as being 'crispy brown.' English is not her first language, so maybe we could make some allowances. However, she claims the reason she doesn't use that word now is that she has become more sensitive. So it looks like her problem before wasn't to do with language, but about being an ignorant white woman.

She also said that her children will be 'black, or milk chocolate.'

Yep, the classic races that you can be. She has also asked people not to 'tell scary tales that my future children will be white.' She's right. It would be absurd for people to suggest that a white couple would produce white children.

At least she is learning.

Ok, so she has made a lot of comments that are racist, but it is good that she is admitting her past mistakes. And it is nice that she wants to learn about various African cultures, even if she seems to think they are all the same. Wanting to learn more about different people is always a good thing, even if you think you are the same.

If we were all the same, life would be very dull.

The changes that Martina has gone through are radically over-whelming. She does indeed look like a very different person to the one that she started as. In fact it is easy to see why she no longer associates with who she used to be. That doesn't mean that she is now a different race, but maybe 'Africa' would provide her with the fresh start that she seems to crave. For now we can all just take a moment to appreciate how relatively comfortable we all feel in our skin in comparison. Sometimes it feels nice to be you, doesn't it?