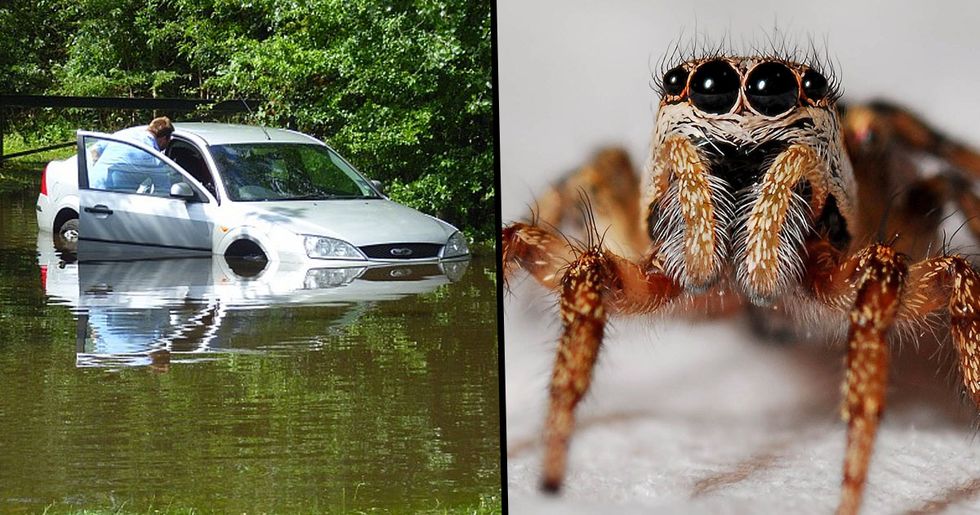 We all have a phobia in some shape or form. Whether it be a fear of heights, a slightly irrational anxiety over a trip to the dentist, or simply having your foot stuck out of the covers at night, there's something to scare everyone.

Perhaps the most common phobia is that of our 8-legged arachnid friends: spiders. Although the creepy crawlies do a lot more good than harm, they still remain one of the most universally feared insects. More commonly known as arachnophobia, this popular fear can drive people to extreme lengths to avoid them...

And we think that this woman takes the crown for the most extreme move yet...

The incident happened in Georgia, while the unnamed woman was reportedly backing her Kia van down a boat launch in attempt to drop her kayak in the river. A seemingly smooth procedure, I know...

However, disaster struck when she spotted a critter crawl into her lap.

While backing the van down the boat launch, the woman noticed the spider crawl into her lap - which is undeniably an unbearable situation for any driver. Although there are no details as to what type of spider it was, I doubt that it was as cute and cuddly as this little guy.

Now for the question of fight or flight...

The spider's sudden appearance understandably spooked the woman, who, instead of stopping the van and getting out with caution, proceeded to leap out of the still-moving vehicle. Quite a reasonable response, if you ask me.

The woman was then forced to watch her van disappear into the river.

Once safely on land, and, most importantly, nowhere near a spider, the woman saw her vehicle roll back into the nearby Etowah River. This river has a waterway that's around 164 miles long, so, although she escaped unscathed, her van certainly didn't stand a chance.

The police were then called in to assess the situation.

Georgia State Police ended up sending one of their state troopers to help to salvage the swept-up vehicle. However, by the time that they had reached the scene, which was all the way out in the western part of Bartow County, the van was long gone.

Whether the sunken vehicle can be found again still remains uncertain...

The woman's insurance company may pay for divers to locate the submerged van to evaluate whether or not it can be saved. Georgia State Patrol Police claimed that "a passerby in a boat attempted to locate the van, but without any success. It was totally submerged."  Not looking great, then...

Now, I'm no expert on salvaging sunken vehicles, but I'm not feeling too confident on the likelihood of this van being found again, or in one piece, at least.

Most importantly... did the spider make it out alive?!

The question on everyone's minds right now will undoubtedly be on the poor spider's fate. Although the type of spider that it was is unclear, there is evidence to show that several different species of spider can, in fact, swim. Bad news for some, I know.

It seems like years of being flushed down the toilet has paid off.

With the old "toilet flush" being one of the nation's favorite ways of getting rid of spiders, I would like to think that spiders have had enough practice in water to safely get themselves out of situations like this one.

By some miracle, no one was seriously hurt in this bizarre situation.

For future reference, however, if your fear of spiders is great enough to sink your van into a river, maybe it'd be best to catch the bus...