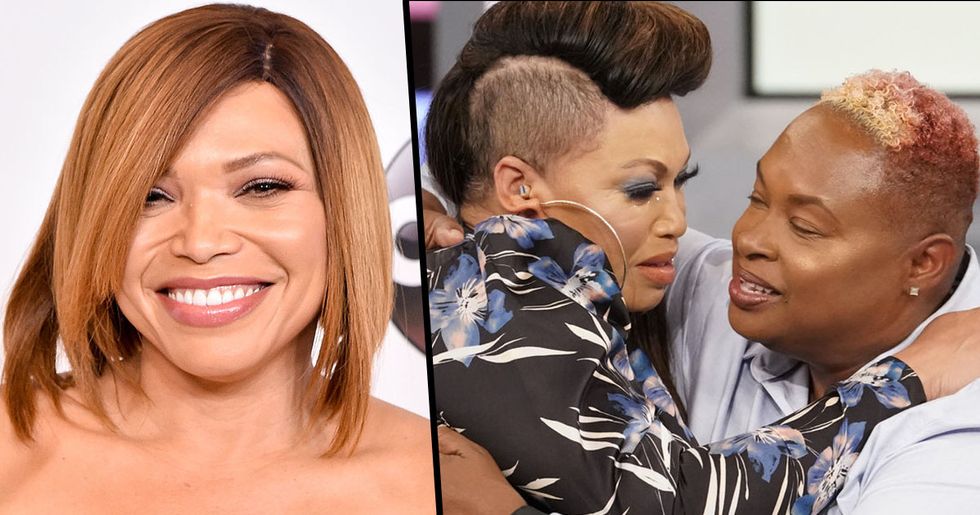 For the thousands of people who have been adopted or ended up in the care system, it's pretty common for them to try and find their birth family. Whether it's a parent, cousin, or siblings, finding that piece of the past can bring closure and a sense of belonging for many.

But can you imagine if your long-lost relative was a celebrity? Well, for one woman, this became the reality when she was invited on The Real to connect with her estranged sister. But, she had the shock of her life when it was revealed, in front of a studio audience, that her half-sister was no other than guest host, Tisha Campbell-Martin.

Keep scrolling to watch the moment the big news was revealed.

Many people who have been adopted wish to connect with their biological family.

For many, knowing where they came from can offer a sense of closure and belonging.

The search can be extensive and many aren't successful in their pursuit.

But for those that are lucky to reunite with a blood-related family member, the emotions must be impossible to explain.

But can you imagine finding out your estranged sibling is a celebrity?

Well, that's exactly what happened to Ellen Lindsey, who learned on national TV that she was related to a very famous face.

Lindsey appeared on the popular talk show, The Real, to connect with her blood relative.

After learning she was adopted just a year ago through a DNA test, she was invited on the show along with investigative genealogist, Pam Slaton, to piece together her past.

Many people turn to national TV to reunite with long lost siblings - take shows like Jerry Springer, for example.

Lindsey was told she would be coming face to face with a "blood relative" while on The Real.

The 50-year-old didn't know an awful lot about what she was getting herself into, other than she would be meeting “someone from [her] past."

But she got the shock of her life when it turned out her half-sister was Tisha Campbell-Martin.

We can imagine what must have been going through Lindsey's head when she was told. Keep scrolling to see the heartwarming clip.

The star is best known for her roles in My Wife and Kids and Martin.

Before entering the public gaze, Campbell-Martin also appeared in several of Will Smith's music videos.

She was actually watching her half-sister on screen.

Kicking off the reunion segment of The Real, Campbell-Martin kept the big reveal very under wraps...

Then, Campbell-Martin dropped the bombshell...

“I know what I would tell my sister: I hope you like me. I’m your sister."

Lindsey was in an understandable state of shock...

The pair then shared a long, tearful embrace, while host, Loni Love, jokingly chimed in: "All this time, you been watching Martin and that’s been your sister!"

Later in the show, we got a more detailed look at Lindsey's family history.

And it turns out Lindsey's siblings had been looking for her all this time.

But the pair had different mothers, with Lindsey’s mother putting her up for adoption.

Lindsey also has a full brother named Duane, who also joined the two on the show.

He had apparently been searching for her for years, and was the sibling who spearheaded the search for her, TooFab reports.

"Duane is first born. Then my mother got pregnant with me and he married my mother," explained Tisha. "Then you came and Laverne never wanted to give you up for adoption. She cries on your birthday every single year. You look exactly like your birth mother."

Lindsey finally got the answers about why she was given up for adoption.

"She knew she couldn't give you the life with just being a single mom that she really wanted to give you and she had to give you up for adoption," Campbell-Martin explained. "And before she passed away, we wanted to find you so that you guys could meet and he's been searching since he was 18 years old for his sister."

The My Wife and Kids star explained that the search was tough.

As the adoption agency that organized the adoption and the hospital where she was born didn't exist anymore, the siblings kept hitting dead ends. She also added she didn't learn about her half-sister until she was thirty-three.

She then asked Lindsey what her life has been like.

"My dad's deceased. My mom is 90 now, she did an excellent job raising me," Lindsey said. "I went to college. I'm her only child, I'm spoiled."

Watch the shocking moment below:

It certainly was an unexpected turn of events. Speaking of reunions, keep scrolling to read the heartwarming story of a doggo who waited in the same spot for 4 years before being reunited with his owners.