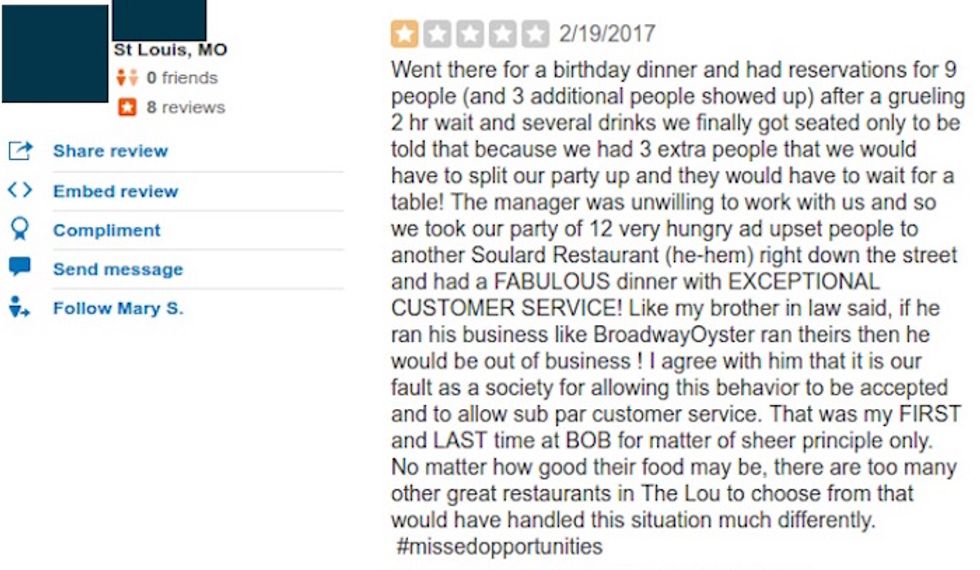 Buckle up, because this one is a doozy.

A user on Reddit discovered a rare exchange on the Yelp page of Broadway Oyster Bar in St. Louis, Missouri, where a woman was not happy with the way she was treated during a recent birthday dinner.

In the one-star review, the woman alleges she had a 9-person reservation (except really 12 because 3 more people showed up) but still had to wait two hours to be seated. On top of that, she claims the manager was "unwilling to work" with her on figuring out a solution and ended up going to another restaurant all together.

She also noted "it is our fault as a society for allowing this behavior to be accepted", and attempted to make the manager regret their alleged actions by ending the furious review with the hashtag, "#missedopportunities".

Think that was bad?

Surprise - we're just getting started! The owner responded to the woman, and he was NOT happy about her "alternative facts", and even used CAPS LOCK to express his anger.

The customer went back and updated her review in response to the response from the owner — and yes, she's still mad.

Users on Reddit seemed to side with the owner as well, with one person writing, "Have been to Broadway Oyster Bar. Can confirm they do not do reservations. The place is always busy, you can call ahead for preferred seating (you get bumped to the top of the wait list) but that's it... The staff was friendly, the food was amazing, and this reviewer sounds like a pissed off kid who didn't get their way and threw a tantrum." Despite her bad review, it seems like Broadway Oyster Bar is doing just fine - they still have a four and a half star rating.