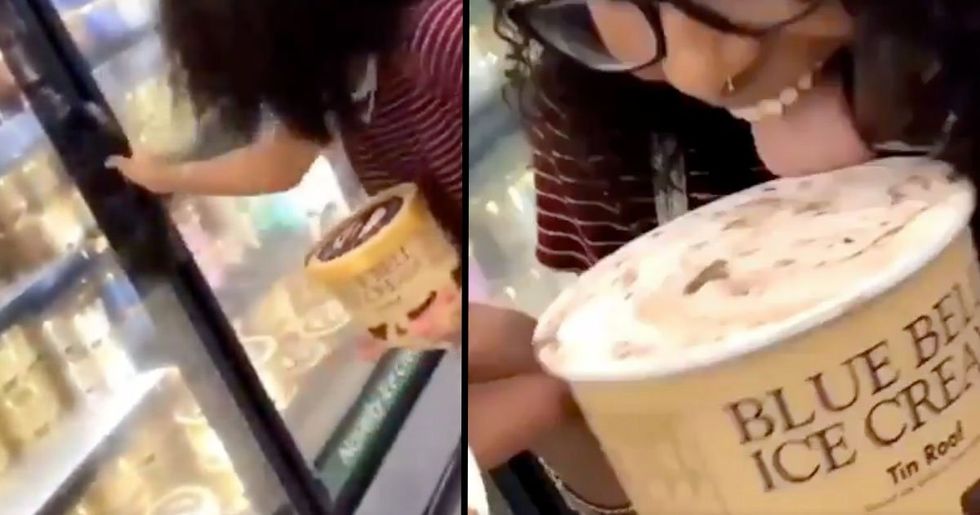 But, it seems like one woman may have just ruined this for everyone after a video has surfaced of her licking a tub of ice cream, putting it back into the supermarket freezer.

Well, she seems to have landed herself in some serious trouble after the ice cream brand in question has spoken out about the issue, and let's just say, they aren't happy.

Oh, and, of course, numerous grossed-out viewers have been responding to the video, and they're suitably disgusted.

Read on to see exactly what the woman did and what may happen to her now (spoiler alert - she could face quite the hefty punishment).

It's now sold in several supermarkets across the states.

But, when one woman came across the Bluebell ice cream section in her supermarket, she did something, well, gross...

In a clip posted to Twitter, the young woman can be seen licking a tub of the frozen dessert.

But it gets even worse... she puts the ice cream back in the freezer, while an off-camera voice can be heard saying "lick it" followed by "put it back, put it back." It seems like she got some friendly encouragement to pull the stunt.

Since being uploaded, it's absolutely snowballed - hitting over eleven million views. Read on to watch the full video - you won't believe how nasty it is...

And guess who has happened to see it?

People began tagging and tweeting the brand after seeing the video. And it seems like the company is certainly not amused by the woman's ice cream-related antics.

The dessert franchise is now taking drastic action against the woman.

It looks like the BlueBell is taking the "food tampering" case very seriously, as the brand is said to be working with police to try to find the woman in question.

The brand also released a statement on its website.

But, there's been a development in the sugary saga.

Though the identity of the culprit is yet to be revealed, this man has reportedly come forward, admitting to being the one who filmed the video, though it's unclear whether this is true or not.

Though we have no idea how this guy got hold of the footage, he certainly mirrored what people were thinking with his "psychopath" comment.

As of yet, we don't know which supermarket the clip was filmed in.

Police are still said to be looking into it, although, we're sure that Twitter is conducting an investigation of its own.

Since the video graced the platform, it's been met with outrage.

But others were quick to notice something unusual about the video.

In fact, some people are going as far as boycotting the brand until they alter their packaging.

@ILoveBlueBell While I always knew something like this was possible, now that the video exists we are done buying B… https://t.co/TRbvEL6CNC
— Jason Kurth (@Jason Kurth)1562080259.0

People started turning on the brand, with this user claiming that they were "inviting idiots" to pull stunts like this.

But the dessert company was quick to reassure people.

According to the franchise, the containers of ice cream are flipped upside down during production and sent to a hardening room “where the ice cream freezes to the lid creating a natural seal." “The lids are frozen tightly to the carton. Any attempt at opening the product should be noticeable," the franchise added.

However, the joke may very well be over.

The police think that they have the original woman identified.

The authorities have gotten hold of footage from a Walmart store which shows a figure that appears to be the suspect.

Although we still don't know who the woman is, police say that they think they have her identified after obtaining surveillance footage from a Walmart store in Lufkin.

And her prospects are not looking good...

Police confirmed that she could face a second-degree felony charge of tampering with a consumer product.

Turns out, that's quite a hefty punishment.

The charge carries a two twenty-year prison term and up to $10,000 in fines, according to the Texas state penal code.

Investigators are also said to be liaising with the FDA, meaning additional federal charges could be made.

Lufkin Police & Fire posted a lengthy update on Facebook on Wednesday. In the meantime, the "Tin Roof" Bluebell ice cream has been pulled from the shelves of the Lufkin Walmart store - so fans of the limited edition flavor will have to sit tight and wait for this to blow over before getting their ice cream fix again.