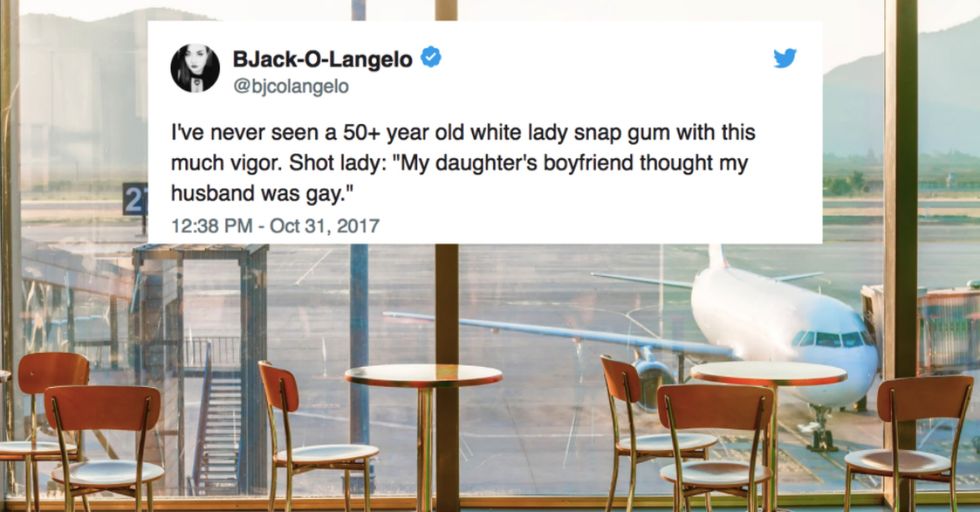 Have you watched the Netflix show Grace and Frankie, starring Jane Fonda and Lily Tomlin? Well, you should, because apparently, this real life story is based on that show. No, not the other way around. The show centers around Fonda and Tomlin — Grace and Frankie — who move in together after learning that their husbands, who've been business partners for years, were actually gay and in love with each other. It's hilarious and heartwarming and everything in between.

Life is now imitating art, and we got to witness the whole thing thanks to one Twitter user. This woman documented a conversation she overheard in an airport between two women who were meeting for the first time to go catch their husbands, who they believed were sleeping together. Shockingly, this has nothing to do with the show. It's just happenstance!

It's actually incredible — these women prove themselves to be such rich, strong characters, and while it's a tough story, it's also a testament to the resilience and strength of women as they bond together.

Filmmaker and writer BJ Colangelo struck gold when she sat down at the airport bar to wait for her flight.

There are two women next to me at the airport bar who are flying cross-country to ambush their husbands they think are sleeping together.
— BJ Colangelo (@BJ Colangelo)1509477842.0

"There are two women next to me at the airport bar who are flying cross-country to ambush their husbands they think are sleeping together," her thread begins. We know what you're thinking. Yes, it's exactly like Grace and Frankie.

The only thing different from the plot of the show is that these women hadn't met until the moment Colangelo witnessed at the airport bar.

One of the women has an extreme couponer's amount of gum in her purse. "You can't yell at someone with bad breath. My dad taught me that."
— BJ Colangelo (@BJ Colangelo)1509478020.0

One of the women had "an extreme couponer's amount of gum in her purse." Later in the thread, Colangelo started calling her "Gum Lady."

Eavesdropping is not encouraged, of course, unless it's a story as incredible as this one.

It's heartbreaking, of course...that is, until the two women start doing shots.

They've ordered shots. Based on their faces, one woman is a seasoned pro. The other has never had a shot in her entire life.
— BJ Colangelo (@BJ Colangelo)1509478327.0

Of course, the woman who ordered the shots became "Shot Lady." "My daughter's boyfriend thought my husband was gay," Shot Lady said. Oh, it only gets better...

The shots just kept on coming.

One of the women has a grandson. They're sharing pics of their kids' Halloween costumes. Shot lady: "Our husbands should be Bert and Ernie."
— BJ Colangelo (@BJ Colangelo)1509478857.0

Shot Lady's got a killer sense of humor! Good thing Gum Lady has someone like her at a time like this.

Then Shot Lady did it. She actually mentioned Grace and Frankie.

They're currently laughing at cute animal videos. This is so pure except I know gum lady is gonna cry at any moment.
— BJ Colangelo (@BJ Colangelo)1509479214.0

Apparently, gum lady doesn't like Jane Fonda very much. And after this experience, she might need a minute before she watches a show detailing pretty much exactly what just went down in her real life.

Minor update: The women aren't actually flying cross-country, just to Chicago, which apparently, is a 45-minute flight from wherever they are.

It seems for a second like this magic eavesdropping session might come to an untimely end. But wait!

Shot Lady is doing everything she can to keep Gum Lady's spirits high. They're truly in this together, and it's actually incredibly touching to witness...via Twitter thread of an overheard conversation, of course. But Shot Lady wasn't done yet. She had more words of wisdom for Gum Lady...

"Our husbands are f***ing, or we're both insane. Either way, we're going to be okay. I promise," Shot Lady told Gum Lady.

They keep pumping each other up:

Gum Lady: At least my husband's boyfriend has good taste in women." Shot Lady: "Yea. You're pretty okay too. We can do this." Gum Lady: "You're right. We can." And that was it.

Real life Grace and Frankie got up and left the airport bar. Colangelo had these final words of warning for the Mr. Shot Lady and Mr. Gum Lady:

"If your names are Jeffrey and Richard and you're on a 'business trip' in Chicago...your wives are coming for you. And they've bonded." Now it ends.