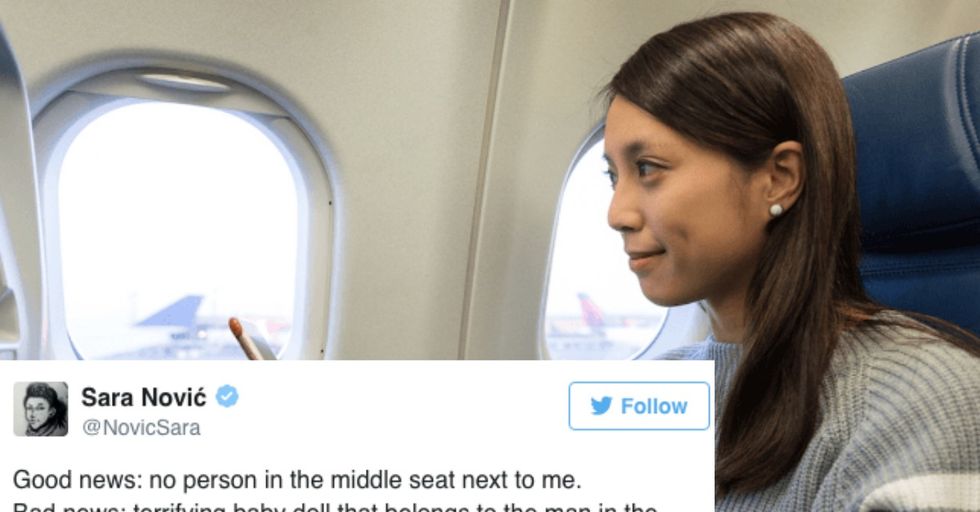 Flying sucks. Dealing with security sucks, and having to be in such close quarters with strangers really sucks. But when you don't have anyone in the middle seat, it's usually not too bad... Right?

We all have stories of sitting next to "that" person on a plane, but writer Sara Nović's story pretty much takes the cake.

To be clear, some dude put a terrifying baby doll in the seat next to her.

Okay... Weird. But sometimes people buy their guitars or other valuable fragile items tickets so they can avoid having them thrown around by careless employees. So it's not totally unheard of to buy an inanimate object a seat.

But the deeper you dig, the worse it gets.

Okay, well there goes any benefit of the doubt we were trying to give him.

Buying a ticket in the doll's name created quite an interesting problem for the TSA.

They were trying to match information for a person that doesn't exist.

Er, I guess they exist but... well you can see the confusion here.

Somehow, it doesn't end there for Sara.

They just suck a little bit more when you're sitting next to a probably insane person and their doll.

Eating an entire bunch of bananas as a snack is totally normal.

Usually, when someone is crazy, they aren't just a little bit crazy.

Where was the mystery man headed with his "companion"..?

"Pics or it didn't happen!"

Well, Sara did not disappoint.

Nightmare. Fuel. You think that would be the end of it for her, right? Just get off the flight and it's in the past. Well...

It didn't end with that flight.

This is the part where we would lose it. IT'S FOLLOWING YOU, GET OUT OF THERE.

At least she got to know the doll's name.

It's Barbara, by the way.

Apparently, even random airline staff wanted pictures of it.

Which is understandable for curiosity's sake, but when you actually see it you'll immediately regret it.

Sara got a picture from another angle, in case you didn't get enough of Barbara.

At least the doll is better behaved than a regular baby?

Sara didn't want to shame anyone, but the creepiness of the baby's - er... Barbara's face just really gave everyone the heebie jeebies.

Here's hoping Barbara and the mystery man enjoyed their vacation together at least.