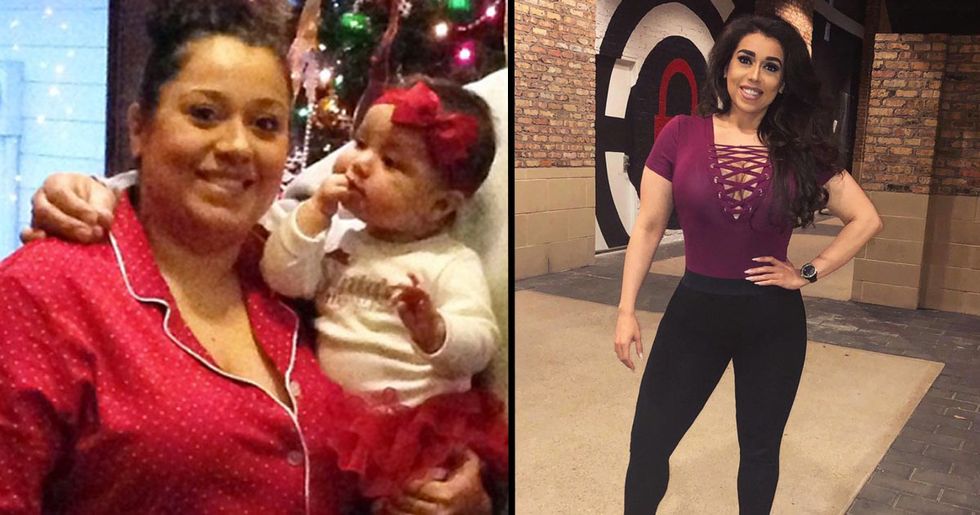 What’s the best source of motivation in life? Some people say it’s happiness, that you run faster when chasing pleasure. Some say it’s sadness; the push of fleeing pain. Well, in the case of Betsy Ayala, it was fury, and the will to rid herself of the trials of a broken heart.

After giving birth to her daughter, Betsy put on the pounds, reaching eighteen stone (120kg). It was at this time in her life that Betsy learned of her husband’s infidelity, and found callous messages to his mistress on his phone describing her as a "fat cow."

Betsy was furious, and harnessed that fury, letting it strike over one hundred pounds. Read the full story, and a few tips on how to stay safe while attempting to lose weight, here.

She reached the weight of eighteen stone, developing a problematic eating pattern.

That was when she found the messages...

Messages on her husband’s phone confirmed the worst - he was having an affair.

The messages were… not-so-kind.

The messages from her husband to one of his co-workers, with whom he was having an affair, described her as a "fat cow".

She took the anger and channelled it into her workout routine at the gym.

She started with a range of weight loss methods.

From cutting out sugary snacks to Zumba classes, she tried it all.

Betsy has since lost…

And she's now working as a Herbalife wellness coach. You go, girl!

And it’s not just the weight that she's lost.

As well as shedding the weight, Betsy also seems to have shed her resentment.

She sees the affair as a blessing in disguise.

"Now I honestly feel that what he did was a blessing because otherwise, I would have been the way I was forever."

She has a better relationship with her daughter because she’s happier.

"I was always very negative and had a chip on my shoulder because I was unhappy with me. I’m happier, I’m confident and most of all, I’m positive… I know that I’m capable of so much and I’m so happy to set a good example for my daughter which is extremely important for me."

"My ex-husband and I are actually good now. It took me a while to get to that place of forgiveness but what he did was about him and not me."

How did the internet react to this story?

We totally agree - and Betsy really does have great hair...

Many were grateful to Besty for sharing her story.

"I assumed that your before picture would be unattractive…"

We love seeing this lady getting the celebration she deserves!

And by "castle" he means… women? relationships?

This one worried us a little.

We hope that people aren't taking the wrong approaches to weight loss. Eating is most definitely allowed. Keep scrolling for some tips on how to stay safe while losing weight!

This is our favourite response.

We hope people aren't getting the wrong idea, though.

It’s important to be healthy and to feel confident and comfortable, of course! But we think that, really, it should only be as a vehicle for experiencing and achieving great things; we don't think that our figures should be the be-all-and-end-all of life. And we absolutely do believe that weight loss should for you.

But, of course, we're super proud of Betsy for doing what's best for her!

It's important that, if you want to lose weight, you do it healthily.

Studies show that losing over two lbs per week can put you at risk of muscle loss, gallstones, nutritional deficiencies and a drop in metabolism.

So be careful not to push too hard.

Be careful not to trust dangerous commercials.

So many people are desperate to lose weight and a lot of companies prey on that.

Here are some tips on how to spot things to avoid.

Weight loss scams will often slap on these phrases to inspire confidence in the buyer.

But the boundaries to declaring your product "laboratory tested" and "backed by science" are notably lax.

This really means nothing…

And beware of unrelated studies.

People won’t often process the clinical know-how to properly read the scientific literature provided, but beware long lists of clinical studies - this may be the product trying to mask its uselessness.

Sometimes products will describe results as "significant" - again, this means nothing.

Who are you? Willy Wonka?

If they offer a money back guarantee, it’s likely because they have to...

If you feel inspired by Betsy's story, that's great! We're super happy for you. But if you're aiming to lose weight, we implore you to do your research, to stay safe, and do it for the right reasons. We're totally backing you!