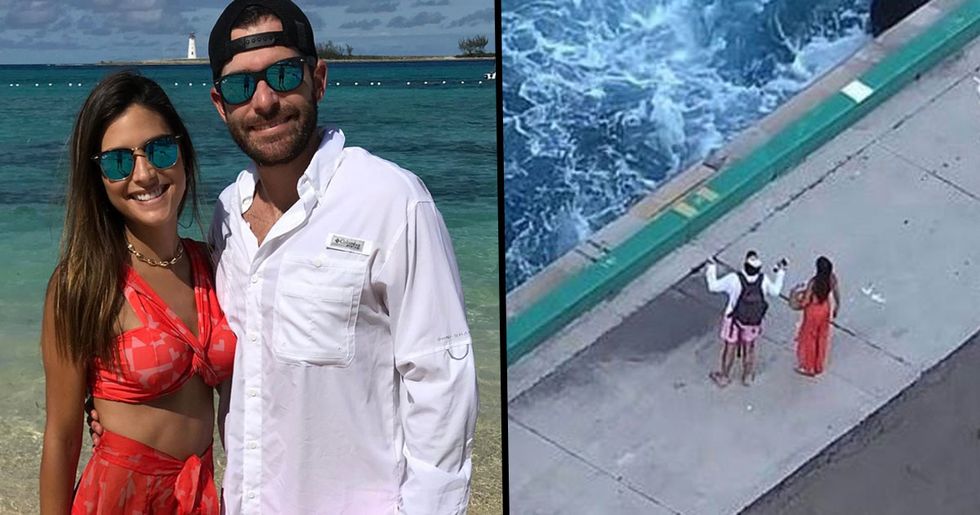 For those of us with a more anxious disposition, the idea of being late and missing something important is one which keeps us up at night. But that nightmare became a reality for one couple, who went viral after they, quite literally, missed the boat.

The hapless pair were left stranded in the Bahamas after being almost an hour late for their luxury cruise ship. A video of the pair went viral, and many laughed as they stood dejectedly on the dock, watching their ship pull further and further away. The internet primarily responded with laughs, and a lack of sympathy for the "selfish" pair.

Well, the disorganized woman from the infamous vid has spoken out about what happened next. Speaking to Insider, she shared how they managed to get home after their escapade. And according to reports, although she takes the blame for her own tardiness, there was actually a fairly reasonable explanation for her (and her partner's) late return.

A cruise is designed to be the ultimate experience in relaxation.

Once you board to ship, your worries can just float away. Every whim can be taken care of, and you're never short of fun activities and things to do.

A cruise ship is a self-contained world. If you're on it, that's great - you don't have to think too far beyond the limits of the boat. But if you end up on the other side, you may face some problems.

For example, during one of your cruise's excursions.

Once the ship docks, passengers are encouraged to explore the surrounding area, absorb some culture and take in some of the local sights and sounds. But there are always strict instructions on when they need to be back.

Well, let's just take a look at an example case. The story takes place in Nassau, the capital of the Bahamas. It's highly picturesque and commonly has beautiful weather conditions.

A cruise recently docked their to allow passengers some time to explore.

But for one couple, the time constraints were too great. They ended up being left behind on the docks as their ship pulled away, refusing to wait for them any longer.

According to reports, the couple were nearly an hour late.

They missed the call for passengers and arrived just as the boat pulled away. It was tantalizingly close, as the pair had to watch it grow in distance as their hopes of rescue were dashed.

For anyone who missed it, here's the video.

The shots of the couple first running to attempt to catch the ship, then becoming more and more dejected as it became clear that wasn't going to happen, went viral.

And most responses weren't too sympathetic.

Many found the whole story hilarious. It was touted as a prime example of instant karma. The couple didn't care about holding up an entire ship of passengers, so getting left behind seemed only fair.

Even those who didn't laugh found it hard to feel too bad for the pair.

Missing a luxury cruise and ending up stranded in the Bahamas doesn't sound like too bad of a deal, after all.

But it seemed no one really considered one thing.

What happened to the couple next? It seems unlikely that the two decided to give up on getting off the island, and resign themselves to new lives in the Bahamas.

Well, the internet managed to track down one of the pair to find out.

The woman who was part of the unfortunate duo is actually a telvision personality and social media influencer from Costa Rica, called Maria Gonzalez Roesch.

The cruise she was one was actually a part of her honeymoon.

The other party in the unlucky incident was Roesch's new husband. She told Insider that while it was his first cruise, she'd been on a couple before.

Roesch gave a reason for their lack of timekeeping.

It turns out that this stop of the ship was unusual for the ship in terms of timing. The boat left Nassau around two hours earlier than it had at other stops along the way.

Roesch promised she had been diligent with her tardiness up until that point.

As a cruise expert, Roesch knew that keeping on top of the itinerary is basically the number one rule of the trip. She'd just assumed the itinerary would stay the same, day to day.

In fact, Roesch had been anxious about this very thing happening.

She confided in Insider, saying, "It was my third cruise so I kind of know how it works, and I can't believe this happened to me. I was always checking the itinerary because this is a nightmare that everyone has."

Roesch and her new husband had already enjoyed the majority of the cruise.

The ship (Symphony of the Seas, a Royal Caribbean cruise option) had already taken the pair around many beautiful destinations around the area.

The couple had already experienced a fair few boat stops, without missing the ship.

The cruise had already taken the couple to Honduras and a few destinations along the coast of Mexico. The stop in Nassau marked the approaching end of the trip.

In fact, the next stop was set to be their last.

After departing from the Bahamas, the ship was set to sail to Miami, Florida, where the trip would come to an end.

On the fateful day in Nassau, Roesch admitted her husband had been nervous.

He asked Roesch what time the boat was set to leave, but as it had always been 5:30 in the past, she assumed the same would be true.

Eventually, Roesch gave in to her husband's nagging.

She decided that since he was so sure they needed to get back, she decided to admit defeat and head back with him. But because she was still convinced they were early, they took the walk at a relaxed, leisurely pace.

By the time Roesch realized her mistake, it was too late.

She said when she got to the port and found out the boat was leaving earlier on that day, she felt as though she had a "hole" in her stomach.

The fact that they only just missed the boat was particularly stomach-wrenching.

She described the irritation to Insider, saying, "When we arrived at the pier, it was frustrating because the cruise was right there."

Because they were still close to the boat, the couple decided to beg.

The two tired desperately to get crew members to reconsider. "We started yelling to them like, 'Hey, please don't go! Let us in! We're so close! The cruise is still here! Please, please!'"

It was only when the crew members refused that the couple realized the gravity of their situation.

The vast majority of the couple's passports, including their valuables and, even more crucially, their passports, were still trapped on board the ship.

All they had was what they'd carried with them for the day.

Unsure what to do next, the couple went to the Department of Immigration for advice. Surprisingly, the employees were massively understanding, and told the couple this was a fairly common occurrence.

In fact, the two weren't even the only passengers left behind that day.

The change in schedule for the ship had left other passengers confused and stranded, too. There were six in total. The reason the other four weren't captured on video was that they were even later than Roesch and her hubby!

A small boat was able to collect the couple's passports from the cruise ship.

Then Roesch and her husband were allowed to fly to Miami in order to meet the ship and collect the rest of their belongings.

There was just one problem.

The small boat only collected essentials for the couple's flight, and didn't think to bring them any clothes. This meant the pair had to travel in what they'd been wearing for their day on the beach.

The problem was bigger than just embarrassment, Roesch explained.

She admitted to Insider, "We were freezing at the airport! Alessandro was wearing his banana-print trunks and I was wearing my orange swimsuit."

And although the experience was stressful, it seems the couple have a sense of humour about it.

"At the time it's frustrating and you feel really stupid because the cruise is always informing you by the speakers and the itinerary. Now it's such a funny experience, and we have a good story to tell our future kids, if we have any."

We have to say, we're impressed by her positive attitude!