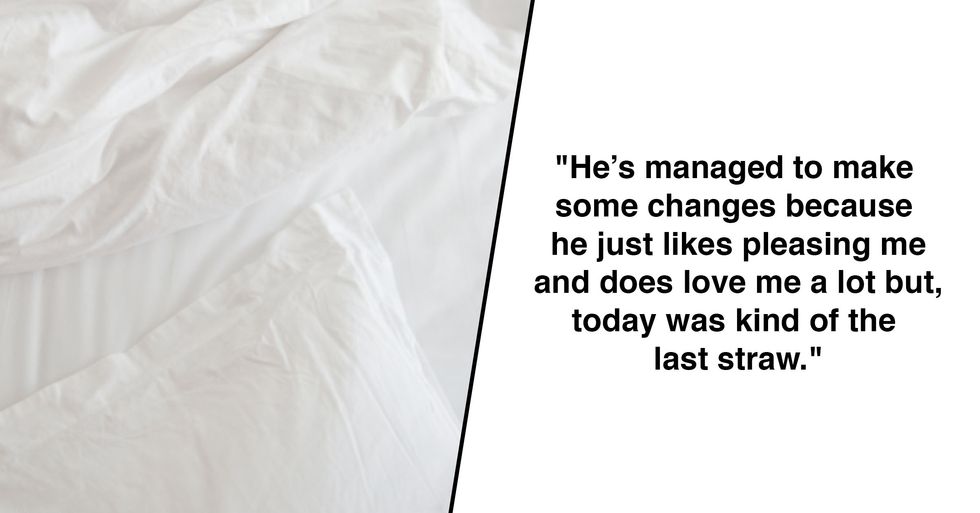 Pet names are a crucial part of a relationship. While some couples opt to use them in public, others like to keep them a secret.

But this one woman recently exposed her boyfriend after he called her the strangest nickname during a failed bedroom talk attempt. And people have taken to social media to give her some advice on what she should do next.

Keep scrolling to see what nickname completely turned her off...

From the outside, it can be easy to give advice on a particular situation, but it becomes more difficult if you're in it yourself.

This one-woman hit an obstacle she just could not overcome...

She was left disgusted after her boyfriend called her a weird-ass nickname during a failed bedroom talk attempt.

I mean, nicknames are cute... right?

Most relationships have cringe-worthy nicknames that they only use when they're alone, but this particular woman wished she didn't have to hear hers.

She claimed that she had "never been so turned off."

The concept of "bedroom talk" should be considered an art that requires skills and tact. However, it was clear that her boyfriend was not a master in this field.

In fact, it was so bad that it left her contemplating her entire relationship.

While posting anonymously on a Reddit thread, the home of painful relationship stories, she went through the entire incident.

She started off giving us a little bit of general background on their relationship...

"So me and my boyfriend have been dating for six months, we have a pretty normal relationship but we get into a good amount of arguments..."

And shockingly (but not so shockingly), you'll never guess why...

"It usually revolves around stupid things that he [her boyfriend] says."

But then things take a weird turn...

"A lot of times I don’t find my boyfriend that attractive, I’ve managed to not let this affect how our relationship has gone because I really love him but I don’t know if I can take this anymore." This just ain’t it, sis.

She continues writing this:

"The [intimate time] we have used to be amazing, [but] as of lately I’ve been asking him to spice things up. He’s managed to make some changes because he just likes pleasing me and does love me a lot but, today was kind of the last straw."

She then started describing why she wants to end the relationship.

"... in the heat of the moment, he said something... and I've never been so turned off by him in the past months that we have been dating..."

She then asked for advice from fellow social media users...

"I don't know what to do," she explains. "Aside from this, the relationship has gone to shambles... It wasn't just the comment but from so many other stupid [things] he says."

On that note, Twitter users decided to give her some brutally honest advice.

This user summed it up pretty well.

While this user had some similar advice:

Girl, what are you doing with him?

The general consensus stated that she needs to leave him...

People were confused as to why the woman was confused about what she should do...

The latter tweet comes after she revealed that her man had been involved with some pretty horrid stuff...

"All he does is play video games, he's super dirty and he's done disgusting things and I just don't see a future with him..." Thank God she didn't go into further detail.

Strangely, she also added this to the end of her rant:

"I've realized I don't want to be with someone who calls me that...and consider spicing things up. Combining all these factors, what do you think I should do?" Girl, I've never been so confused in all my life. The problem isn't what he called you, it's also everything else.

And this user emphasized that:

The nickname was pretty strange though...

Apparently, he referred to her as his "dirty little tomato."

I would have just gone with "babe" or something less imaginative...

But because of all the other problems in the relationship, I think it's best to call it quits, little tomato. Oh God.

If you want to read more about relationships that quickly went downhill...

Keep scrolling. The next story will probably make you want to delete your social media...