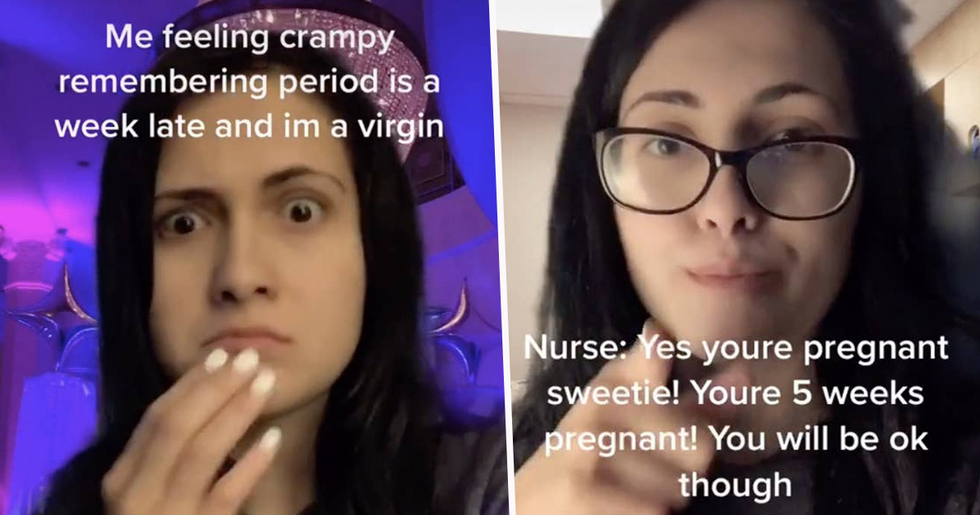 A TikTok user has shared her experience of falling pregnant without having sex... And now, people are hailing her as a modern-day Virgin Mary.

We all know about the birds and the bees.

From children, we are taught about the natural phenomenon of "how babies are made."

A man and a woman, who love each other very much (or sometimes not so much), will come together to make a baby... through sex.

Yep, it's a pretty awkward chat to have with your little one...

And many parents opt for the "a stork delivered you to our doorstep" method to save themselves the embarrassment.

And, by the time we're adults, we all know that, in order to fall pregnant and have a baby, a woman's egg needs to be fertilized by a man's sperm.

But these rules don't apply to some women...

Apparently. Samantha Lynn Isabelle, a nineteen-year-old TikToker, has come forward with her outlandish tale of a magical, sex-free pregnancy.

Well, she claimed that she'd never had full penetrative sexual intercourse, that is.

But, regardless of this, she somehow fell pregnant.

Well, Samantha herself seemed a little unsure at the time...

But, since sharing her story onto TikTok, people have been hailing her as the modern-day Virgin Mary.

She shared her news via the streaming platform...

Because how else can young people share anything these days?

She acted out the moment she felt that "something wasn't quite right."

Despite having never had sex, Samantha had a hunch that there was something a little more happening, especially when her period was late.

She even mimicked the moment she broke the news to her boyfriend, Alex...

Who, quite understandably, was very confused by what he was hearing... You know, considering they had never actually sealed the deal.

But the couple had engaged in some sexual activity in the past...

So Samantha decided to consult with a doctor, you know, just to be on the safe side.

And had to explain how she was a virgin and was suspecting a pregnancy. I would love to hear that call.

But, upon going to the doctors...

Samantha was confirmed to be 5 weeks pregnant.

Understandably, she was very overwhelmed by the news...

And was mainly preparing herself for the influx of "Virgin Mary" jokes.

But, also, she found herself to be incredibly anxious over the shock pregnancy.

"I did not feel ready to have a child," she told Buzzfeed. "I had dropped out of high school twice due to my anxiety disorder, [but] went back to finally finish. I [also] had intentions of going to college after graduation."

However, despite her doubts and worries, Samantha went ahead with her unexpected pregnancy...

And eventually gave birth to Bentley, who is now 5-years-old.

How exactly did it happen?!

Well, it turns out that you don't actually have to have penetrative sex to fall pregnant.

"It doesn't matter what puts it there — whether it's a penis, finger, turkey baster, you name it — but once it's there, it can travel through the cervix, into the uterus, and rendezvous with an egg in the fallopian tube and fertilize it."

And, just to make this strange little story even better...

Little Bentley is now a big brother! Baby Theo arrived into the world last year (through natural conception, this time.)

Samantha is now the proud mother to 2 boys...

And she couldn't be happier!

You can watch her original revelation video here...

Which you should all take away as a little reminder that anything can happen... So stay safe out there! For more wild pregnancy stories, keep scrolling to see the baby who was born clutching the contraceptive coil his mom had implanted to stop her from getting pregnant...