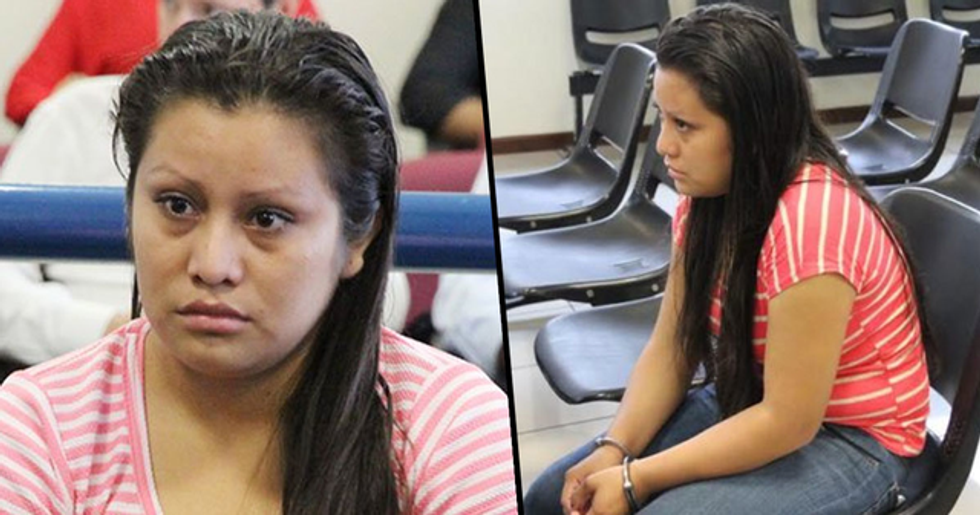 Woman on Trial For Having Stillbirth, For the Second Time

In the most recent update on the world's apparent war against women, a woman in Salvador has been trialed in court for the second time for giving birth to a stillborn baby.

Evelyn Beatríz Hernández Cruz was only nineteen when she was slapped with a life sentence back in 2017 after prematurely giving birth to her rapist's stillborn child. But when she was released thirty-three months into her sentence, the world breathed a sigh of relief. For a moment, we actually believed that El Salvador had seen the error in its ways and that justice had finally been served.

How wrong we were.

News has come in this week that Evelyn has been dragged back into the courtroom to be tried again for the same alleged crime of "aggravated homicide."

Keep scrolling to hear Evelyn's story, which some people are saying is a scary insight into what our country could one day become.

El Salvador has one of the worst records when it comes to reproductive rights in the world.

In 1998, after an onslaught of pressure by the Catholic Church, Article 133 of their Penal Code made abortion illegal in all circumstances, without exception, and punishable by up to 8 years in prison.

Though much longer sentences have been handed out in the past.

Prison sentences of up to thirty years have been handed down to innocent women when a judge has determined that “homicide" rather than abortion had occurred... though officials have previously proposed for even longer punishments.

Politicians have previously appealed for longer and harsher punishments.

Back in 2016, male (of course) members of the conservative opposition party, the Nationalist Republican Alliance, submitted a motion to reform article 133 of the penal code, calling for punishments to be increased to a minimum of thirty years and a maximum of fifty years. All for having a miscarriage.

The world was disgusted.

@halfadams @nayibbukele #justiceforEvelyn This situation is about the subjugation of women in a paternalistic socie… https://t.co/Smai4pNTI8
— Yurina Melara (@Yurina Melara)1561586373.0

And many argue that the barbaric laws are put into place to control women and their bodies, rather than out of concern for the well-being and rights of the fetus.

Since 2000, at least thirty-five Salvadoran women have been convicted of supposedly "killing" their newborns after they suffered miscarriages or stillbirths.

And the case of Evelyn Beatríz Hernández Cruz made headlines all over the world.

Back in 2017, Evelyn Beatríz Hernández Cruz was horrifically sentenced to thirty years in prison after she gave birth to a stillborn baby.

In 2015, aged only eighteen and in her first year of college, Evelyn claims that she was raped by a local criminal gang member, and subsequently became pregnant with his child. In April 2016, she went into labor prematurely at thirty-two weeks.

Her baby was delivered stillborn.

Hernández, who apparently had no idea that she was even pregnant at the time, went to the latrine in her small home and delivered a stillborn baby into the toilet. She then started bleeding profusely, causing her to lose consciousness and pass out.

She was admitted to the hospital.

Hernández was found passed out and covered in blood by her mother, who quickly took her to the nearest public hospital without realizing that her daughter had suffered a stillbirth.

However, the police were alerted upon her arrival.

At the emergency room, medical staff called police and prosecutors and, just 3 days later, she was transferred to a women’s prison to await trial for "deliberately" killing her unborn baby.

Police believed that she had murdered her child.

Though the forensic evidence suggested otherwise. The medical coroner recorded aspiration pneumonia as the cause of her baby's death and discovered substances in the baby's stomach and lungs that would suggest the death to be a result of natural causes.

These autopsy results should have cleared Evelyn's name.

But they didn't. In July 2017, despite her lawyers arguing that she had, in fact, suffered a stillbirth due to pregnancy complications, Hernández was sentenced to thirty years in prison for aggravated homicide.

Amnesty, the world's largest human rights organization, spoke shortly after her sentencing: "El Salvador’s anti-abortion law is causing nothing but pain and suffering to countless women and girls and their families. It goes against human rights and it has no place in the country or anywhere."

Women all over the world stood in Evelyn's corner.

And, miraculously, it worked. In February this year, El Salvador’s supreme court overturned her thirty-year sentence.

An appeal judge quashed her conviction.

Her sentence was suspended on the grounds that the evidence presented at the trial did not prove that Hernández had intended – directly or indirectly – to harm the fetus.

Evelyn was, once again, a free woman.

After serving thirty-three weeks (almost 3 years) behind bars, justice was finally served and Evelyn was able to walk free.

On the morning of February 15th, Evelyn emerged from the prison, beaming and visibly emotional, to crowds of supporters and chants of "you are not alone!"

Evelyn finally had the chance to resume her normal life.

Since her release in February, the now-twenty-one-year-old received treatment for her physical ailments caused by the malnutrition in the prison, went back to school; she even started a part-time job.

Evelyn had a chance at returning to normalcy. Footage of her sentencing broke the hearts of people all over the world and showed there was no justice helping this woman.

From her original sentencing, video footage showed her being comforted by her lawyer as she sobbed into her arms, highlighted the disgusting reality of the situation, which was a teenager being handed a life sentence for suffering a stillbirth.

But, now, Evelyn is heading back to the courtroom.

Because prosecutors are retrying her on the exact same charge.

Sadly, a retrial has always been inevitable.

Returning to the courtroom has been looming over her since she first regained her freedom, as the courts have been preparing to relitigate her case.

Paula Avila-Guillen, director of Latin America initiatives at the New York-based Women’s Equality Centre, thinks that she has the answer. “Why? Because in El Salvador all women are considered second-class citizens, and poor vulnerable women like Evelyn, third-class citizens, so the full weight of the justice system is thrown at them regardless of the evidence."

People are calling for #JusticeForEvelyn.

In El Salvador, a woman who was raped and became pregnant is now on trial for attempted homicide after suffering a… https://t.co/7NaMYQeJwo
— Patrick J Adams (@Patrick J Adams)1561403307.0

The unjustness of this case has sparked worldwide attention once more, and people online are calling for her case to be dropped.

Though, sadly, El Salvador isn't alone in its stance on women's rights.

@jes_chastain @nayibbukele this is happening in all Latin America, where abortions are illegal in almost every country. #AbortoLegal
— carito (@carito)1562778474.0

These laws are actually in place all over Latin America.

And some believe that our country isn't far off this barbarity...

A 21-year-old rape victim in El Salvador is being tried for attempted homicide after having a stillbirth. This is w… https://t.co/PRWIm8eSqT
— Jessica Chastain (@Jessica Chastain)1562754365.0

The issue around abortion in our own country is tense, and some people believe that a full abortion ban could lead the States into similar waters.

People are desperately trying to turn things around.

Twitter users far and wide are urging people to act if they believe that what happened to Evelyn was wrong.

And, recently, the United Nations Committee on the Elimination of Discrimination Against Women urged El Salvador to review Article 133 and related aspects of the Penal Code, at least in cases of rape, incest, threats to life and/or the health of the pregnant woman or severe fetal impairment.

We may be waiting a little while for a change, however.

Considering that the Nationalist Republican Alliance still holds a majority in the legislature, the chances of change are slim. There are no apparent signs that the law will be modified anytime soon — and any attempt to do so will likely be met with fierce opposition, both from the church and the conservative political circles.

And other women are still suffering.

Evelyn is just one of dozens of women in the Central American country, which bans abortion entirely, who have been accused of murder by the state after having miscarriages or stillbirths.

At an earlier court appearance, Hernández, who has pleaded not guilty for the second time, said: “I trust God that I will be fine. I know that good things are coming for me, I am innocent."