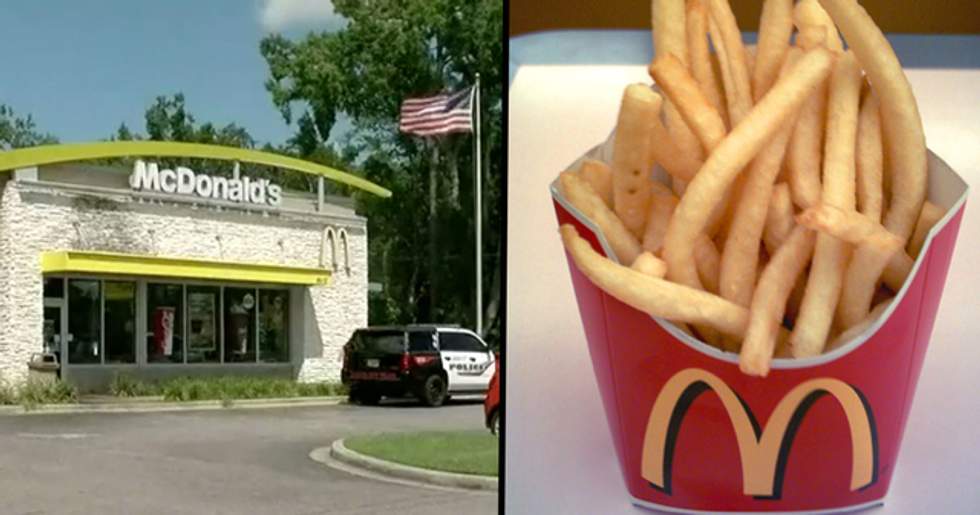 Woman Opens Fire in McDonald's Because 'Her Fries Were Cold'

There's nothing worse than someone getting your McDonald's order wrong.

It's happened to all of us - you asked for a Big Mac and you get a Quarter Pounder with cheese. Not cool.

Though it's always a gut-wrenching moment, you usually just make do with what you have, or just complain about the employees to your friends if worse comes to worst. What you don't do, however, is storm the McDonald's branch in question and open fire at the terrified employees.

Amazingly, this is what one unhappy customer did when she discovered that her fries were too cold for her liking. Upon her luke-warm discovery, the woman returned to the branch in Georgia, all while wielding and firing a gun.

It's a miracle that no one was hurt...

Because McDonald's isn't just a food choice... it's a lifestyle.

Combined with our absurd love of firearms, however, things can often get dangerous.

As a country, we don't have a particularly great track record with guns, do we? There have been many instances of disgruntled customers resorting to gun use in McDonald's restaurants when things weren't quite going their way.

People have pulled out guns at their local Mcdonald's for the most ridiculous of reasons.

Like the drive-thru queue being too slow. Okay, this is admittedly very annoying. But annoying enough to whip your gun out? I don't think so.

One customer got sick of waiting.

Scott Biumi, a twenty-five-year veteran of DeKalb County Police (yeah, this guy was a cop...) pulled a gun onto a fellow customer who was waiting ahead of him in the queue. Obviously, he was fired shortly afterwards.

And one woman actually fired a round into a drive-thru...

It was the second time that day that she had received a bacon-less burger...

So, in her bacon-craving frenzy, the woman fired a round into the McDonald's drive-thru, which was based in Michigan. She was subsequently sentenced to 3-7 years behind bars.

So, obviously, we have a bit of an issue with firearms.

With the easy accessibility of guns in this country, it's becoming far too common for people to resort to the weapons when losing their temper.

The most recent incident happened in Georgia.

Staff at the Garden City branch of McDonald's were left terrified this week after a woman fired her gun inside the restaurant... all because her fries were cold.

Lilian Tarver really wasn't happy about the temperature of her fries.

Though it remains unclear what the twenty-seven-year-old ordered, and whether the rest of her meal was to a satisfactory temperature, one thing for certain is that the fries were disgusting enough to pull out a gun.

She initially accepted the food without any complaints...

The restaurant's manager says that the woman initially left with her order without any fuss, but quickly returned, claiming that the fries were cold and demanding a fresh batch.

Upon her return, she was visibly agitated.

The restaurant manager recalled how, despite being offered a full refund and new fries, the woman grew steadily more enraged over the situation, and followed the worker through to the kitchen.

A full brawl broke out.

Speaking to WTOC about the incident, McDonald's employee, Lynn Watson, recalled how the fight started: “She basically kept going back and forth with me, and she took her drink and threw it at me and the manager, and then proceeded to come behind the counter."

The employee had to act in self-defense.

“We were physically fighting because I had to grab her because she was putting up a set like this, and I had to seize my moment when I knew I could. When she bent down, I grabbed her hair and just started slinging her across the floor," Watson said.

Tarver then left the restaurant.

The employees feared for their lives.

Thankfully, no one was hurt.

But, despite none of the employees being hurt, Watson says that she doesn't feel safe working there anymore. “I fear for my life, and my family fears for my life."

Other employees were left shaken by the incident.

Watson says that she wasn't the only employee shaken up after the aggressive order - she says that her colleagues, who were on shift at the time, are now fearful at work, and there were even teenagers working summer jobs there, too.

The police were quick to arrive at the scene.

Police arrived on the scene at about 2:45 p.m, just after Tarver had driven away. However, it didn't take them long to find her, and she was promptly arrested at Liberty Parkway and then taken into custody without incident.

The power of being hangry... It really brings out the worst in some people, doesn't it?

Think you've been to almost every McDonald's? Think again. The golden arches have a new location, but this one is a bit smaller than the others. In fact, it's a McDonald's just for bees. Bees? Yes. Bees.